More
JesuitRoundup.org is brought to you by:
News The Evil Dead: Celebrating Forty Years of a Goretastic Masterpiece
Facebook
Twitter
Email
Print 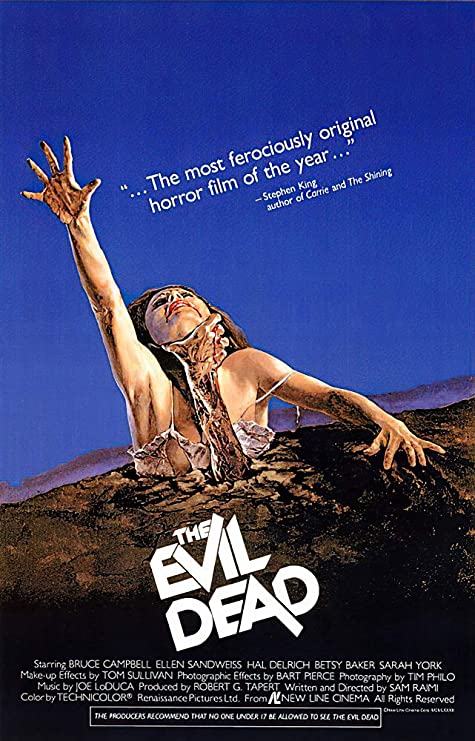 Most of my film pieces on this paper seem to use the word “masterpiece” a lot. I hate using it because it’s over saturation devalues the phrase. But I can’t help it, Sam Raimi’s The Evil Dead is a goretastic masterpiece, and I want to celebrate it forty years after its release.

Just as entertaining as the film itself is the history behind it. The Evil Dead‘s inception is one of the greatest filmmaking stories of all time.

The story begins with a group of friends, consisting of Sam Raimi, Bruce Campbell, Rob Tapert, and many others. These friends would make Super 8 comedies in their free time and screen them to classmates at school. The success of their comedy film The Happy Valley Kid prompted the businessman of the group, Rob Tapert, to think of making a feature. With Sam Raimi on board to direct and Campbell to star, the group of friends decided to create a horror movie, as it was the best way to make money on a movie at the time.

With high hopes and no money, Raimi, Campbell, and Tapert set out to make Book of the Dead (if the title seems confusing I’ll explain later.) Their lack of money and reputation made it a difficult movie to finance. So Raimi directed a thirty proof of concept film titled Within the Woods and screened it to financiers. These financiers were not typical Hollywood execs like one would expect, but rather local dentists, doctors, businessmen, and “anybody who was financially capable of losing all their money.” Bruce Campbell even recalls screening Within the Woods in the detergent aisle of a grocery store during its closing hours. Miraculously, the trio financed $85,000 dollars to begin production on Book of the Dead.

In November of 1979, a then twenty year old Raimi began directing Book of the Dead. The production was riddled with issues. The cabin that the film was shot in had to be cleaned because it was originally covered in animal feces, only to then get covered by mountains of fake blood and coffee creamer. The production was messy and grotesque, and the 16mm camera would constantly freeze in the extremely cold temperatures. These numerous difficulties halted the production for long periods of time.

The production was overlong and over-scheduled, and they never got enough shots per day. The filming itself was quite dangerous, with inexperienced actors and crew performing numerous dangerous stunts. Bruce Campbell recalled his brother falling off a cliff during production. (Thankfully the brother survived.) The film felt like it was being made by a bunch of kids because it was made by a bunch of kids.

Eventually, too many actors were either fed up or had other plans, so the production was left with only five people to shoot and star in the movie.

With no money and no actors, Raimi had to employ his famous technique of fake shemps. Fake shemps were stand ins for actors who weren’t available. The Evil Dead has twice as many fake shemp credits as actual cast members. This lead to some charmingly amateurish moments, like when a female character Sheryll is played by Rob Tapert for a scene.

After twelve weeks of shooting with numerous reshoots, and $250,000 spent, The Evil Dead was finally finished. The final film is a beautiful display of juvenile creativity, filled with some truly stunning moments, good and bad. For every out of focus shot, there is one with more inventive visuals than 99% of what’s out today. For all of the amateur special effects, there will be something undoubtedly impressive. Where the film lacks in money it overflows with passion and care.

So do yourself a favor and watch The Evil Dead this Halloween.

Tune into The Roundup for more film analysis!