More
JesuitRoundup.org is brought to you by:
The Ashmore Family
News Campus Life What’s Cooking in the Kitchen?
Facebook
Twitter
Email
Print 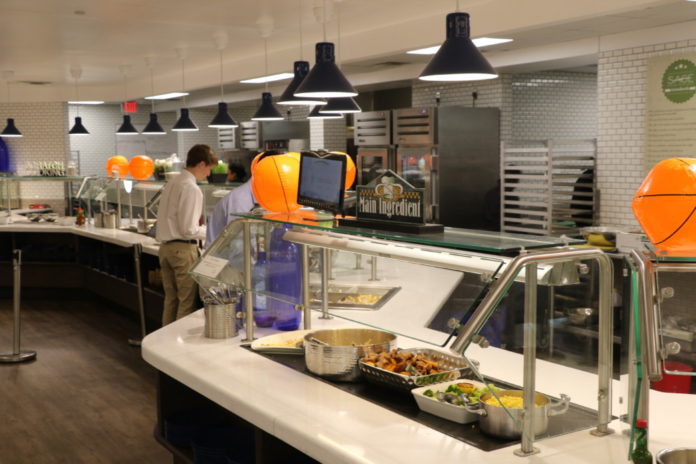 “One cannot think well, love well, sleep well if one has not dined well.” (Virginia Woolf)

Ever since the school year began in late August, SAGE Dining Services has been making breakfast and lunch every day for Jesuit students and faculty. I was able to sit down and talk to the Executive Chef, Ryan Messina, and the SAGE Food Service Director, Vinny Tellini.

Q: What is the company, SAGE?

Chef Ryan: So I work for SAGE Dining Services and they have a great platform. So, it’s all about cooking freshly-made food to order. Nothing pre-packaged, nothing from a box, just scratch cooking, I guess y’all seem to call it in the South here. I’m kinda new. I transferred from another venue, actually came in temporarily and I loved being here. This school is awesome. [The students] are so nice, everybody is great, the teachers are wonderful, so I’m staying. I’m super happy.

Q: How did Jesuit and SAGE come together?

Chef Vinny: As you know, Ursuline…[has] been using SAGE for a very long time, at least six years. [Jesuit] wanted to go in a more healthy direction, a more home-cooked, scratch-made direction, and with the renovations of the entire facility, they thought that bringing on SAGE from what they’ve seen at Ursuline and other schools were the best bet.

Q: What was it like coming from the gym into the new cafeteria? 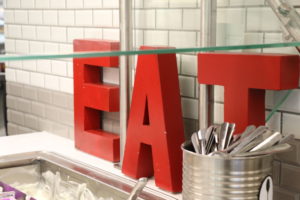 Chef Vinny: A relief. Starting out, it was insane. We had inventory in four or five different areas all across the school. Keeping track of all of that, I also had different team members, different groups of my team, in three or four different locations all around the school, so I got a lot of steps in; I had to literally make rounds around the whole school all day long. I think that it was a struggle, but we got into a rhythm and it was cool seeing everybody come together and get the job done like that.

When we came from [the gym] to [the cafeteria], it was just this huge move and transition. Everybody was really tight-knit from what we went through in the gym coming into [the cafeteria], which really helped. When we got into here, it’s a whole different set of struggles because…now everybody’s got to find their place. In [the gym], it’s just like, “Okay, what do you need? What do you need,” and then here, everybody’s got to have a certain area that they work so that everybody does their part and gets their job done.

Chef Vinny: Really, it’s not that bad. I’d say the most work is getting ready, prepping. And then once lunch starts, it’s just keeping things filled up and making sure that you’re just running around checking everything because it’s all self-serve.

Q: Do y’all have any jokes or fun behind the scenes in the kitchen? 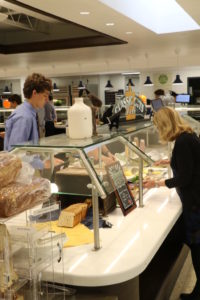 If you come into work and you’re not happy, and being in that environment, it’s going to be the worst ever. So I’ve always tried to create a fun environment and make sure I’m that one, that if someone’s not in a good mood, I’m pulling them out of it.

Chef Ryan: I decided to stay, I mean I love it here. It speaks volumes. I came in temporary, and I was like, “No, I want to stay.” This place is fun, it’s good times. The staff’s great, great fun, all of them, there’s not a bad one in there.

Q: Anything else you want the readers to know?

Chef Ryan: Really, you know, what we need from the community is a little bit of feedback, what do they like and what don’t they like. Because when we construct the menu, we’d love to know what they like.

Chef Vinny: I’ll say, through the app is the best way. I have a lot of people that, well now it seems like it’s kinda dying down, but near the beginning [of the school year], I had a lot of people that are grading the food, but then not responding to my responses because I respond to every single one. 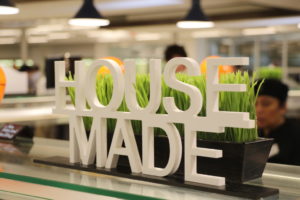 And I’ll say, “Hey, thanks for your feedback, sorry you didn’t like it” or “Oh, thank you for liking it,” but I’ll ask them, “Hey, any suggestions” or “Okay, you don’t like mashed potatoes, what other starches would you want to see?”

Chef Ryan: Because we’re writing the menu right now, and we’re done with this menu, but the next menu for next year, what do y’all want to see? What haven’t you seen? You know, give us some great ideas. We’re always up for that, as long as we can execute them. [With a] limited amount of space, it has to be smart for the kitchen.

Q: Do you have to worry about different allergies when preparing the food?

Chef Vinny: So, SAGE is a company that does the most extensive work with handling allergens that I’ve seen. There are systems they have in place with the allergen tagging that is on the tablets. I don’t know if anyone’s ever noticed that. I know most of the boys don’t even pay attention to what it says on there, they just go and get the food, but on the tablet, you can see the icons for what allergens are in each dish. There’s a legend on the bottom of the table that tells you what they stand for. 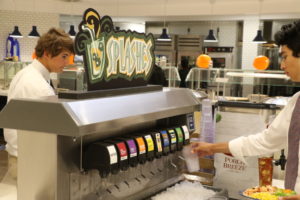 Now, Jesuit as a school, they wanted the boys to take the responsibility themselves to handle their own allergens given that it’s a high school and they’re preparing for college. So, in lower-school campuses, we will literally make plates, tray-up things, for certain kids and we’ll have a list and handle them very extensively.

Here, it’s a little bit looser because the school wants y’all to handle it yourself, but that’s why we have those basic things in place so that y’all can do it on your own.

Q: Any other recommendations for the students to do in the future?

Chef Vinny: Don’t take handfuls of crackers whenever they’re walking out. Cleanliness at the stations. You’ve probably heard us preach, “Bring your plate to the food.” That’s very important because it just helps us be able to give y’all better product. If we’re busy trying to clean up after everybody, then it would hold us back from being able to execute the meal smoother. 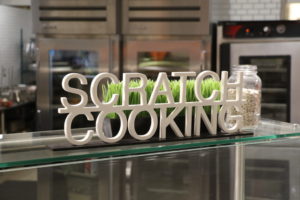 And then also just, kids just leave their cups on the serving line, their bowls. They just leave stuff everywhere. So, anything as far as cleanliness will help us out a lot.

Panini bags. Use the bags. And I get it, I get it, they don’t toast as good, but if anyone of y’all had to go clean those panini machines, you would be like, “I get it.”

Chef Ryan and Chef Vinny can be contacted at sagedining@jesuitcp.org.

Check back to The Roundup for more information on SAGE!