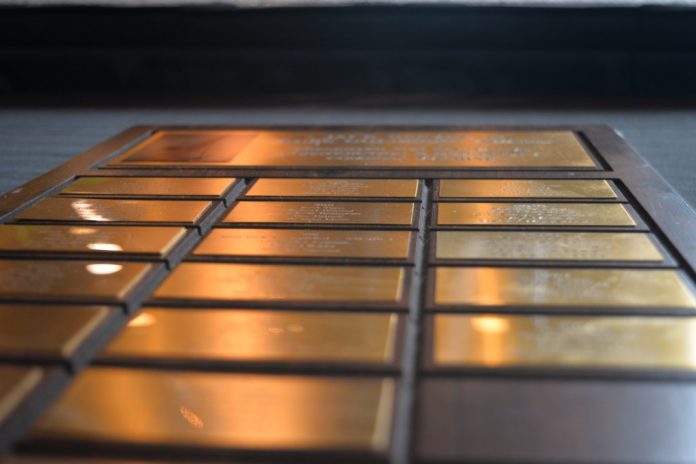 “It was really meaningful to receive any award because it was gratifying to be recognized for an activity or class that you put a lot into,” Michael Bain ’18 commented on the award. “I also enjoyed seeing my classmates be recognized for their efforts, especially when they were surprised or I didn’t know they were involved in whatever activity they won an award
for.”

The Jesuit Roundup‘s Editor-in-Chief Connor Thomas ’18 echoed that “the thing that stuck out to me was the wide range of guys that received awards. People with all sorts of different interests and skills were recognized for what they do best. There were art awards, academic awards, community service awards, so everyone had a shot at being recognized. It’s a great way to shine the spotlight on every corner of the Jesuit community.”

Other students, like Ethan Williams ’18, were hoping for one but “[he] didn’t expect to get 5!” He continued by explaining that he “was surprised and honored to receive the awards [he] did.” Williams explained that he “was happy that all my hard work paid off and I am looking forward to next year.”

Multiple award winner, Giovanni Rivas ’18 voiced a similar excitement and also reflection explaining that he “remember[s] clapping for the juniors as a freshman as if it was just yesterday. But now it’s us being clapped for by the freshmen and for each other.” Rivas concluded by praising the convocation and the “a beautiful feeling to see how much we’ve all grown together and to recognize many of our brothers’ achievements and qualities as we step into senior year.”

As a result of every student’s countless hours of work in a particular subject of interest, the Junior Convocation awards certain Academic Awards, Extracurricular Awards, and Book Awards. The various awards given at the event are presented in the following order, along with numerous scholarships. The awards are provided below along with the name(s) of the student(s) awarded.

Jesuit is now pleased to honor those students who, by their exceptional dedication and achievement, have merited recognition by the various academic departments of the school.

The Brother Burt Rivet, SJ Award is named for a Jesuit brother who was a gifted artist and who was instrumental in starting Jesuit College Prep’s art program. His works of art are proudly displayed in our museum collection. Brother Rivet’s skills in the realms of art and design have moved us to present an award in his honor to outstanding members of Jesuit College Prep’s yearbook staff. For dedication in their work with the yearbook, The Last Roundup, the Brother Burt Rivet, S.J. Award is presented to:

The Brother Lloyd Barry Building Bridges Award is named after a Jesuit Brother and former employee of Jesuit College Prep. Brother Barry served us faithfully during the late 60’s and early 70’s — years of growth and construction here at Jesuit — it was Brother Barry who designed the bridge on the west side of Jesuit. The bridge building project began in 2002 by the Science department as a competition between the physics students. Bridges are constructed using a maximum of 900 toothpicks and must comply with length, height, and width specifications in order to qualify for the competition. Weight was added to each of the qualifying bridges until they collapsed. The winning bridge held 150 pounds before it collapsed. We recognize the following junior for his determination in this competition:

In 2007, the Science department established the Father Jack Deeves Rube Goldberg Award, named after long-time physics instructor at Jesuit and Ursuline Father Jack Deeves. The Rube Goldberg is a capstone project for Physics 1 at Jesuit. Students are given a task that they must complete by building a complex machine with the following parameters: they must include at least three simple machines with calculations for mechanical advantage, five calculated energy transfers and at least one circuit using no more than 9 volts. The machine can only be triggered with the release of a marble and should take as close to one minute as possible to complete the task. This year’s task was to reveal, raise and wave a flag.

Each year, colleges and universities around the country honor deserving high school juniors for academic achievement, work in their community, and commitment to leadership and service which distinguishes them from their peers. At this time we wish to present the following college book awards:

The Bausch & Lomb Science Award recognizes outstanding academic achievement and superior intellectual promise in the field of science. This year’s recipient is:

The Shakespeare Award is presented to a high school junior who demonstrates a deep interest and curiosity about literature and how great literature works. He exhibits a noticeable talent in his own writing, an interest to grow in his skill as a writer, and he inspires and motivates classmates to develop a greater appreciation for literature. This award comes with a $1,000 scholarship to be applied to their senior year tuition. The Shakespeare award is presented to:

The James M. Collins Citizenship Award, including a $1,000 scholarship, was founded to honor the memory of the late Congressman James Collins and is awarded to the juniors who best exemplify those values which the Honorable Mr. Collins represented: knowledge of history and government, participation in the community, and American citizenship. This year’s recipients of the James M. Collins Citizenship Awards are:

The Counselors’ Scholarships are funded by an anonymous benefactor who wanted to honor a student who is committed to being a Man for Others, who tries his best, but may not be recognized as a top academic student. They may be involved in their church, Jesuit or their community, but they are a strong example of what Jesuit represents. The Counselors’ Scholarship, consisting of a $700 tuition grant, is awarded to:

The Frank Guida ‘02 Memorial Scholarship was established by Karen and Joe Guida and the classmates of Frank Guida to recognize a Junior student who strives for excellence and has exhibited substantial talent and promise in music, theater, or art. We are pleased today to recognize and celebrate a Junior student who has demonstrated exceptional abilities in the fine arts. The 2017 Frank Guida Memorial Scholarship in the amount of $650 is presented to:

The Bachendorf Scholarship was established by Mr. Bock to recognize a Junior student who has shown the most improvement academically. This year’s recipient of the Bachendorf $2,000 scholarship is:

A scholarship was established in 1995 in the name of Dean Oliver Clarke of the Class of ‘94. The Dean Oliver Clarke Memorial Scholarship is singular in its distinction as the only Jesuit scholarship that is without need, scholarly or extracurricular requirements. The purpose of the scholarship is to honor Dean, whose greatest gift to the community was himself. This scholarship, therefore, is based on the character of the student and his essential quality as a member of the school community — who, in words from our mission statement, “respond with a generosity beyond the ordinary and commonplace” and who has, therefore, helped “create a school community in which each individual and group receives respect and support.” This award carries a $2,000 scholarship stipend to be applied to senior year tuition. This year’s Dean Oliver Clarke Memorial Scholarship is merited by:

The Louis Kramer Memorial fund was created by Kris and Matt Kramer to honor the memory of their first born son who died at the young age of two. Jesuit education has been a hallmark of the Kramer family since 1904 at St. Louis University High School in Missouri. Community service being a core component of the profile of a Jesuit graduate, the Louis Kramer Memorial was established to recognize and celebrate a Junior student who has dedicated the second most number of service hours during their Junior year. The 2017 Luis Kramer Memorial Scholarship, in the amount of $2,500, is presented to:

In 2005, Pat Shannon established the Shannon Family Scholarship, which recognizes excellence in community service and social justice. The recipient, a Junior, is a student that has completed one year of work grant at Jesuit and who lives the example of our school’s motto of “Men for Others.” The 2017 Shannon Family Scholarship, in the amount of $2,500, is awarded to:

In 1995 a scholarship fund was established at Jesuit College Preparatory School in memory of Scott McWhorter, Jesuit class of 1993, to be given to the student who best exemplifies Scott’s desire to always put forth his best effort in academics and athletics and to demonstrate a genuine concern for all his fellow students and those less fortunate than he. The Scott McWhorter award honors a student noted for his concern for others and his commitment to Jesuit.

This scholarship is awarded to a rising Senior who best reflects the artistic talents, character, and spirit of Andrew Bark, Class of ‘98. This scholarship is unique in that it rewards a student’s passion for art above any other criteria. Andrew was a brilliant artist, and when he passed away in August 2002 from a courageous fight with cancer, his friends and family created this scholarship as a way to honor his legacy. It is my distinct privilege to award the 2017 Andrew W. Bark ‘98 Memorial Scholarship in the amount of $15,450 to:

The Henrion Award, established in 1987, is given by the Henrion family in memory of Tim, who was tragically killed in an automobile accident just days before he began his senior year at Jesuit in 1986. Tim had looked forward to participating in a wide variety of senior activities and extracurriculars. This award is a full tuition grant, plus a stipend for personal expenses, given to a student in the Jesuit work grant program, to free him from his work obligation and allow him to more fully participate in Jesuit activities and extracurriculars during his senior year. The Henrion Award recognizes a work grant student who has excelled in academics, in activities, and who has conscientiously and enthusiastically carried out his work grant responsibilities. On behalf of the entire Henrion family, I am pleased to present this year’s Henrion Award to Junior:

Jesuit’s ‘Man for Others’ award is given each year to students who exemplify, in their words and actions, what it means to be a Jesuit student. They have demonstrated in their dealings with others the ability to give of themselves selflessly. The award carries with is a $1,000 scholarship furnished by the Jesuit Women’s Auxiliary. This year’s Junior ‘Man for Others’ award is presented to:

Pedro Arrupe, Father General of the Society of Jesus, often spoke and wrote of the mission and direction of the Jesuit schools. Father Arrupe first used the phrase “Men for Others” and challenged Jesuit schools to form students into men who use their gifts in the service of others. The Pedro Arrupe award is merited by a Junior student judged by the faculty most representative of the values of a Jesuit education. He is a student committed to educational growth, the pursuit of justice, a willingness to serve, a compassion for all, and openness to the Spirit. The 2017 Pedro Arrupe award is presented to: