More
JesuitRoundup.org is brought to you by:
News Jesuit Bounces Back to Beat Choctaw
Facebook
Twitter
Email
Print 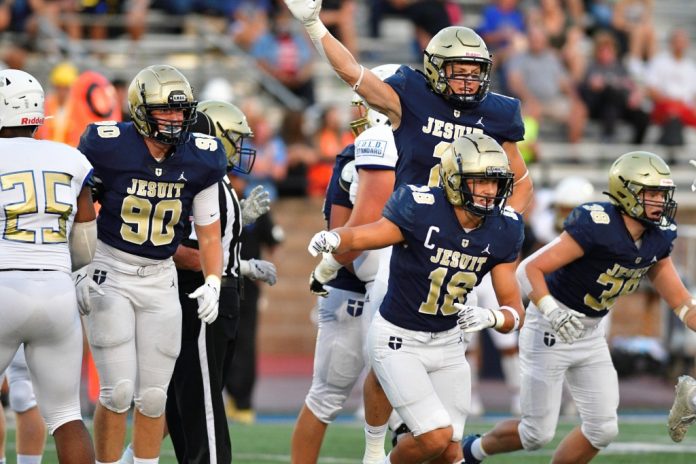 Choctaw was a state finalist for Oklahoma in last year’s season and came into the game 2-0, blowing out their first two opponents easily. They had athletes across the field with many players having D1 offers from major schools. On the other hand, the Rangers looked to bounce back from the past week’s loss to Rockwall and also gain momentum heading into district play. This was a monumental game early in the season, and it was a must-win for Jesuit to reacquire the swagger they possessed against Marcus.

The first quarter started the game with excitement and lots of scoring. Choctaw received the ball in the first half and exploded with a 64-yard touchdown on their second play. The Rangers responded with a touchdown of their own, easily running the field with the help of a beautiful 33-yard catch by Ford Butler ‘22. However, Choctaw again scored on a 3-play drive and pulled off a 2-point conversion to make it 15-7.

On the next drive, the defense stopped Choctaw on a fourth-down, shaking up the opposing quarterback in the process. After a kick return touchdown for the Yellowjackets, the defense played well for the rest of the half with no touchdowns and even caused a fumble in the second quarter.

Gage Roy ‘22 began to heat up with two touchdown passes to end the half, making the score 22-22. During the first quarter, offensive guard Luke Hoops ‘22 came down with a back injury putting him out for the rest of the game; however, Neil Lancaster ‘23 came in and filled his role admirably. Right tackle and captain Matt Craycraft ‘22 was impressed by the junior, saying, “Neil stepped in at right guard and did a good job against a tough defensive line,” – a crucial aspect of the game for the rest of the night.

The second half proved slower than the first. The Rangers pushed for game control, exploiting Choctaw’s lack of conditioning and energy. The Yellow Jackets struck in the third, but some crucial turnovers prevented them scoring for the rest of the game. Nose guard Jameson Kemp ‘23, came up with a huge interception and Austin Graham ‘22 caused a fumble with a hard hit. The offense continued to play well even with the loss of wide receiver Ford Butler ‘22, still able to score two touchdowns in the third quarter. Later, in the most important play of the game, Grant Peters ‘23 stripped the ball out on the two-yard line in the fourth-quarter allowing Jesuit’s offense to ice the game with an electric 53-yard run by captain Robert Fitzgerald ‘22.

The injury bug continues to hurt the Rangers, putting out star player Ford Butler ‘22 for the season and starter Luke Hoops ‘22 in the beginning of district play. However, one of the main strengths of this team is its depth, seen by Neil Lancaster ‘23 and Cooper Cutler ‘24 coming in and making immediate positive contributions. The defense stepped up after the first quarter, causing 4 turnovers and shifting the momentum multiple times. The offense continues to dominate with 416 total yards against Choctaw, averaging 34 PPG on the year. Overall, this is a great win for the Rangers. Returning from a loss last week, to beating a top-5 team in Oklahoma in exciting fashion. The whole team stepped up to win the game and this must be seen as a quality win. This will help the Rangers roll into their district schedule, hoping to go undefeated for the rest of the year. The team has a bye week this week, but make sure to support Jesuit in their return to the field on September 24 at JJ Pearce!