Students come to class and take a short quiz over what they learned the previous week. They quickly work to finish all the problems, and once they finish, they hand over the quizzes to their instructor. The next day, the results are in. Most students received a 3 on their quiz, standing for mastery, increasing their overall grade. However, a few received 2s, meaning proficiency, but not to fret, their grade did not decrease. Instead of worrying about their grades, this gives an incentive for improvement for the students who struggled.

This year, there has been a major change in the grading system for all of the science classes. Mrs. O’Sullivan, Jesuit’s new Assistant Principal of Academics, helped implement this new system for the school. I recently interviewed her to go over the foundations of the new system. In addition, I also interviewed Dr. Kirby, the Assistant Principal of Curriculum and Academic Support, Mr. von Schlehenried, a science teacher at Jesuit Dallas, and Dr. Gruninger, the science department chair.

For every course, there are a variety of constant standards, with varying standards across the different subjects. Throughout the year, there will be numerous checkpoints for all of the lessons, which help determine the level of proficiency of the student. After that, the student’s grade will accurately reflect his grade. Mrs. O’Sullivan stated that “one of the biggest benefits away from the grade is learning and understanding, instead of just trying to get the grade.” Dr. Gruninger stated that “this also helps to better understand where the student is at and how to then improve and learn more.”

For every individual quiz or checkpoint taken, a grade out of 4 will be given. 4 reflects advanced, 3 reflects mastery, 2 progressing, and 1 beginning. On a scale of 100, 4 equates to 100, 3 to 90, 2 to 70, and 1 to 60. Then, after there have been numerous checkpoints on a specific topic, a score can be assigned to that standard. “Other things look at individual skills or objectives, or standards, and you can see how you’re doing on each one,” said Mrs. O’Sullivan.

Dr. Kirby stated that “this system allows us to focus on making grades more accurate relates to skill development and grade development.” Unlike the previous system, where, after a quiz or test, there were few, if any, revisions possible, this system allows you to work on a skill as many times as possible and increase your grade up to a 100. Dr. Gruninger stated, “that this system helps increase that learning instead of punishing the student for not understanding the material for the first time.”

Furthermore, this not only reduces the stress during a test but also helps students focus more on a thorough understanding of the topic rather than solely on the grade. After numerous checkpoints, a “grade is calculated. Sometimes that grade is the most recent,” or somewhat similar to the mode of the checkpoints. This was a decision made by the entire science department, as Dr. Kirby said that they used “several articles and books” collaborating together to implement an instrumental system in changing the way students learn science.

When asked about the research and development of the idea, all three talked about “a well know researched name Robert Marzano”, a researcher in relation to education. He has done research on standard-based assessments and creating more successful teaching strategies. Dr. Kirby revealed that they continuously work with him, such as by having meetings, to assess how the system is affecting learning. Dr. Gruninger stated “they spent the last three years focusing on how to provide a better science curriculum, and even before the pandemic, we were thinking of implementing it this year.”

Mr. Von also stated that as the teaching system is being used, “evidence is gathered, and usually takes up to three years to see a change,” and during this time, patterns and differences in how well the students learn the material can be garnered.

I interviewed Saikrishna Gujjarlapudi ’23 about his thoughts on the grading system. He said that “The grading system also makes it so that teachers’ grades are easier to see and you can track your progress and concentrate on what’s more difficult. [Also], most assignments can be revised which is a benefit, which gives more merit to effort rather than accuracy.”

James McKinney ’23 stated that “the new system allows you to focus more on learning the material rather than just worrying about the grade.”

I think that this new grading system will be very beneficial for the school. This system allows students to not worry about a single test bringing their grade down. Instead, they can focus on working hard and learning the material.

Stay Tuned to The Roundup for more academic news! 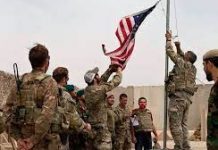 Afghanistan: The End of A Twenty Year War