More
JesuitRoundup.org is brought to you by:
Clubs & Activities Medical Society STARS – the Future of Science
Facebook
Twitter
Email
Print 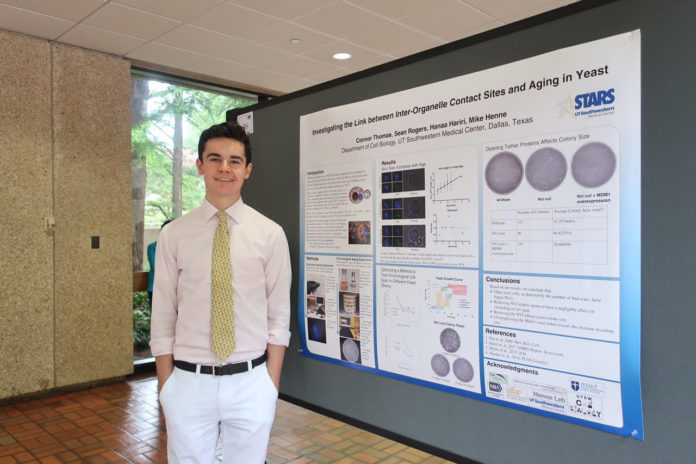 It might sound crazy, but that’s just what rising seniors Peter Hundley, Jackson Petroll, Connor Thomas, and Nicholas Wilson did over the summer. UT Southwestern’s STARS program brought over 50 metroplex high schoolers together for an eight week paid research program.

“Rising Seniors apply to the program during their Junior year,” began Mrs. Boyle. “The STARS program facilitators encourage the students to have a genuine interest in fields that relate to medical/health science.  Since the program is research driven, the students should also show interest in exploring this area of medicine/health science.  Once selected, the STARS facilitators do a phenomenal job at placing students in areas of research that are of interest to the STARS student.”

“The application process is very involved with having the students write essays that relate to their interests in the medical/health science field [and] also ask about their personality and character,” continued Boyle. “A series of interviews are conducted before the final selection process is completed.  The application process can be intense at times (interviews) but it is really important that the STARS program facilitators get to know the students, their personalities and interests before they select students for their prestigious program.”

Through this rigorous applications process, 3 of the 12 Jesuit students were selected for the program (one applied outside of Jesuit).

Each student was then assigned a lab, a principal investigator, and a mentor (both often having PHDs) based on stated interests.

Nicholas Wilson ‘18 helped grad student Zhengyang Zhou perform a genome wide association study by running a number of statistical tests. “I learned how to code in R (which is a programming language like S or python) before I began my internship,” began Wilson. “I was very comfortable with the language by the time I got in. At one point I binged watched a 3 hour youtube series on linear algebra so I could understand eigenvectors and eigenvalues for principal component analysis. I actually really enjoyed the series since it focused on learning the intuitions behind different ideas in linear algebra instead of mindlessly teaching how to do operations.”

The other students didn’t have to do as much preparation. Peter Hundley ‘18 commented “I was not assigned any prior reading, but I know that some of my peers had some work to do beforehand.  It all depends on the principle investigator.  The first week in the lab was pretty intense, and I kinda wished that I had been given something to at least look at.  You are thrown into a lab with people who already have their PhD and they don’t like to slow down for you. You really have to take in a lot of information and be able to process it quickly,” he explained.  “This might have been one of the more stressful parts because my mentor and PI would casually print off “light” readings that I should go over but they were usually 30 – 80 pages long (and they were scholarly articles in a very specific field so I had to google a couple words every sentence, and sometimes google didn’t even have the answers!)”

STARS was more than just crunching numbers and graduate level readings, however. “STARS also set up some social activities for all the high schoolers,” began Connor Thomas ‘18. “To kick off the summer, we had a team-building day at Group Dynamix. Later, we all went to Pinstack for some games and bowling. There were also some miscellaneous events around campus at UT Southwestern that we were offered.”

These connections have lasted long after the program ended. “The STARS group has a really active groupme text and a Snapchat group named ‘Summer Research Cult :),’ where we complain about college apps and attempt to plan social events. Right now a lot of them want to know when I play volleyball so they can come to a game and watch, and we’ve also been to someone else’s tennis games. I actually was at Starbucks recently with Jackson and two of the STARS people from Hockaday. We’re also currently trying to plan a trip to the state fair or just something we can all get together for.”

The program has resulted not only in flourishing friendships, but also has provided the students with great connections to people in the scientific field. Hundley’s principle investigator wrote him a letter of recommendation, and these connections will become even more advantageous as each student advances in his STEM career.

On Wednesday September 27, the four students presented their findings in Hughes Hall.

Hundley presented on his study of lipid droplets in yeast.

Thomas presented on his study of aging in yeast.

Wilson presented on his analysis of genetic data.

“I think the students did a phenomenal job at presenting their research,” remarked Boyle. “Having the students get up in front of their peers and STARS colleagues sounds pretty intimidating but they did such an amazing job at explaining all of the work that they did over the course of 8-weeks.  I am so proud of each of them!”

“I think the presentations were awesome,” agreed Mr. Von. “The guys blow me away by how comfortable they appear with the material and how effortlessly they explain such advanced concepts.”

“I love that the guys get a real glimpse into true scientific research and see that they can be a part of it,” Von continued. “Knowing you can do it is 75% of success. I think these guys realize how powerful their brains and minds actually are.”

The program only lasted two months, but its impact will last forever. “It’s definitely given me a lot to think about. I think that no matter my major in college, I want to get involved in some form of research. There is something to be said for exploring things that no one has ever explored before. No one had ever looked if the NVJ got bigger as yeast cells got older before me, and that’s pretty exciting,” said Thomas.

If you are currently a junior, applications for the STARS program are opening soon! Contact Mrs. Boyle, Mrs. Sanchez, or Mr. Von if you are interested! “Go for it and apply!” exclaimed Boyle. “You never know, if selected, if this experience could open up new opportunities for you and your future.  Maybe this experience might peak your interest in research or might help you realize that you have a new love for a field that you never really considered (like Nicholas Wilson did this year).  The other side is it might also help you realize that research might have been your passion prior to the program but once completing STARS, it helped you consider and evaluate other opportunities.  But it is good to figure out those experiences at a young age like STARS is giving our students the opportunity of doing.  We have always had students that attend STARS say that it was an opportunity that they were thrilled to be a part of and such a meaningful experience.  So apply—it just might change your life!”