More
JesuitRoundup.org is brought to you by:
Joan A Degen    Suzanne and Clark Durham    Carl & Theresa Motter
Science Marine Biology Under the Sea with a Fourth Year of Marine Biology
Facebook
Twitter
Email
Print 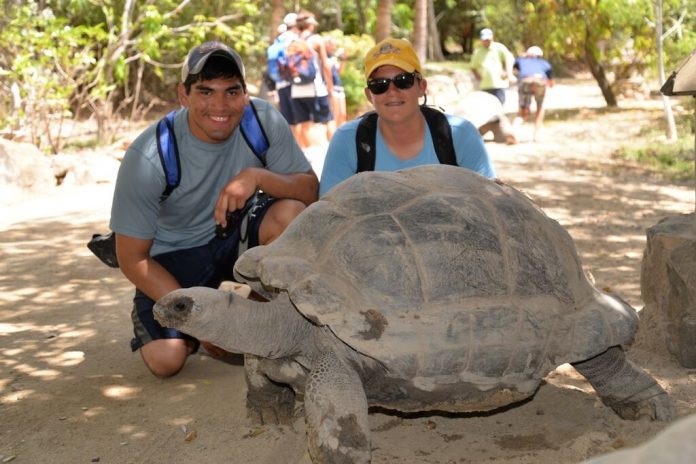 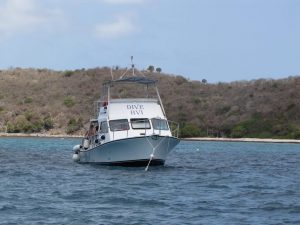 One of Jesuit’s best hands on summer courses is the Marine Biology program run by Assistant Principal of Academics Mr. Ben Kirby and biology teacher Dr. Todd Gruninger. The course consists of two weeks in June dedicated to the classroom conducting experiments, learning the ins and outs of marine life, and then taking a week long trip to the magnificent British Islands. While in the BVI’s, Jesuit works with Dive BVI, run by fellow texans Casey and Jeff McNutt. I have been blessed to be able to take both Marine Biology 1 & 2 over the past two summers, and I wish I could take it again next summer. My journey this past summer began on July 23, meeting at DFW early in the morning for the long day of travel to the islands.

The first day in the British Virgin Islands started out by eating breakfast at our hotel, Guavaberry Resort, then heading straight to the harbor to load up on the boats. 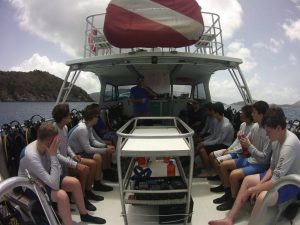 After running through the safety procedures on the Sea Dragon, we headed out to George Dog Island for a quick dive and snorkel. While everyone was diving, Doc and I took to the surface to explore the reef. While snorkeling, I noticed little strings of white membrane in the water, and I found out they were jellyfish eggs due to stinging sensations my body felt. Next, we went to an area called Coral Gardens. Snorkeling at Coral Gardens was one of the best snorkels I’ve done because I saw so many different fish including barracuda, blue tang, and angelfish. We then headed back to the harbor for lunch to refuel for our visit to the Baths this afternoon. I learned that the Baths are called the Baths because of the batholific plates that formed it. The tour through the Baths led out to the beach where we snorkeled back to Guavaberry. After returning we quickly showered, then headed down to the Wi-Fi room to present our team projects to our Dive BVI team leader. 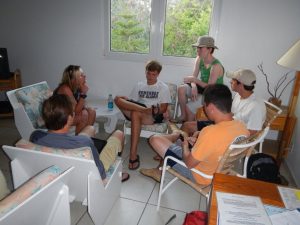 After we presented our projects to our team leaders, we went down the beach for a delicious dinner overlooking the sunset.

On day two of our trip, we had an amazing day of diving/snorkeling and playing the beach games. Our first dive site was at Ginger Steps, where the current travels through the reef creating a sand channel that attracts several pelagic fish such as sharks and eagle rays. As soon as I jumped in the water and looked down I spotted a Caribbean reef shark, and it was awesome. 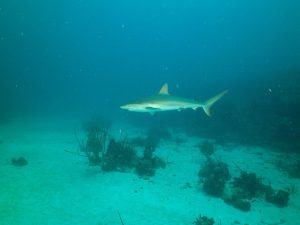 I can now say that I’ve swam with sharks, even though they were only 3-4 feet long. On my snorkel, I also saw a massive hogfish lurking on the ocean floor. Next, we moved to the other side of Ginger Island called ginger backside. At ginger backside, I snorkeled along the shore exploring the reef and I encountered a huge silver barracuda that flashed it’s razor sharp teeth at me. After this we headed back to Guavaberry for lunch on the beach, but more importantly the beach games. The beach games were a series of competitions between the cabins. My cabin, Jasmine, took home the ‘ship winning three of four events which included water balloon dodgeball, blind swimming, sand pictionary, and a relay race. 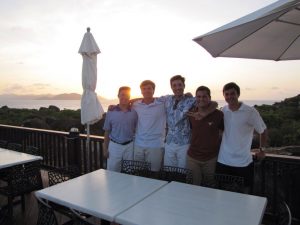 After a day in the sun, we cleaned up, went to Mass, and enjoyed a delicious meal at the Top of the Baths restaurant.

On day three of our trip, we explored the wreck site of a luxury ship from the 1860’s called the Rhone. The Rhone sank in October of 1867 due to a massive hurricane that ran the Rhone into land. The steam engine room was the first part of the ship to make contact causing an explosion that divided the ship in half. While snorkeling over the Rhone, I was able to see one of the huge propellers and the marine life that calls the Rhone their home. 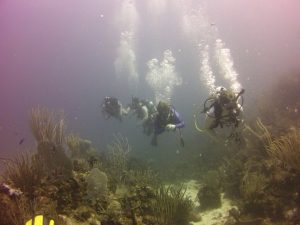 Next, we went to Cooper Island to enjoy the legendary fish and chips for lunch. We then returned to Guavaberry for dinner on the beach, and a night snorkel. During the night snorkel my group worked on our project, which was the study of if the bioluminescence of plankton is affected by the temperature of water. We had some difficulty catching the plankton, but finally caught some and found out that in colder water, it takes longer for the plankton to illuminate.

On day four of our trip, Marine 2 was treated to a visit of Richard Branson’s Necker Island. The island is a wildlife preserve and private resort consisting of different species of lemurs, tortoises, flamingos, and parrots. I had never seen lemurs, besides in the movie Madagascar, but they were so interesting and friendly. On our tour of the island we also encountered huge 600 lb. tortoises that looked prehistoric. The island also had two tennis courts, because one is simply not enough. After our visit to Necker island, we headed to Saba Rock for lunch, where I had the best fish tacos…ever. Saba Rock restaurant and Resort was started by the man who was in charge of collecting the artifacts from the Rhone, and in the gift shop they had several of the artifacts on display.

On the fifth day of our trip, we helped maintain Jesuit’s coral nursery by cleaning the coral and the PVC pipe trees that hold the coral. Diseased staghorn coral has bleached white tips that will eventually spread down the coral. Once we finished cleaning the coral, we headed to a dive site called the Chimney because of a rock formation that resembles a chimney. 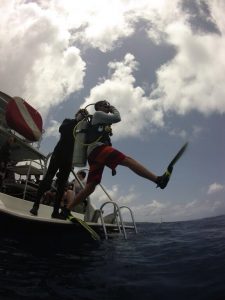 Next, we headed to Savannah Bay to meet up with the Sea Monkey for sandwiches on the boat, and a tour of a salt pond that was unfortunately dry due to a drought on the island. We headed back to Guavaberry early after this to prepare our presentations for the Dive BVI staff and Doc. After everyone had presented we headed down to the beach for pizza overlooking the water and sunset, which beats delivery every time.

Our last day in BVI was a calm and relaxing one, compared to the days before. For starters we were allowed to wake up at nine after having to wake up at seven everyday. At nine, we had a quick breakfast of donuts and granola bars, and then headed to the harbor where we cleaned the wreckage of a boat that broke loose from a mooring during a storm a few weeks ago. We also cleaned the rock line of the harbor where we found trash ranging from used diapers to all kinds of bottles and plastic products. 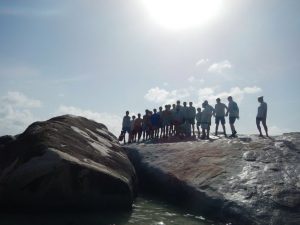 After our service, we enjoyed lunch at the harbor and then headed back to Guavaberry for a free afternoon of frisbee on the beach. After soaking up the sun, we got cleaned up and headed to Mermaids Dockside Restaurant for a delicious buffet. This being the last night of the trip, Casey of Dive BVI made a video montage that captured all the moments of the trip that was a good reminder of all the good times everyone had on the trip. Finally, we said our thanks and goodbyes to the staff for the fantastic week we had.

I highly recommend the Marine Biology summer course to all underclassmen because it’s an experience like no other. Casey and the rest of the Dive BVI staff are the best, and truly make the trip something special. I will miss taking Marine Biology this upcoming summer, but I’m so thankful for my experiences on the trips. 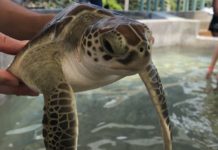 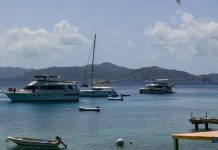 Down in the British Virgin Islands