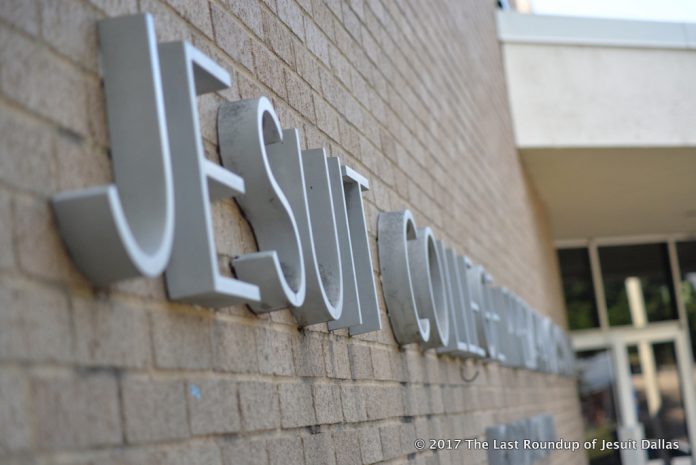 Packs of 8th graders swarm through the halls, ambassadors hurry around campus, showing off the cafeteria or weight room to prospective families.  Buckle up, hold on to your hat, (insert another cringy cliché); it’s admissions season.

With the current Students for Fair Admission vs. Harvard legal controversy, the college admissions process is under scrutiny in the nation’s courts.  While college admissions are on the minds of most seniors (at least I hope so), many Jesuit students forget about the madness of ISEE tests, interviews, and tours in 8th grade.

The Roundup sat down with Mr. Tim Host, Director of Admission for Jesuit.

The Roundup Exclusive: Inside Jesuit Admissions

How does Jesuit evaluate candidates?

It’s a very holistic approach.  There’s not really a single component that’s automatically going to eliminate a kid. We look at their 7th and 8th grade transcripts, ISEE test scores, interviews, recommendations, and responses to questions.
Beyond that, we also have considerations as a Catholic school to admit Catholic and non-catholic students to represent all of Dallas, not just this neighborhood. We want a geographic, socioeconomic, and ethnically diverse class that represents the whole city.
Also, legacy status plays a role, but it’s not an automatic acceptance.
We look at all of these things trying to determine which kids are going to be most successful here.

Jesuit admissions is not a science, it’s an art.

Tell me about the process of reading an application?

We read every single application as a group. The admissions committee is made of 9 mostly administrative members, freshman counselors, and Miss Carter from diversity and inclusion. Then, I divide up the applications and assign them to each person.
I’ll assign 10 to each person, and they make recommendations to admit, wait list or deny a student. Then we go through and we will present each student to the full committee and the person will make their recommendation and if someone has a discussion, then we’ll discuss it. If not, then there whatever decision the Committee Member suggest is what we go with. If we have people in disagreement we will do a majority vote.

Could you talk about the formula Jesuit uses to help the admission decision process?

The formula is a starting point for us, but by no means does having the highest points get you in automatically.

Grades, test scores, recommendations, and the interview are awarded points to help us determine is this is a person who had most of the things that we’re looking for.
But a kid who has great promise, who maybe doesn’t have as many points–we’re still going to look at that. It’s a starting point, the admission process is painstaking in reviewing every single person.

What kinds of students are discussed the most in the admission committees?

These are often great students who don’t look as good on paper.  Maybe they have a C or maybe their ISEE scores are lower, but then we find a unique personal story that they have.  It could be a family tragedy, personal illness, or something similar. They’ve overcome an obstacle, so while they may not be the strongest academic student, they have a story that will contribute to our full community.

What percentage of the incoming class is Catholic?

Jesuit typically has between 75 and 80 percent Catholic students in each class.

Does Jesuit try to admit a steady percentage of non-Catholic students?

It’s important for us to have non-Catholic students as part of the mission; if not we would be taking away that very rich aspect of the world.

So we love to have non-Catholic students be a part of Jesuit because they educate us; the people who are not Catholic are part of the total education here.

How does Jesuit try to promote diversity in admissions?

Miss Carter has done a number of things with Outreach to promote a diverse applicant pool. There are some boys programs close by that she reached out to that are primarily African-American students to introduce them to Jesuit.

For instance, I went to a high school Fair in South Dallas to attract more diverse candidates from the area.

What percentage of admitted students have legacy status?

It’s been a steady 30% of the class, but as classes get bigger, we may see a little increase.  However, we are now a little stricter with the kids who are legacy who get in; most of the kids who get in who are legacy would get in without that extra boost.
There are a handful of students who do benefit from legacy status.  They might not be as strong as others, but as long as we think they can be successful, we will look at them.

Are there a lot of instances where Legacy kids are the ones being talked about in committee meetings?

Yes.  Maybe don’t have the highest point score, but they may be good kids who just don’t have a strong record.
However, keeping the family together is very important to us, and is part of the reason why we initiated the summer school conditional program to could give those kids a chance.  These kids are often from underserved schools who maybe don’t have the background but have potential or legacy students who we think can contribute but aren’t as strong.
That’s why we give them the opportunity to go to summer school, and if they’re successful in that and we know they’re going to be okay–they’re not going to be valedictorian–but they’re going to be a contributing member to our community.  Usually, about 25 kids are admitted through our conditional summer school program.

What does the admission office do between January 26th (applications due) and April 26th (admissions decisions released)?

After January 26th, the admissions committee will meet six or seven times.  We spend the first few weeks contacting families and schools trying to get applications complete.  Then, we spend a lot of time reading because it takes 20-30 minutes for a single application and there are 525 applications.

Is there any specific part of the application that holds the most weight?

The forefront of an accepted application is grades and recommendations. That’s a student’s demonstrated work and behavior.

What makes a really good recommendation?

We are looking for mostly motivation and like cooperation.  It’s funny because the teachers want to see their kids succeed, you know, so you have to read between the lines sometimes.

If you have motivation and cooperation, even if you’re a B-C student you can be successful here with the help of our teachers.  Good teacher recommendations often state that the student has good behavior, good attendance, good study habits, and determination.

Are there different points awarded to different geographic regions or different racial backgrounds?

No, we don’t. When forming the class, we’ll check out our racial breakdown.  For instance, if we don’t have very many African-American kids yet, then we’ll look at our highest African American applicants to see if they can be successful here.
We’ll also check for school diversity. It’s not a quota or anything, but it’s just measured.

Which Applications do you read first?

How many students receive a Jesuit admissions letter (now an online update)?
We send about 300-310 acceptances in April.  Our goal was a class of 295 this year.  We typically will have 40 to 50 who decline, so once we start getting declines then we start considering the wait list.
The waitlist is not ranked or anything. We just go book back and say, “okay, which kids do we really really want?” It might not be the top academic, but maybe someone awesome that we’ve missed.

How many students are usually admitted from the waitlist?

About 20 students per year.

How do parents react when their kid is not admitted?

Most people who are denied are polite about it. If they see me, they just want to know what it was if their son applies next year and what could he do better. It’s just sort of closure for them.
There are also a few who get really, really nasty.
In fact, there was one year I had to end a conversation. I just stood up and said, “I’m sorry, you’re going to have to leave” because the man was screaming at me. You just don’t say that, and his son was there with him, just witnessing his father’s horribleness.
I’ve also gotten a couple bribes, which is kind of funny.  A couple of moms have flirted with me a little bit.  For the most part, people are good people, but it is the anger that is frustrating.

If you are reading this article as a prospective student, good luck!  Make sure to give your best effort in the classroom, ask teachers who know you well to write recommendations, and think about how to answer the essay questions.  Hopefully, you will end up here at the 38.4 (and write for The Roundup)!

Stay tuned to The Roundup for the latest Jesuit news!