More
JesuitRoundup.org is brought to you by:
Home Sports Baseball Murrah’s No Hitter Caps Off Varsity Baseball’s March Opening 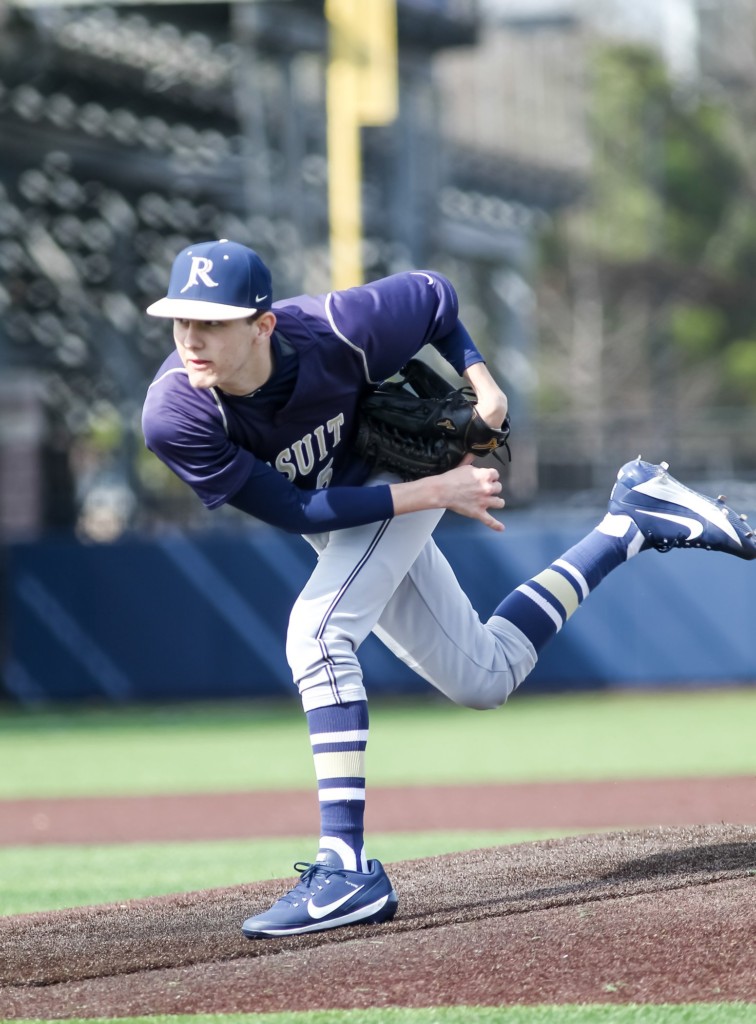 Facing six formidable opponents in three days, the Rangers were prepared to be tested both physically and mentally.

As Jesuit Baseball prepared for their first game of March, freshman pitcher Gavin Perryman got the nod from Coach Gavin. As the catcher placed the signal between his legs, Perryman intricately placed his fingers around the laces of the baseball. Rocking his body, he wound up, throwing his leg out and down toward home plate. If there even was a batter in the box, he didn’t see the fastball coming.

This seemed to be the story for Jesuit as the undefeated Rangers faced off against a highly talented Forney (0-0). In his first ever varsity baseball game, the promising young athlete notched five strikeouts. However, the Rangers’ offense provided just as much noise with Junior Garrett Reuben going yard over right center field in the sixth inning solidifying a 5-2 win over Forney.

As the sun began to set over Wright Field only four hours after their first game, the Rangers took the field again. Facing an incredible offense in Plano West (3-0), the Rangers went with ace pitcher Jack Lynch. Methodically picking and placing pitches, Lynch held the Wolves to three runs in six innings only to be relieved by Junior Ben Shepherd in the final inning. However, in order to win games, runs needed to be scored, and the Rangers bats seemed to stay cold all night. Notching thirteen total strikeouts, the Rangers dropped the second game of the day with a 6-1 loss.

After an evening out on the first day, the Rangers were prepared to take on Xavier College Preparatory, a Jesuit school from California. Senior Cole Beach took the mound, putting up an impressive eight strikeouts and only one run in six innings.

Late in the fourth inning, sophomore Jalon Mack let one fly into left center for a triple, scoring senior Tyler Murrah. The Rangers combined for seven hits and six RBIs in twenty three at-bats, gaining the edge over Xavier in a hefty 6-1 victory. When asked about the opportunity to play other Jesuit schools, Cole Beach said, “I always enjoy playing other Jesuit schools. It’s always interesting to share our experiences with one another.”

Following a hearty win over Xavier College Prep, the Rangers looked ahead to the next game.

Coach Gavin gave the nod to varsity veteran and senior Peter Delkus. Delkus pitched the entire game, allowing only three hits and earning six strikeouts in the Rangers’ dominant performance. Still hot from the previous game, Jalon Mack continued the streak by putting up another triple, scoring senior Luke Przybylski before an infield error allowed himself to score. With Delkus and the defense holding back Lovejoy, Jesuit’s bats erupted, scoring another eight in the next six innings. With a final of 10-0, the Rangers felt comfortable going into the second game of the day. Luke Przybylski noted that “after a solid win, the team felt eager and excited for the next two games, especially for the game against BL.”

As the Rangers took the field for the beginning of the third double header in three days, the team sought to carry their win streak through another day.

Sherman (0-1) quickly scored in the top of the first, but the Rangers struck back with two runs of their own. Senior Chris Irby picked up the pace, blanking the Sherman batters from the second through the fifth innings.

The Rangers notched a pair of runs again in the third and fifth innings, extending the Rangers lead to four as the final innings approached.

Irby was relieved by Junior Whitt Chambers, who struck out one in the sixth and shut out Sherman in the final inning, solidifying a 6-2 win.

Preparing for their sixth and final game in the Rangers extended home stay, fatigue should have plagued the roster. Yet, the baseball team seemed as poised and ready as ever.

The Rangers couldn’t seem to miss the ball against the Friars, batting eight for twenty-three and scoring ten runs with seven RBIs, an impressive showing that could only be overshadowed by senior Tyler Murrah’s spectacular pitching performance.

Murrah struck out six of the sixteen batters he faced, allowing zero runs and zero hits. However, his perfect game was snubbed by an error committed by short stop Luke Przybylski.

Luke elaborated on his efforts, explaining, “It was a solid hit. I played it the best I could and I’m glad it was ruled an error instead of a hit.”

Keeping a short memory, Pryzybylski’s efforts came with an RBI and another play to keep the no hitter alive. Moreover, Jalon Mack, and Garrett Reuben both notched two RBIs in the Rangers’ final and most dominant win of the six game stretch, cementing a final 10-0 run rule over the Bishop Lynch Friars.