More
JesuitRoundup.org is brought to you by:
Home Featured Making America Great Again: Trump’s First State of the Union 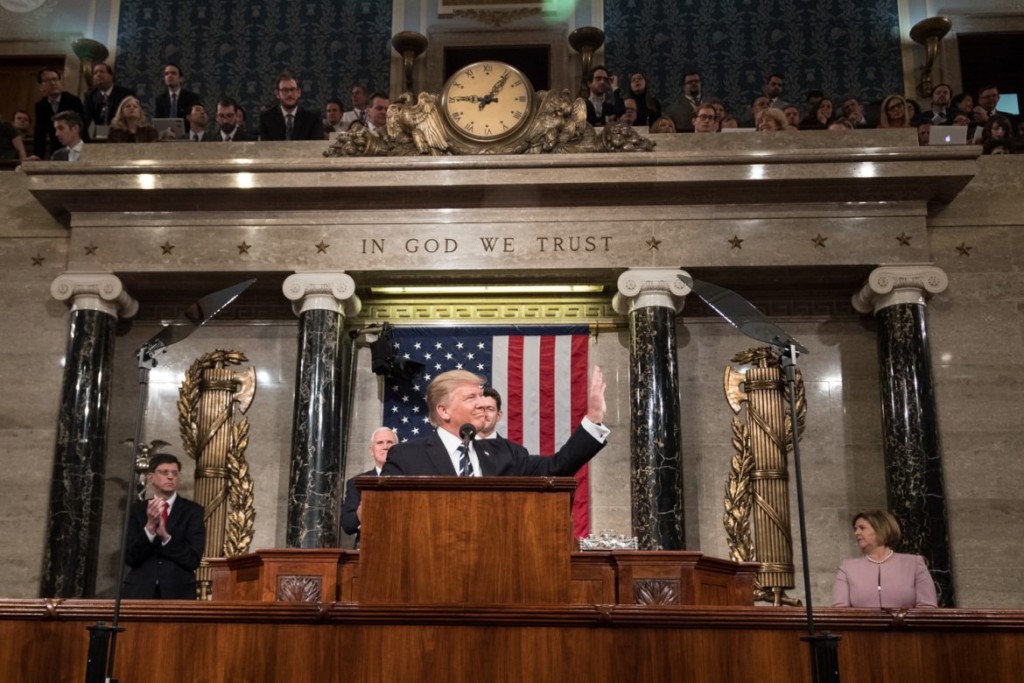 “Each day since, we have gone forward with a clear vision and a righteous mission — to make America great again for all Americans,” the President booms across the Chamber of Commerce. “Over the last year, we have made incredible progress and achieved extraordinary success. We have faced challenges we expected, and others we could never have imagined. We have shared in the heights of victory and the pains of hardship. We endured floods and fires and storms. But through it all, we have seen the beauty of America’s soul, and the steel in America’s spine.” 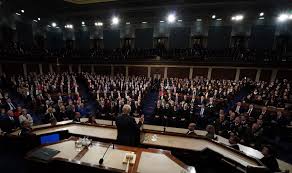 This was the beginning of Trump’s first State of the Union address. Throughout the nearly hour and a half address, President Trump stuck with the central theme of the night: Unity.

Reminiscent of Ronald Reagan’s speeches in the 80s, Trump undeniably put on a show. Highlighting snapshots of events throughout the first year of his presidency, from Hurricane Harvey and the “Cajun Navy,” to the Las Vegas shooting, to California wildfires, to the shooting at the Congressional baseball game, the President addressed the issues that brought the nation together.

What made this speech truly special was the use of guests that were in the audience. Coast Guard Petty Officer Ashlee Leppert and firefighter David Dahlberg were honored for their outstanding public service during two natural disasters, and the death of Otto Zarmbier was an example of how evil exists in the world. The Staub family, who own a small business, was used to voice how the tax cuts will help their business grow and Preston Sharp to show how the nation’s youth honors our veterans.

Donald Trump also introduced Homeland Security Investigations Special Agent Celestino Martinez (he goes by CJ) to the Chamber in order to demonstrate how ICE and border patrol agents keep our border and our country safe. Also, CJ and his story served as a visual to the audience of how Trump plans to improve border security and halt illegal immigration by adding more leaders like CJ to border patrol and ICE.

Ji Seong-ho’s story of how he escaped from the tyrannical North Korean government was an example of why the United States cannot simply ignore the communist regime. 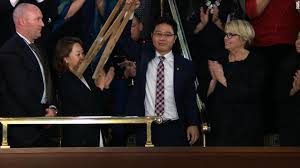 Evelyn Rodriguez, Freddy Cuevas, Elizabeth Alvarado, and Robert Mickens provided heartwrenching evidence that reminded us of the dangers of some illegal immigrants, specifically unaccompanied alien minors who ended up at their daughter’s high school and brutally killed the girls who were walking home from school together. As Trump explained, “these glaring loopholes” in our nation’s immigration system need to be fixed so “this cannot ever happen again.”

These anecdotes set the stage for Trump’s four pillar plan to solve immigration. The first pillar of the President’s “down the middle compromise” grants full citizenship to 1.8 million undocumented immigrants, the second pillar builds a wall and hires more border agents (like CJ), the third pillar ends the visa lottery and the fourth ends chain migration.

“So tonight, I am extending an open hand to work with members of both parties — Democrats and Republicans — to protect our citizens of every background, color, religion, and creed. My duty and the sacred duty of every elected official in this chamber is to defend Americans — to protect their safety, their families, their communities, and their right to the American Dream. Because Americans are dreamers too.”

The President spoke of Steve Scalise who was shot during a congressional baseball game. Trump emphasized that during that incident “we came together, not as Republicans or Democrats, but as representatives of the people,” but “it is not enough to come together only in times of tragedy.”

Unity being the central theme of Trump’s speech, he continued by “call[ing] upon all of us to set aside our differences, to seek out common ground, and to 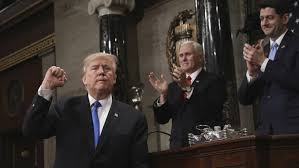 summon the unity we need to deliver for the people we were elected to serve.”

President Trump listed the economic boom over the last year with “2.4 million new jobs, including 200,000 new jobs in manufacturing alone.” Trump hit on the numbers for the workforce, with unemployment claims at a 45-year low, rising wages, black and Hispanic unemployment at the lowest rates ever recorded, small business confidence, record-breaking stock market closings, all of which are great news for Americans. 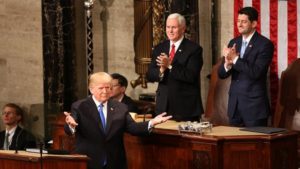 The president also highlighted one of his greatest economic successes and campaign promises: the enactment of the largest tax cuts in American history. Such reforms will provide relief for the middle class and small businesses, as well as employees of bigger companies, many of which have already vocalized that they are giving out bonuses and raises as a result of the tax cut.

“This April will be the last time you ever file under the old broken system — and millions of Americans will have more take-home pay starting next month.”

The President also emphasized the (few) steps he and Congress made in repealing Obamacare, the largest success being the removal of the individual mandate.

But nothing got the crowd to their feet like Trump’s resounding calls for unity and bipartisanship:

“The United States is a compassionate nation. We are proud that we do more than any other country to help the needy, the struggling, and the underprivileged all over the world. But as President of the United States, my highest loyalty, my greatest compassion, and my constant concern are for America’s children, America’s struggling workers, and America’s forgotten communities. I want our youth to grow up to achieve great things. I want our poor to have their chance to rise.”

Making good on yet another campaign promise, the President touched on how “the era of economic surrender is over, America has also finally turned the page on decades of unfair trade deals that sacrificed our prosperity and shipped away our companies, our jobs, and our Nation’s wealth.”

This stance on the trade deals like NAFTA and TPP have bled the nation dry, a reversal of which seeking reciprocality fits nicely with his “America First” policy. Trump promises “to fix bad trade deals and negotiate new ones.”

“We can lift our citizens from welfare to work, from dependence to independence, and from poverty to prosperity.”

Further on his “America First” promise, the President announced that through these “strong enforcement of our trade rules, we will protect American workers and American intellectual property.”

Lastly, Trump promised to maintain a “big stick” philosophy by having a strong military, “to end the dangerous defense sequester and fully fund our great military,” and “as part of our defense, modernize and rebuild our nuclear arsenal…to deter any acts of aggression.”

“Around the world, we face rogue regimes, terrorist groups, and rivals like China and Russia that challenge our interests, our economy, and our values. In confronting these dangers, we know that weakness is the surest path to conflict, and unmatched power is the surest means of our defense.”

He concluded this part of the speech by noting that “perhaps someday in the future, there will be a magical moment when the countries of the world will get together to eliminate their nuclear weapons. Unfortunately, we are not there yet.”

“Americans fill the world with art and music. They push the bounds of science and discovery. And they forever remind us of what we should never forget: The people dreamed this country. The people built this country. And it is the people who are making America great again.”