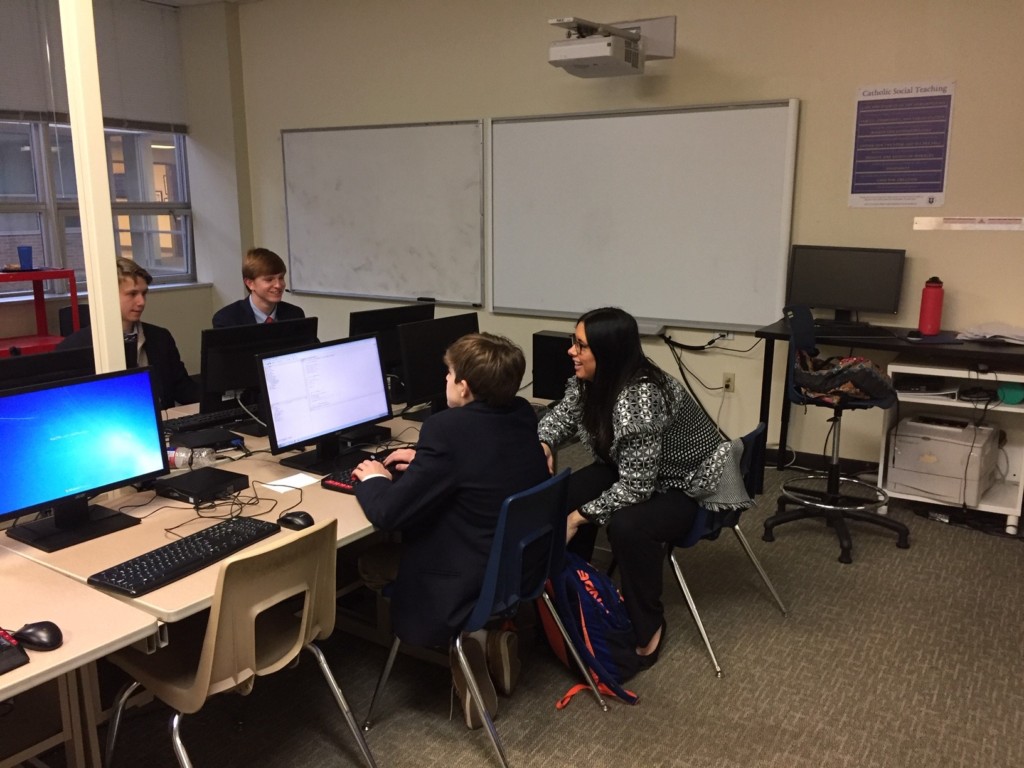 For many of the Jesuit students interested in computer science, a career in the industry is a very real possibility. Unfortunately, due to the complex and often confidential nature of these jobs, much of our understanding of them is skewed. Some of the most critical areas in computer science are the most unknown and misunderstood. These careers are cool and worth learning about, so I interviewed Mrs. Bruce, who has had an interesting career up to Jesuit, specifically in regulating virtual commerce.

Tell us a little about yourself.

I grew up overseas, my dad worked in a coal business, moved to the states when I went to college. I moved to A&M, I got a business degree in programming, which is a weird track to go on. And then I moved to Austin during the late 90s, it was during the dot-com era, so there’s a lot of programming opportunities. I worked at UT, and I worked at a broker-dealer, writing software, good stuff.

Tell us about your career in computer science before Jesuit.

I started off in IT, because I wasn’t sure what I wanted to code, but then when I went to UT they needed apps written… so I started coding for them, writing different programs, one of them being the [digital] medical apps, or putting the application online. Also, during legislation, I wrote a system that would take all the bills that were up to be voted on. I took all that and sorted out anything out there that affected UT in any way. I would take all those bills and filter out based on key words, or people would look at it and figure out if it affected UT… it was as random as, [for example] if they were going to rezone something in Galveston, then it had to make sure that that didn’t affect the medical school. It was like a search engine.

Now it would be a non-event, it would be so easy, but back then they didn’t have any software for it… That was 1997. There was an internet, but usually what you’d get from it were straight up viruses. And, whenever we did a webpage, I’d have to hand-check it against all the browsers. Now, you throw the code in and [the compiler] goes through and makes sure it works with all the browsers, and it tells you the errors on all the browsers.

And then I went to a place called Texas Guaranteed Student Loans for about six months. They gave loans out and it was just really boring, and it did not intrigue me. But the great thing was, because I was a programmer, I had a lot of freedom in that job, I could telecommute (I thought that’d be awesome) but I was by myself, and that was boring. I think programmers think that they’re solitary people, but they’re not.

So then I went to a big company, a broker dealer, that had a lot of programmers, and I wrote software called a blotter. It would take daily trades and flag them to see if they were legal or not. It was fun creating. I worked with a graphics guy, and I worked with clients– we just came up with a really user-friendly, colorful tool, because no one wants to put their trades in, they just wanted to have them processed, but for clients, you gotta save the clients.

Why did you choose to study computer science?

I realized that computer science lets you be a creative person without being a math and science person. It helps, for sure, but programming is so much more.

The nerds are great, and I worked with many of them, but it also helps when you’re creating software to create it for the end-user (consumer) and I’m more of a programmer for the end user.

Why is it important for Jesuit boys to learn programming?

I think it’s important for Jesuit students to learn programming because it teaches them different ways to problem solve, it helps them with their patience, and they’ll became very good at typing.

But more so, they’re able to learn a new language with absolutely no experience and make awesome programs. It’s empowering, and it’s satisfying to be able to make something happen on the screen based on their own programming that they might not have been able to do otherwise… it opens up their perspective to technology.

What was the coolest problem that you solved in your career?

Well, we were calculating trades, we were calculating some totals, and it was in the millions of dollars, but it was off by about $20,000… I went and started looking at the rules, because the code is taking money out, putting money in, and there had been a change in an SEC rule (federal law) that we hadn’t changed in our program, it was only three weeks old.

Many thanks to Mrs. Bruce for taking the time to share her experience with us! Email me at 19046@jcpstudents.org if you have any questions or suggestions for next time. Stay tuned for the next article in my computer science column.