More
JesuitRoundup.org is brought to you by:
Home Clubs & Activities JCL Latin Club Crosses the Rubicon with State Certamen 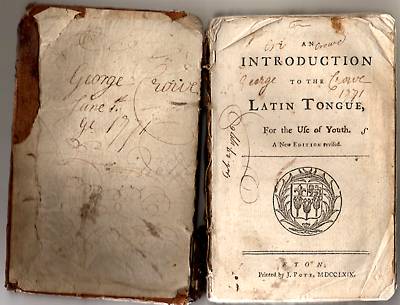 In schools across the country, budget cuts and the march of time have pushed the Latin language out of curriculums. Even in schools with classic language programs, students shy away from studying Latin in favor of Spanish, French, Mandarin, et al.

But despite, or perhaps because of, its general drop in popularity, the Latin language can claim the distinction of having the most dedicated and vivacious followers. If the languages taught in high school were jam bands, students and teachers of Latin would be “dead heads” (followers of the Grateful Dead): enthusiastic, close knit, and committed to keeping their cause alive.

Ms. Jones, in her first full year captaining the Latin club, brought to state a group of students well versed in everything from Greek mythology to Cicero. After enjoying unprecedented success at the Area C convention in Carrolton in February, the team continued its winning ways at state. The rejuvenated club performed well enough, in fact, to warrant the club’s inclusion in the national JCL convention in Virginia later this year.

“The students did a lot better than I expected,” said a glowing Jones in an interview. “I think we can only be positive looking forward.”

The TSJCL convention is held every year and features a wide array of activities on all things classical. For lovers of Greco-Roman art, drawing and painting competitions are held on the first day. Young athletes can compete in basketball and Olympika events. The engineering-inclined can take place in the catapult-building contest.

But of course, the chief driver of the convention is the academic certamen competitions, in which students test their knowledge in specific fields of study such as Greek derivatives, Roman culture, and Mediterranean geography. Based on performance in the fields of competition, teams are awarded points to determine the top Latin Olympiads in the state.

This year, Jones stepped up the club’s commitment to winning at state, preparing with students in and out of the classroom. “There are practice tests on several JCL websites, and we tried to use all of them,” explains Jones. “Outside of the regular Roman culture things we learn in class, we do most of our studying from online practice tests. When these students win, they really deserve it because they work hard for it.”

The Latin club’s preparations paid off in spades at state, where four students won individual recognition and five more finished near the top of the academic decathalon tests. Jesuit Latin established itself as a powerhouse, bringing home a team-wide total of 67 points.

Zachary Schutze, a freshman Latin student, proved to be Jesuit’s top performer, building on his blue-chip performance at the Area C Competition. Schutze took second place in the Classical Geography competition and ultimately contributed 21 of the team’s 67 points with three strong outings. “Zachary spent a lot of time looking at other states’ practice tests as well,” said Jones.

David Radoszewski ’13 also brought Jesuit distinction when he won the catapult competition. “We built an ancient Roman catapult for the convention,” explains Radoszewski, “and through our extensive knowledge of math and physics we were able to project far enough to win.”

Besides the competitions and fun events, JCL conventions always include some degree of advocacy for the classics. The common cause, preserving Latin programs against cuts, draws Texas’ Latin teachers into tight-knit bonds. Ms. Jones cites Melisande Santos, a Latin teacher at Marcus High School in Flower Mound and Jones’ high school teacher, as her inspiration for teaching Latin.

During her time at the state convention, Ms. Jones was able to catch up with Santos, who is very active in JCL activities. “I’m so glad my class got to meet my magistra,” Jones said. “She looks the same as she did fifteen years ago.”

With state behind them, Jesuit’s Latin competitors hope to make the trip to Virginia later this month for the Junior Classical League national convention. Jones noted that, pending the administration’s approval, as many as six students may travel to compete with the top classics students from around the country.

Regardless of the final outcome at nationals, one thing has become abundantly clear: Jesuit’s Latin club is serious about forming a strong program that can compete with the best. The Latin club has crossed the Rubicon with its performance at state, and, to quote Julius Caesar, “Alea iacta est.”