More
JesuitRoundup.org is brought to you by:
Home Sports Knocking Out an Interview with Boxing Stud Hector Juarez 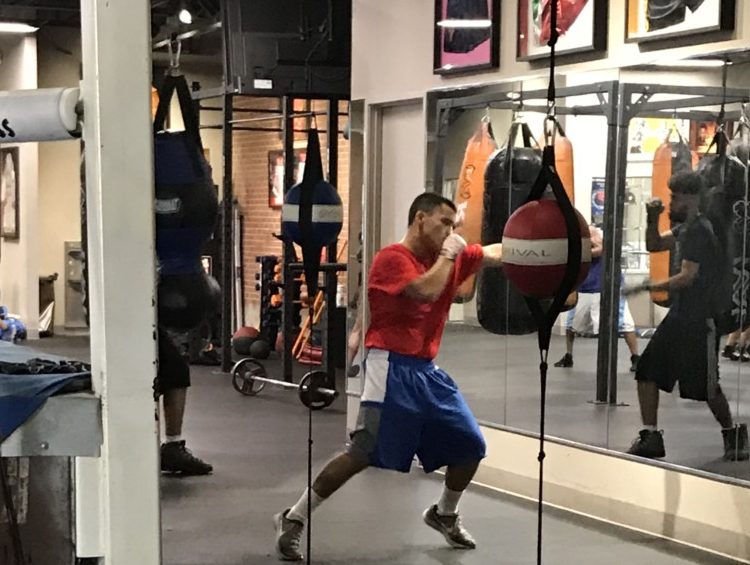 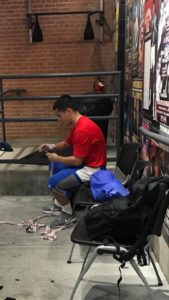 Boxing. It is not just a sport, it is an art that one must master. One up and coming boxer who is learning this art form happens to be Jesuit’s one and only, Hector “Bueno” Juarez.  Luckily, Hector was willing to be interviewed and talked about his recent boxing career. Stick around to learn more about the boxer himself.

Q: Why did you start boxing?

A: My dad was actually a boxer when he was around my age, he won several tournaments here in Dallas. Ever since we talked about that I’ve always wanted to [box], but I never had the time. I’ve done football and rugby for the past… well, first three years here [at Jesuit], but I finally decided to stop doing football and so my dad finally said, “Ok now you have the time, now I’ll pay for your gym membership,” and I started boxing.

Q: Who is your favorite boxer?

A: Right now I’d have to support my boy, Maurice Hooker, AKA “Mighty Mo.” He’s not really big, he’s not the biggest right now, but he is [up and coming]. He is from my gym. He boxes at Maple Avenue and I’ve seen some of his fights. I guess if you have to separate it between semi-pro and super-pro, Canelo would be my super-pro.

Q: Who do you compete with?

[Though] when I’m sparring, obviously I don’t have all the big selection that I do when I’m in a big tournament, so I usually just [fight] my friends there at the gym or we’ll spar with other gyms and fight whoever is closest to my body weight and skill level. Tournaments are the real thing, though sparring is just in the gym, coaches are there, they’re watching you and giving you tips and stuff But it still hurts; it’s still boxing.

Q: What is something about boxing and about you that people don’t know?

A: Boxing is a lot more technical and skill based then people think. You know it’s real easy to think of it as throwing a bunch of punches, but there is a lot of skill, a lot of strategy, and a lot of technical stuff that goes on.

For me, I guess that people wouldn’t know that one of my hobbies is making music, but like in a DJ sort of way, [but] not with real instruments. The main thing I’m working with right now is a launchpad, which is like a bunch of colorful buttons and you can play different sounds on them, it pretty fun.  It’s a relativity new hobby, I started last December, but I do like to make electronic music and perform it. I’m trying to do an open mic day by the end of the year and you know to start a rave in the cafeteria. It’s not just like playing a button, but you know actually performing it, mixing it together, going live.

Q: Are you thinking of taking boxing as a career, like in the pros?

A: Right now, it depends on how college goes. I would love to go pro, like that would be a DREAM, but it’s not my first priority right now. First priority is definitely going to college, getting my degree. And even if I do go pro I’d still love to get my degree. If I do good in college, I get my degree, I box, when I retire I got my degree to fall back on. So that would be my most power move I got right now. If I don’t go pro, I want to study to get a computer science and electro-engineering degree. Wherever that takes me, you know coding, software, security stuff, I might work for the government or some technology company, [maybe do some] airinotics or something like that.

Q: What is your motivation for boxing?

A: I box so that I can push myself and work on my independence. Boxing is a lot different from team sports. In boxing you have no excuses, you can’t blame others for dropping the ball, you can’t blame others for giving away because there are three guy in the ring and one of them is neutral, he’s not on your team. So what motivates me the most to box is self-improvement, independent self-improvement I guess you could say. But it’s all based on my drive, my ambition, [and] my mind, so yeah.

Q: Do you do any other sports that helps with boxing?

A: I’m in rugby right now. Rugby does very well with the conditioning part because rugby is like football. You don’t stop, it’s a continuous game so you got to be really good at resting in [basically] two seconds and then going all out. Interval training you know. You hit the ground, rest, then hit the ground again and boxing uses that a lot. When we train, we train with a boxing timer that’s always going off in the gym. It’s 3 min on, 1 min off, 3 min on, 1 min off, etc. So rugby has really helped with that conditioning part.

Q: Do you have a pre-fight routine?

A: Not really, I just get my mind right. I don’t really talk to anyone, sometimes I’ll have music in and I’ll just be visualizing the fight and [thinking] about what I’m gonna do, what’s my strategy. All that while I’m listening to music.

Q: What type of music do you listen to when you visualize your fight?

A: It varies, sometimes it’s the Fight Night soundtrack, which is a little boxing game on the Xbox. That’s always fun. Sometimes it’s rap music, sometimes it’s rock. But it really doesn’t matter, just something to block out everything else, because you got to be good doing that. You got to become good at that especially when you’re in the ring, when you have a lot of people watching you [and all you have to be doing] is focusing on the guy in front of you and nothing else.

A: Creed. The first one because it’s where he quits his job and I thinks that’s really great to see because a lot of movie cliches is that your down out of your luck and boxing brings you back up. But in Creed, he’s not down on his luck, he’s got a good job with a good income, but he doesn’t get satisfied with that, he wants to do better, wherever he’s at and I think that’s what I want to do. You know, I can be at the best computer science job and making a lot of money, but I don’t want to stop there, I want to keep going.

Q: What is your boxer name?

A: “Bueno”. It’s always been a name. “Bueno”, that’s just what it is. Hector “Bueno” Juarez, people call me “Bueno”, sometimes they refer to me as “The Bueno”. Like, “Hey, it’s ‘The Bueno’” When they talk to me they’re like, “What’s up ‘Bueno,’” or “GO BUENO!” So that has always been… fun [I guess]. Since middle school that has been my name. I don’t really know why though. A lot people call me “Bueno”. I swear there are some girls at Ursuline who don’t even know me as Hector, they’re like, “Hey ‘Bueno’!” and I’m like, “They don’t even know my name.” But a lot of people here [at Jesuit] call me that too.

Q: What was the hardest fight you had to go through?

A: My first sparring match, my first ever time I sparred. Well, it wasn’t my first sparring match, it was my first sparring match against another gym. We traveled to another gym, it’s called the Black Out Boxing Gym I believe. I had never fought anybody who wasn’t at my gym/team, the Maple Avenue Boxing team. So I fought this dude, I think he was 21, but he was my weight so they let him box me anyways. He was a big dude and I mean he was long and he was tall and I’ve never gone against a dude so I got smacked. I hit a few times but then I got smacked more times, my nose started bleeding, and then towards the end of it he freaking went WHAM WHAM and that’s the first time I just sort of started got knocked out, because my eyes were open, but it just fades black. It’s like, “What the heck? I can’t see!” and that was the first time I had an experience like that. So I was like, “Oh my god, I can’t see!” We weren’t in a full on tournament, but they stopped the fight before I hit the ground. But that was the hardest fight I had ever been in because it was mentally and physically just a beating. So I had to drive all the way back to Dallas after getting smoked in the head [laughs], so be careful not to drive recklessly with a freaking concussion. But yeah it was fun, it was a learning experience. It was one of the most difficult, but also one of the most fun [fights] that I’ve had. I can look back on that and see the progress I’ve made. 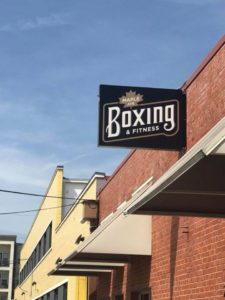 Q: What was your favorite fight?

A: My favorite fight was [when] I was sparring a new member of the gym and I felt really confident because they knew I knew what I was doing because they trusted me with someone new. So they told me to obviously don’t kill them, and I didn’t kill him. I helped him out and it felt good to know that since the last sparring match I told you about I was good enough to, first of all, let someone go all out on me and not even get punched and also be able to spread what I like about boxing to someone younger than me, not as good as me, hopefully one day be as good as me if not better. That was definitely one of the favorite fights that I’ve had.

Q: What is your advice to people who want to box?

A: I think to sum it up: just do it. What a lot of people seem to be scared of and what I was at times was being too young or not having the right body type. You know, being to fat, not being in condition, but I think it’s good for anyone and everyone. Even if you don’t fight and just do it for fitness it’s a great sport. It teaches you a lot of coordination. Just do it, that my advice: to just do it and don’t be scared. Don’t be afraid to talk to new people, meet new people, and try it out. I think everyone should once or twice get in the ring. I’ve seen people at my gym from some huge fat dude down to some old soccer moms get in the ring sometimes. Anyone can do it, that’s what it comes down to. It’s all you, you don’t have to carry by team and you don’t have to carry anyone on your team, it’s all you. It’s a very empowering sport to do.

Hector is still training to become the world’s next great boxer. If you have any questions for him he is willing to answer them. Just don’t be surprised to see his name pop up in boxing news in the coming years.

P.S: Ladies, Hector is currently looking for a prom date so don’t be scared to hit him up!