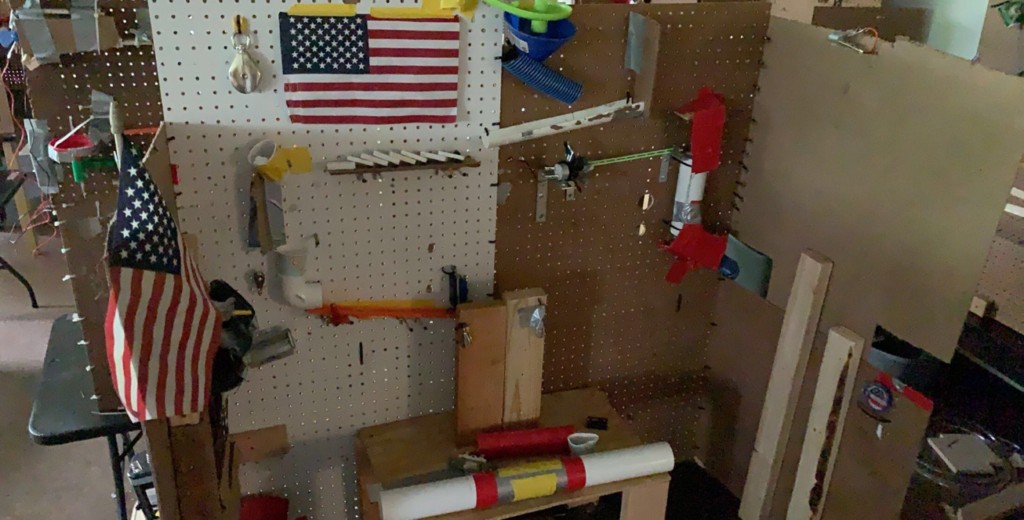 Recently, the sounds of marbles falling, saws cutting, drills whirring, and people shouting have become an ordinary occurrence in the upstairs B hallway. For roughly the past month, physics students have dedicated hours each day to perfecting their Rube Goldberg Project. The Rube Goldberg Project essentially combines all of the aspects we learned in the second semester of physics into an elaborate machine; energy transfers, simple machines, and calculating mechanical advantage. The final task of the machine was to fold a piece of paper, but it was supposed to take a minute to do so.

Using large pieces of pegboard, and in some cases, plywood, students built the bases of their projects to suit their brainstormed ideas. Following the base-building, they then moved on to building the actual project, most people setting up funnels at the top of the base to start the marble. After that, they began working on completing the specific tasks such as the three required simple machines, the projectile, a circuit, and five energy transfers. Finally, the time came to begin figuring out how to fold the paper. After completing these various requirements, students presented their projects to the intimidating panel of judges, consisting of Ms. Watts, Mr. Kweik, and Mr. Von. This was the most crucial part of the project, as not only all their hard work from the month was being displayed at one moment, but students also had to answer a slew of questions from the judges while facing immense pressure.

My personal experience working on the Rube Goldberg Project was very engaging, challenging and fun experience because it allowed me to actually apply things I learned in the classroom into real-life scenarios. It was an amazing way for me and my group members to display our creativity while at the same time demonstrating our knowledge of physics. In my opinion, it was the best academic project I have experienced so far at Jesuit and I hope to see more projects like this in the future.

“The Rube, while stressful and frustrating at times, was an interesting project which was quite different from any project that we’ve done before. It was a difficult endeavor due to the communication and teamwork which was required among our group, but this was all forgotten once we finally, after dozens of tries, got our project to work correctly. If I had to compare that feeling to something, I’d say it’s like the feeling of realizing one’s child is all grown up, partly due to the hard work one put in to mold one’s child, like a moist piece of clay, into a successful and mature person. While I’d probably never want to do this project again, I’m glad I completed it this one time and recognize that the experience is one which will stick with me, like a mosquito on a dab of grease, for a very long time”

“Having to build the Rube Goldberg machine with my group was definitely a super fun experience. Our group was able to really work together to problem solve and find the best ways to complete our project. Not only was this project a really fun experience, it was also a really great bonding experience for everyone involved.”

“The Rube Goldberg was a really great way to end the year off in physics. It was fun to be able to actually use what we learned in class and apply that information to the project. Even though it was a good experience, at times it was very stressful and took lots of effort. The calculations were also very hard.”

Stay tuned to The Roundup for more Jesuit academic news!