More
JesuitRoundup.org is brought to you by:
Home Sports Basketball Jesuit’s Winning Streak Comes to a Close against Berkner 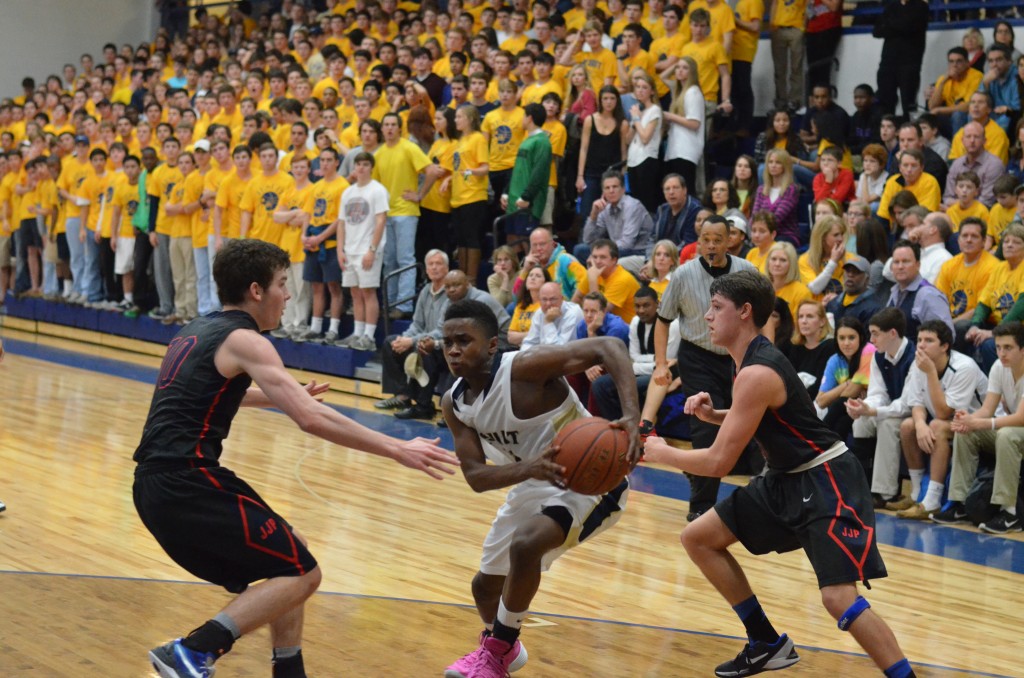 After starting off the season cold, Jesuit has turned it up a notch. In district play they have been playing like a team that can do damage in the playoffs.
In the middle of district play, Jesuit has been on a hot streak winning five of the last six. After the thrilling JJ Pearce game, the team went on to win three in a row, beating Sunset 68- 54, Richardson 52-40, and Skyline 40-38. Unfortunately, due to a controversial ending, Jesuit lost at home to Berkner 72-80 in overtime.
Before this winning streak, Jesuit defeated JJ Pearce in dramatic fashion, with Matthew Bender tipping in the ball for the game winning basketball at the buzzer, leading the fans to rush the court. Varsity basketball Coach Christopher Hill said that the team “felt positive after the game, and that it helped us get going.” Winning a game like that really made the team  feel confident about their game as a team.
“The Jesuit players have really been believing in the team system,” stated Coach Hill. “The bench players have been really important in practice and filling their role in the game, and the starters have been really good at making plays. No one is more important than the other, and everyone is buying into that.”
The game after the big win, Jesuit played Sunset at the Sprague Athletic Center, and Sunset came out firing. They did not really have that good of a record, but they came out and made multiple three right out of the gate, and even throughout the game were hitting whatever shot they threw up.
Despite their superb shooting, the Bisons’ defense was not good enough to handle the Rangers’ dynamic offense which led to the Jesuit victory.
On that following Friday, Jesuit played Richardson, with a very packed crowd to watch the second and third place teams in district play. Fueled by the crowd, Jesuit put on a spectacular defensive effort against Richardson.  Coach Hill noted the defensive energy, saying that it was the “best defensive effort in the six years [he has] been” at Jesuit. The Jesuit defense stifled them, winning the game by only allowing 40 points by the 11th ranked offense in the North Dallas area.
The next game, Jesuit played Skyline for a second time, this time at home. Previously, they played Skyline on the road, and beat them in a dominating performance; nonetheless, Skyline proved tough in the Walsh Gym. It was close to the end, and the score was changing dramatically. Jesuit was up one and then Skyline went up one. This circle went on most of the fourth quarter until Jesuit got an and-one with 7 seconds left, securing the victory.
Finally, Jesuit played their archrival Berkner in a critical matchup in district play. They played this game in the comfort of the Jesuit gym. Jesuit kept it close against Berkner on the road, but were now looking for a better result, a win. At first, the game started out pretty even, tied 14 to 14 going into the second quarter, but then a big Jesuit run occurred, caused by the great offensive and defensive work demonstrated by Jesuit.
The score was 33-25 entering the half and at the start of the quarter, the tempo was still in the favor of Jesuit, but the lead was dented by 3. The students started to chant ‘I believe that we will win’ and the players were feeling the pressure. Berkner tied up the game with 2 minutes at 63, and then the controversy arose.
Jesuit, inbounding the ball with under a minute left, was faced with tough defense and high pressure by the Berkner players. Within about three or four seconds of inbounding, the referee preceded to call five seconds, resulting in a turnover and Berkner ball. Coach Hill said that he should have called a timeout in that situation, but also thought that the referee made the call a little too quickly.
After this exchange, Berkner had the ball, but junior forward Michael McReynolds took a great charge and Jesuit made another great play, giving them the ball under the basket with 7 seconds left. In the words of Coach Hill, “I went to go get water. I was worried obviously, but not that worried. I thought we would get the ball in, they would foul us and we would control our own destiny. However, I was not there in time to call the timeout.” Yet again, however, coach thought that the refs called the five second call a little too early.
After the call, Berkner tied the game with 0.6 seconds left, forcing the game to go into overtime. With momentum behind them, Berkner came out with a bang, and destroyed Jesuit in overtime, winning 80-72.
Jesuit is currently 7-3 in district, holding the tie breaker on Skyline who is also 7-3. Jesuit is also a game back from Richardson and two games back of Berkner, which is why the game against Berkner was so critical. Jesuit essentially controls their own destiny to the playoffs starting with W.T White and then a huge game against Richardson on the road, which could decide the second place team in district. Go Rangers!