More
JesuitRoundup.org is brought to you by:
Home Sports Hockey Jesuit’s Version of Miracle Ends on the Ice against Arlington High 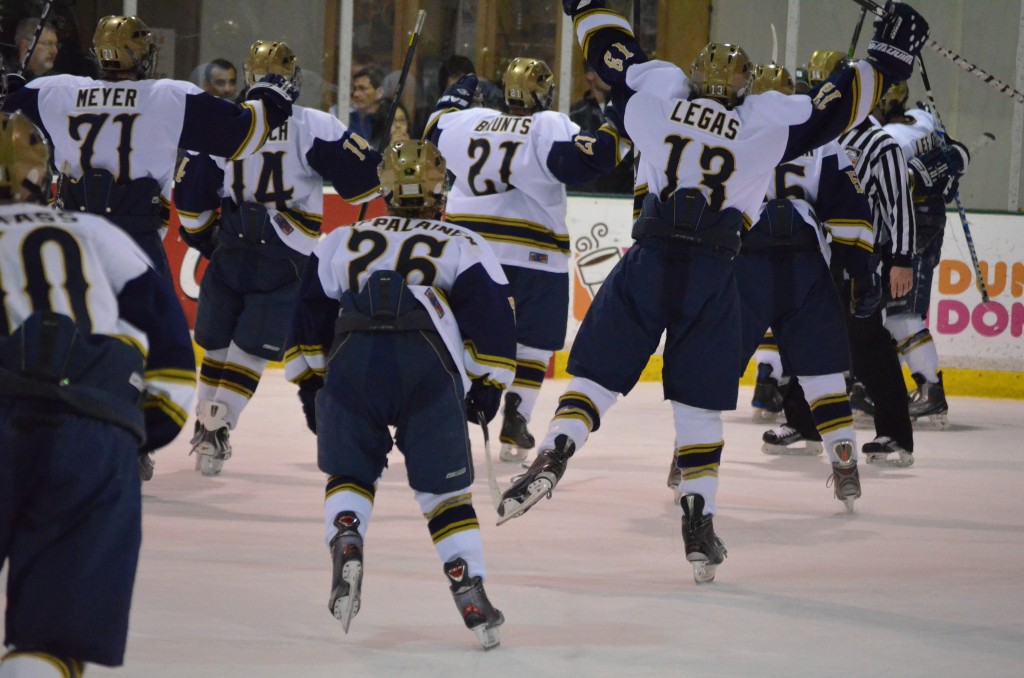 The Jesuit Hockey team entered the Dallas Metroplex Hockey League playoffs as the #4 seed and had a chance to be the best team in the state, but fell short after an inspiring first round.

The Rangers had a date in the quarterfinals against the Allen Eagles at Dr. Pepper Stars Center of Farmers Branch. The Rangers didn’t show up to play, falling down 3-1 to the Eagles in the early minutes, but proved otherwise as they stormed back to tie the game at three early in the third period. 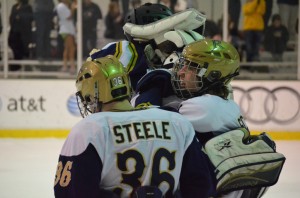 The third period ended with the Jesuit crowd holding its breath, as Allen had a break away shot that missed wide with just seconds left in the period, sending the game into overtime.

Hockey overtime being sudden-death in which the first goal wins, had everyone in the rink nervous as shots flew by the nets and edged the goal. Jesuit didn’t take long to find the net, as a deflected shot found its way off what appeared to be into the net.

However, the officials overturned what would have been the game winner. Allen couldn’t hold the Rangers much longer though, as John LeFlore ’13 scored just seconds after the no goal call, causing the Jesuit fans to erupt as the Rangers would now advance to the semi-finals. This marked Jesuit’s fourth ever appearance in the semis.

The semi-finals featured a matchup with the #1 seed in Arlington High School, who 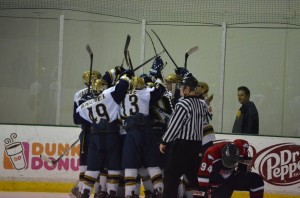 boasted a 15- 6 record. Jesuit was able to hold their own in the first period, only down 1-0 to the best team in the conference, and had many goal-scoring opportunities.

Arlington looked to be in cruise control until Vili Lappalainen ’15 put the Rangers on the board in the second period. Jesuit looked to be gaining some momentum after this goal, and maybe another comeback was in store for the Rangers, but Arlington would have none of that.

Arlington scored once more to end the period, and added four more goals in the third, as Jesuit could only manage to put one more in the net. The final score was 8-2, and Arlington stomped their way to the finals.

Remarking on the season, Coach Campbell said, “I don’t think the ending ruined the season. All in all, you take into account the full season, not just a one game deal. In the end, I thought we had a good season. We finished with a win percentage up around .700, and we have lots of things to be proud of. That night, Arlington was at their best and we weren’t.”

Ian Berry, a teacher-coach and former Jesuit played said, “The most exciting games this year have been when that team plays, that aspect of everyone working together has come together. The game against Allen had some early mistakes, but we were able to fight back from it. We just didn’t have that against Arlington.”

Looking into next year, the Rangers will return their top four goal-scorers in Hayden Meshell ’13, John LeFlore ’13, Nick Alexander ’13, and Drew Brunts ’13. On next year, Coach Campbell said, “We are going to need some help on getting a goalie, but we should have a pretty good group next year.”

If you want more information on the Jesuit Hockey team, or the up- and– coming team for next year, visit their webpage at http://www.jesuitcp.org/page.aspx?pid=1788 .