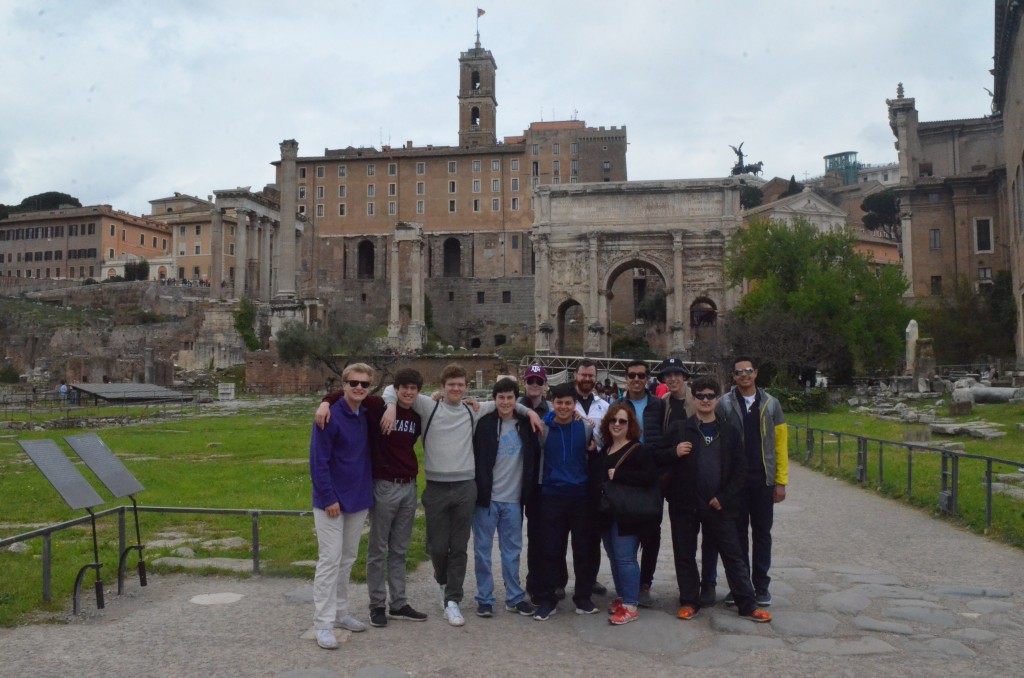 The roaring engines fired up to full potential. The Airbus quickly gains speed as it zooms across the runway, gradually lifting its front wheel from the tarmac. The plane finally lifts off and disappears into the bright blue sky as it heads towards Italy. The Jesuit students watched as their Italian friends returned home.

Four months later, on March 11, an exuberant group of 12 Jesuit students – Rory Allison, Jaylon Briscoe, Carson Christensen, Jackson Dormer, Nico Elizondo, Killian Leonard, Joshua Marshall, Matthew Peracchi, Daniel Reed, Chris Reynders, Giovanni Rivas, and Ryan Szczepanski – accompanied by Ms. Druebert, Mr. Hornsby, and Mr. Croteau, board an Airbus of their own. After a 3-hour flight to New York, where they endured a several hour layover, and a 9 hour flight to the Milan-Malpensa Airports, our Jesuit students were excitedly greeted by their Italian host families. And so began an astounding two-week journey into a new world – or an old one.

The trip began with a calm Sunday that students used to enjoy time with their host families and to settle into their homes for the week. The next day, students attended classes with their host and got to see the Instituto Leone XIII for themselves. The Jesuit school was much different than Jesuit College Preparatory School of Dallas that they were used to. The main building was 5 floors, the athletic section included a separate building of multiple floors and multiple outdoor fields for different sports, among other differences. However, for Jesuit Dallas students, the main inconsistency was the presence of female students in the same classrooms. The Dallas Students were quickly able to make friends since all the students at Leone speak English, thanks to their rigorous English program. Students were able to experience what a normal school day for the Jesuit school in Italy was like, and the 2 o’clock dismissal time was a very popular feature. Students then went their separate ways and enjoyed a normal afternoon while they also discovered the immense appetite of their Italian hosts at the dinner table.

For the rest of the week, the Dallas students, accompanied by their hosts, were taken around Milan and shown historic sites and landmarks, such as the magnificent Duomo di Milano, the Sforza Castle, and the Arco della Pace to name a few. Students were even able to see Leonardo Da Vinci’s Last Supper and his vineyard. Later, they helped Leone XIII collect food for a small parish’s soup kitchen. The next day, their trip to Venice allowed the students to see the “City of Water.” While in Venice, students enjoyed a luxurious gondola ride and an amazing lunch which Mr. Croteau says he will never be able to forget “that calzone, though.”

Next day’s visit to Lago Maggiore provided more beautiful scenery as students roamed two of the three islands on the lake. There, they took in the beauty of the Italian geography and enjoyed some freshly caught fish. The week was coming to and end, and students had to pack their backs, say goodbye to their host families, and continue their journey to Florence.

Florence was a whole new experience. The group met their tour manager, a young and handsome sweet-talking 23 year-old native Roman, who would guide the group for the rest of their trip. After visiting some beautiful churches, Giorgio, the tour manager, took the group to Galleria dell’Accademia, where they saw amazing artwork, including Michelangelo’s David, leaving everyone in awe. The group then walked through Florence, amazed by the architecture and abundance of classical art casually spread throughout the city, and made their way to the magnificent Ponte Vecchio to do some shopping in the Leather Capital of the World! Finally after a nice dinner, where many enjoyed a special Florentine Steak, the group walked back to their hotel to settle down for the night and get ready for Rome! On the way, Jackson Dormer managed to bargain for some laser pointers that would torment the chaperones for the rest of the trip.

After a lengthy train ride, the enthusiastic Latin students were finally in the city they had learned so much about: Rome! Their stay in Rome was no less amazing than they could have hoped for. They visited the aqueducts, walked in the center of ancient Rome (the Roman Forum), toured the Colosseum, trekked along the first and largest Ancient Roman road (the Appian Way), raced in the Circus Maximus (Nico Elizondo stands as the Jesuit Circus Maximus Champion), and strolled through the city where traces of Ancient Rome were all but rare, or as Jackson Dormer would say, “cool old stuff.”

A big highlight of the trip was all the opportunities provided for the students to reconnect with their faiths, or admire the physical beauty of the Catholic presence in Rome. On their visit to Vatican City, the group visited the Sistine Chapel and witnessed its breathtaking magnificence. St. Peter’s Basilica left the group speechless as they admired its massiveness and grandeur. Finally, students ended their trip with a visit to the Gesu and to the apartments of St. Ignatius, where a fellow Jesuit friend of Fr. Hooks met the group and gave them a tour. There they celebrated a mass in Latin for the Feast of the Annunciation before heading off to dinner. The group killed off the rest their trip with a dinner at the site of Julius Caesar’s assassination, near the Theater of Pompey.

“Overall the trip was amazing,” Nico Elizondo remarked, “Not only were we able to learn about the culture of the Italians, but we were also able to learn about each other, growing closer to each Jesuit Dallas member on the trip. I think something I enjoyed the most was the brotherhood that we were able to share together (as the Dallas kids) and also with the Italian Jesuit kids. Being able to exchange with them and live in their homes for an entire week really allowed me to fully immerse myself into their culture and learn how they do things and draw comparisons and differences of how things are done here.”

Chris Reynders similarly commented that “Italy trip was unique from any other experience I’ve had in my life, I was able to live with a genuine Italian family and live in their culture while also having the opportunity to travel around world renown spots filled with years and years of history.”

Daniel Reed, who “worked for about 8 months to pay for [the trip],” sums up the thoughts of all the participants in Jesuit’s first Italy Exchange program, “worth.”

The experience was truly “worth” it for the passionate Latin students, for it was an opportunity not only to truly see the ancient core of Latin in person, but also to interact with the people who most continue to live on the legacy.