More
JesuitRoundup.org is brought to you by:
Home Sports Football Jesuit Wins Second Ever UIL Playoff Game in a 45-10 Dismantling of McKinney Boyd 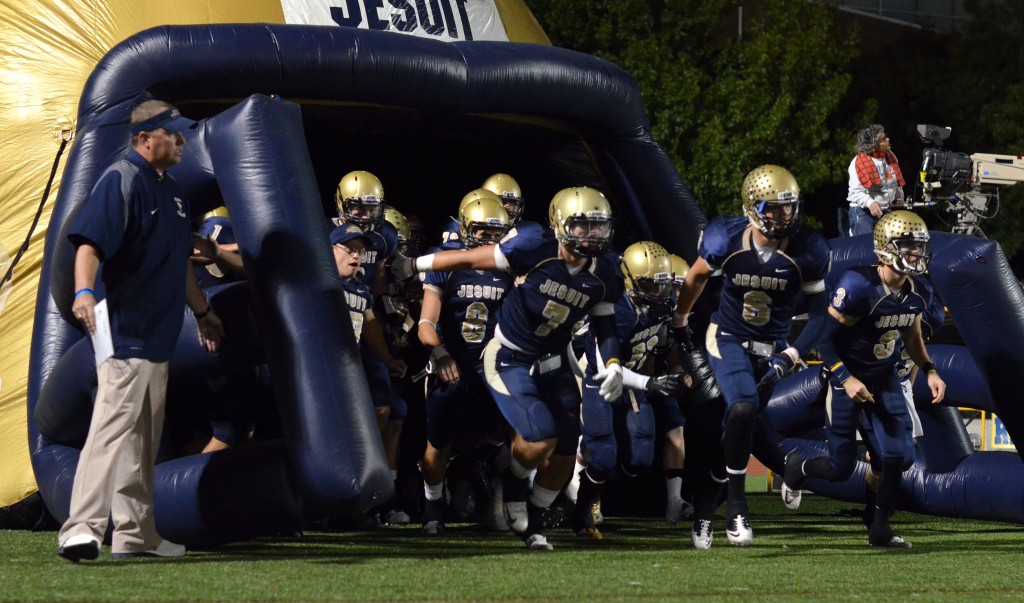 “It [is] time to get that monkey off our back so to speak,” said Coach Brandon Hickman to his players all week in preparation for their bi-district matchup with the Division 2 winner of 10-5A, McKinney Boyd.  In its almost ten year history in the UIL, Jesuit had only once won a playoff game – a win versus Samuell in 2004.

On Friday November 16, 2012, Jesuit traveled to Plano Clark Stadium to meet the 6-4 Broncos, a team led by star running back Bryan Driskell who rushed for over 5,000 yards in his four-year career at Boyd.  Hickman’s team came out with an intensity unparalleled all season.  “I had never seen that look in their eyes all season,” he said.

As the game opened up, the offense was not able to hit their stride early, and things looked dismal for the Rangers in the 1st Quarter.  Absolutely nothing happened until Driskell busted a long 94-yard touchdown right down the sideline in front of Jesuit players.  That’s when the Rangers began to pick it up a notch.

In the 2nd Quarter, the offense and defense both seized all the momentum from the Broncos.  Jesuit finally got on the board 4 minutes into the 2nd Quarter when they found a little bit of luck on their side.  LB Jordan Mastrogiovanni ’13, who only goes in on offense for a certain formation saw that intended target WR Jake Oliver ’13 was covered on fourth down.

He rolled out, and QB Jack Brezette ’13 knew exactly what was going on.  The pass for Mastrogiovanni was tipped two times, but nonetheless, with good awareness and athleticism, he dove for the ball and came up with it.  This kind of play is the kind that will take the breath out of opponents, and it sent the Jesuit sideline absolutely wild.

“That was just a good heads-up play [by Jordan],” said Hickman on the sideline.  On the ensuing kickoff, Jesuit recovered a fumble and was right back on the field.  This time the offense ran a play designed for Jordan, and like that, the starting linebacker, committed to Oklahoma, had two touchdown catches to give his team the lead.

The next drive for McKinney Boyd saw them get their last 3 three points of the season, as K Patrick Ladd split the uprights.  With a minute left in the half, the team aimed to drive down field to make the most of all their momentum.  “Let’s go find the end zone,” added Brezette, who has really stepped it up in the last four games, throwing zero interceptions.  With 8 seconds left, Oliver jumped up high in between two Boyd defenders and came down with the touchdown, giving Jesuit a 21-10 lead.

During halftime, coaches focused on not letting up.  The team was determined to fight for the name on the front of the jersey, not on the back – for the first time ever the football jerseys had last names on the back.  As they came out of the locker room, more emphasis was put on “keeping the foot on the gas.”

The 3rd Quarter was quite possibly the most dominant 12-minute period the defense had played all year.  Two plays in to the half, Boyd had already fumbled twice, and the Rangers recovered the second.  Strong running by WR/DB Orion Salters ’14 and RB Will Brown ’13 extended the Rangers lead as Brown pounded in a 3-yard score.

The next McKinney Boyd drive, DB John Paul Bach ’13 came up with a diving interceptions, as the turnovers continued to rain down in Jesuit’s favor.  The next drive, K Cody Wicker ’13 added three points on a 34-yard field goal.  Again, Boyd fumbled as Driskell seemingly fell down and lost the ball, giving Jesuit yet again supreme field positioning.  RB Pierce Durham ’14 came into the game for a concussed Brown and added his own scores to the total, put Jesuit up by 28 points at the end of the 3rd.

At the start of the 4th Quarter, QB Curtis Ladd fumbled again, and Jesuit had recovered their third fumble of the night.  Jesuit used up a lot of the clock, and Durham added one more touchdown to make the final Jesuit 45 – McKinney Boyd 10.

Leaders for the game:

At the middle of the field after the game, the Rangers were awarded a Bi-District Champions trophy, but Hickman commented, “We want five more golden footballs just like that.”  Oliver, a four-year letterman, told his teammates “to not be satisfied yet, because there’s more to come.”  On the way back to the bus after the game, Mastrogiovanni declared, “that can’t be us, going home empty-handed.”

The Rangers continue their march in the playoffs tonight against the Longview Lobos (8-3) at Wildcat-Ram Stadium at 7:00.  Come out and cheer them on as they look to make Jesuit Ranger football history!