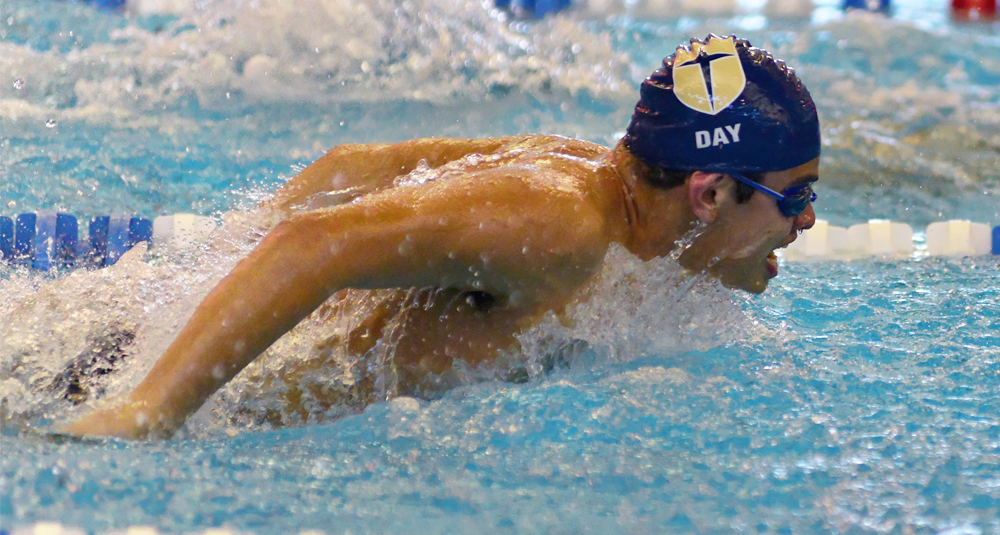 Confidently lowering himself onto the block, the Jesuit swimmer crouches down, gripping the hard, ridged block with both hands. Having practiced this same routine hundreds of times before, the swimmer gazes only into the deep blue abyss, patiently awaiting the starter’s whistle. A shrill, piercing whistle rings throughout the building as the swimmer launches himself off into water, carrying his team to victory.

Both the Varsity and Junior Varsity teams for Jesuit Swimming and Diving competed on Saturday January 6th in the annual Kyle Tilley Invitational Meet in Lewisville, Texas. Unlike most other meets where only a handful of swimmers compete, the Kyle Tilley Invitational hosted between 800 to 1,000 swimmers all across the state of Texas. The meet was founded back in 2015 after a coach for the Lakeside Aquatic Club was killed in a car accident at the young age of 26.

While the large number of swimmers may have intimidated some of the teams, the Jesuit swim team has competed in this meet and other big meets all season, and was ready to step up to the challenge. One of the captains of the swim team, Charlie Day ‘18, commented on the great overall performance of the team, “especially considering that we have struggled getting pool time over Christmas break, [so] I am really proud.” Day continued by complimenting the hard work and dedication of sophomore Abraham Martinez, “who cranked out 2 new personal best times.” Charlie concluded by noting the great team spirit and effort. “At this point in the season, the dedication shown throughout the team in making time for practice is something to be proud of.”

Furthermore, Ryan Brown ‘20 complimented the swims of Martinez and junior leader Braden Barale on their fantastic swims. Freshman Ryan Peckham went a season best 5:14 in his 500 free, an astounding swim for such a young swimmer. Brown mentioned the great team spirit, observing how engaged the team was during the relays as well as the effort to cheer on other swimmers during their specific events.

There were some setbacks at the meet that forced the Jesuit team to rethink their strategy. The increase in the number of swimmers at this meet caused many of the Rangers to wait several hours between their events, causing all of the pre-meet preparation and warming up to wear off. Though the increase in time between events and the overall larger size of the meet did provide some challenges for the Rangers, sophomore star Alexander Cho thought “we did a good job of keeping track of our events despite the ridiculous wait times.” Cho also noted the great improvements made by many members of the team. This meet served as a good measuring point for Head Coach Doug Moyse to determine which of his swimmers were ready for the Varsity District meet versus the Junior Varsity District meet.

The Rangers concluded their regular season schedule with the Kyle Tilley Meet, and look ahead to the postseason swim meets in the upcoming weeks. The Junior Varsity team will compete on Friday January 19th for their district crown, while the Varsity crew waits until January 26th to compete for a District championship. Keep up with The Roundup for all of your Swimming and Diving news!