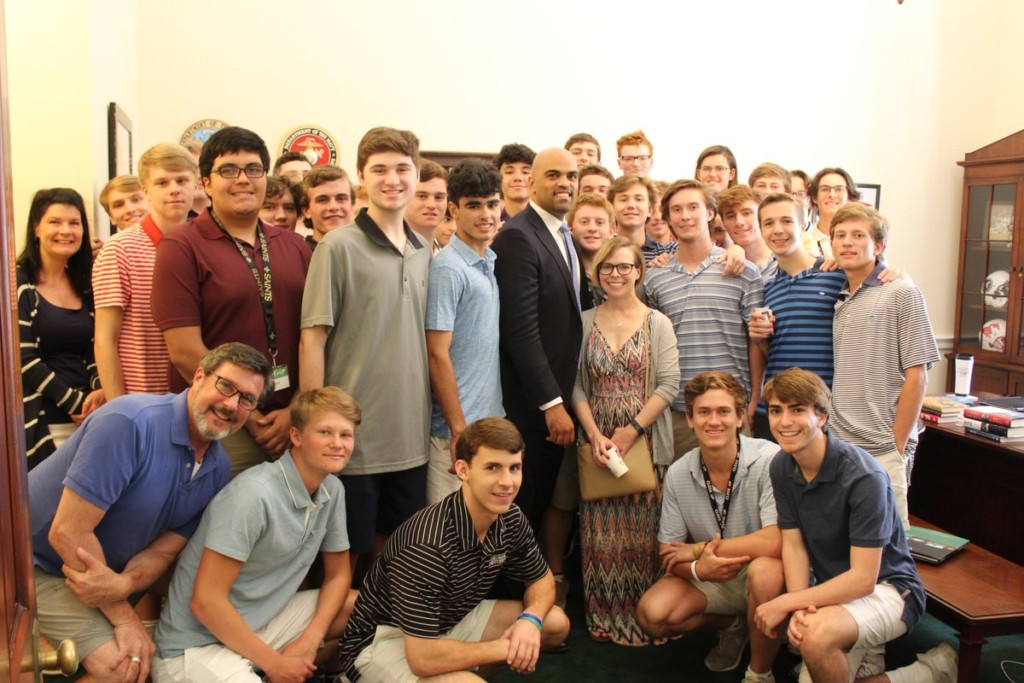 After enduring an accelerated government class for two harsh weeks during summer school, 35 rising Jesuit seniors embarked on a week-long trip to Washington, D.C., to further expand their understanding of American government. Accompanied by Mrs. Ochs, Mrs. Segal, and Mr. Host, these students participated in a program known as Close Up. Certified tour guides with expertise in the US political system lead participants around the city to see important sites and the various monuments. These visits often involved lessons from the Close Up leaders. Many paralleled the curriculum taught in the classroom portion of the summer.

Jesuit students arrived in Washington on the morning of Monday, June 24. Upon arrival at the hotel, students were served lunch and got acquainted with the Close Up staff. After a short discussion in small groups about political values, the class embarked on a tour of several major monuments in DC.

First Day in the Capital

First, the class visited the Thomas Jefferson Memorial, located just off the shore of the Potomac River. After circling the rotunda and viewing the Declaration of Independence excerpts, students participated in a discussion about Jeffersonian principles of limited government. Next, the group traveled to the Franklin D. Roosevelt Memorial. The memorial featured sculptures depicting scenes from the Roosevelt presidency, throughout the Great Depression and World War II. Lastly, they visited the Martin Luther King, Jr. Memorial, commemorating the iconic civil rights leader, which featured a sculpture of King’s face alongside many inscriptions of his quotes.

Later that night, the students watched a live debate at the hotel between a liberal and conservative, fielding questions to the two participants.

Jack Welp ’20 said that “watching the debate between them was really fun. I liked to see them both articulate their views and make an argument for their opinions.”

The next day, the class visited the National Air and Space Smithsonian Museum. Students explored the history of aviation in the United States, followed by a visit to the National Museum of American History. During the afternoon, Jesuit went to the US Institute for Peace, a governmental organization dedicated to fostering diplomacy across the world. Lastly, they visited the Mexican Cultural Institute, an arm of the Mexican Embassy. Here, they learned about the influence of Mexican culture in the United States and the history of US-Mexico relations.

The evening featured a trip to Arlington National Cemetery, where the group saw the tombstones of various figures throughout American history. After dinner, the Close Up team guided the students on a nighttime monument tour. There the visited many monuments including the 9/11 memorial.

On Wednesday, the day began with a tour of the several war memorials in DC, including the World War II, Korean, and Vietnam memorials, as well as the Lincoln Memorial. The theme of the tour centered on the cost of war and the history of military action in America.

After that, the class went to the Newseum, a museum about the history of the American media. After lunch, the next stop was the National Museum of African American History and Culture. Students traversed the eight floors of the museum, each representing a different aspect of black history and culture. On the way, students saw Emmett Till’s casket as well as a sports exhibit donated by LeBron James.

For many students, this was the highlight of their week. Mark Huber ’20 said, “The African American history museum was one of my favorite parts of the trip. Getting to see Emmett Till’s casket was really special, even though the wait was so long, and I loved the exhibits about black culture. It felt really relevant to me.”

That night, in preparation for Thursday’s visit to the Capitol, the Close Up team led a Mock Congress in which students played the role of various figures on Capitol Hill.

Thursday was the most exciting day for most of the class. It began in the gallery of the US House of Representatives, where Jesuit students sat in on a morning session of the chamber. Next, they met with the House chaplain, Father Pat Conroy, a Jesuit priest who serves the spiritual needs of the House of Representatives. He shared with the students some of his favorite memories during his years of service to the chamber.

After that, students traveled to the Cannon Office in the House to meet Dallas-area Rep. Colin Allred. After a short question-and-answer session with Rep. Allred’s staffers, Jesuit got the opportunity to meet the Congressman himself, who talked about his path to Congress and his similar experiences growing up as a young man in Dallas.

Jesuit students had lunch in the Senate cafeteria, which was followed by a visit with staffers from Texas Sen. John Cornyn’s office. The staffers talked about their jobs during the meeting, which took place in the Senate Intelligence Committee room.

The day was finished with a night out bowling. For Thomas Johnson ’20, Thursday was his favorite day. “I had a ton of fun getting to meet my Congressman, go around the Capitol, and then go bowling afterward. It was such a fun day.”

Friday was the final leg of the trip. In the morning, the class visited Atlas, a think tank that employs Jesuit graduate Eric Eppig ’13. They learned about the role that thinks tanks play in crafting national policy. Many students expected this to be the last experience of interest during the trip.

That all changed during the students’ time at the airport. The class ran into Senator (and presidential candidate) Bernie Sanders of Vermont. After being discovered by a group of students wandering the airport, the whole class got up to go find the Senator before swarming him until he stopped to take a picture with the group.

George Sweda ’20, who was one of the first students to find Sanders, said, “I was shaking after I saw him. It was such a crazy and unexpected thing, to see him at the airport. We got a picture and everything.”

All in all, the trip was a fun experience for all of the students who took part. After arriving back in Dallas, Mrs. Segal referred to the group as “the best group she had ever had on the trip.” She praised the questions the group fielded to the speakers and the level of participation among the students. From visiting the many iconic locations throughout DC to meeting two Members of Congress, the trip was an experience they won’t forget.