More
JesuitRoundup.org is brought to you by:
Home Sports Soccer Jesuit Soccer Impresses at Duncanville Tournament 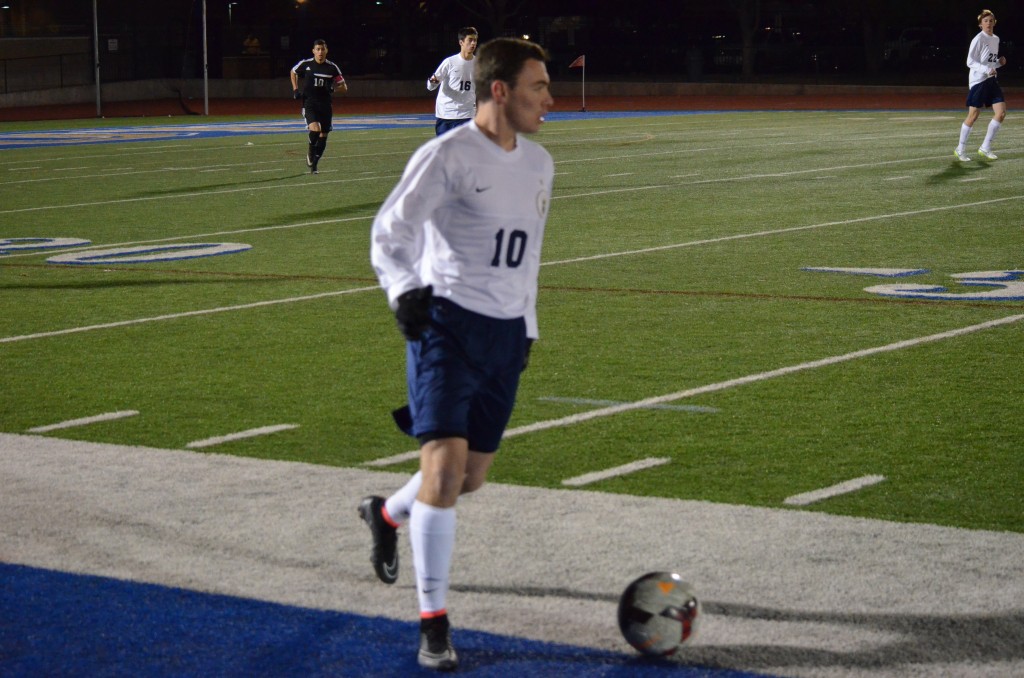 The bright fluorescent lights illuminate the deep green pitch, and a cool breeze ruffles the hair of the exhausted players while a few glowing stars linger above in the black and blue sky.  Nothing can be heard but the piercing shriek of the referee’s whistle, the anxious shouts of the fans, and the grunts of the players.  The restless crowd watches in apprehension, holding their breath as the Jesuit strikers attack the ground, running full speed toward the opposing goalie.  The Jesuit player makes the kick, the goalie lunges at the ground, the ball tears into the back of the net, and the fans erupt from their seats, howling and clapping and high-fiving anyone they can see as a gentle coolness descends upon the still night air.

This is the exciting atmosphere of every Jesuit soccer game, thrilling spectacles of effort, hardship, camaraderie, and victory.  Jesuit recently competed in a three game tournament in Duncanville from January 15-17, playing Grapevine, Molina, and Duncanville.

Jesuit first played Grapevine, an exciting game that ended in a 2-2 tie.  Head Soccer Coach Charlie DeLong commented, “we did all we could to win the game.  We came out strong early, making it 2-1 and then gave up a poor goal near the end.”  Varsity player Pryor Miller 16’ agreed, describing the game as “down to the wire until the dying moments of the game.”

Jesuit then played Molina High School, easily dispatching them with a final score of 5-0.  Miller believed that “[they] took full advantage of [their] opportunities in the game against Molina.”

Finally, Jesuit battled Duncanville High School, “a future playoff opponent” according to DeLong, in the last game of the tournament, rallying until the final minutes but eventually losing 2-1.  Coach DeLong remarked, “we started slow, ending the half down 2-0.  But then we scored within three minutes and I honestly believed we were going to make something happen.  Unfortunately, we ran out of gas at the end of the game.”  Miller agreed, stating that “[they] didn’t have it in [them] to finish Duncanville off.”  However, Miller also commented that senior captains Jacob Su 15’ and Ben Sloan’ “really stepped it up in motivating [the team] to play as a more cohesive unit.”

Emotional support from the team leaders is a central part of the Jesuit team.  Coach DeLong believed that “different guys came alive as leaders during different games,” but he hopes that “everyone is able to provide an emotional basis for the team, so that we don’t have to always rely on one guy to carry the team.”  Miller agreed, commenting, “every single [senior] contributes in his own way to contributing to the team’s cohesiveness.”  This year’s seniors are Ben Sloan 15’, Jacob Su 15’, Collin Stack 15’, Collin Buechel 15’, Juan Ramirez 15’, William Feist 15’, and Phillip Eudy 15’.

Miller believes that the team “has started the season kind of slow, but has had quality practices over the last couple of weeks, which has shown in recent games,” and expects “to keep the winning going.”  Upcoming home games include Skyline on February 24 and W.T. White on March 6.  If you love the beautiful game, be sure to come out and support your Rangers as they close in on the playoffs and end the season strong.