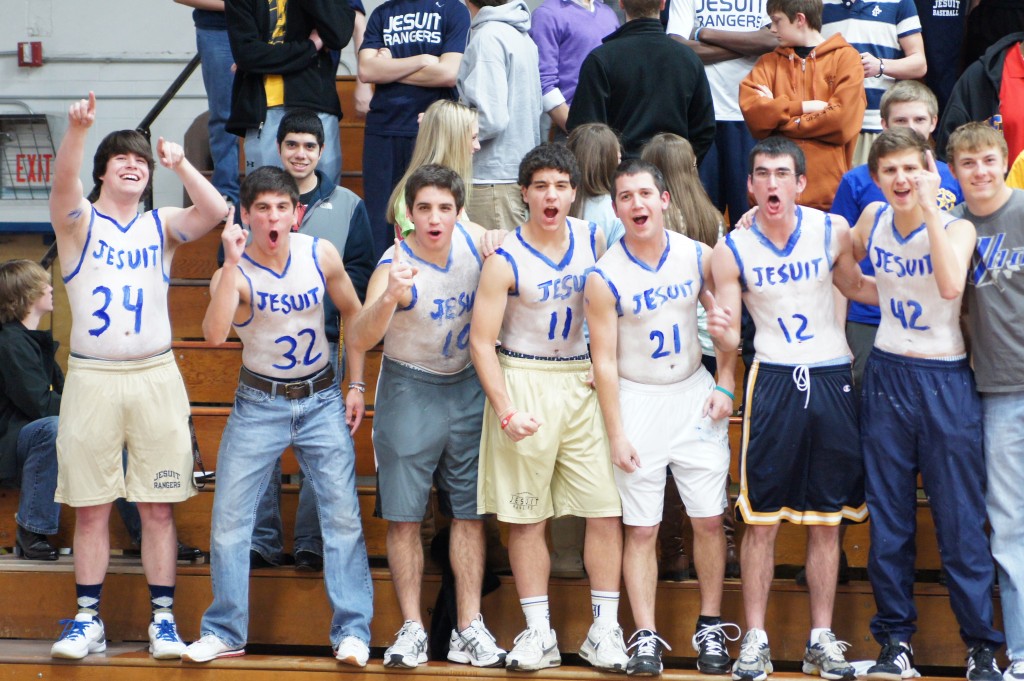 The week of January 31, 2011, had a normal two district games scheduled for the Rangers but both Tuesday and Friday nights’ matchups were postponed due to the ice storm that hit Dallas that week. Needing to make up the games, the district rescheduled the games for Monday and Wednesday of the next week. 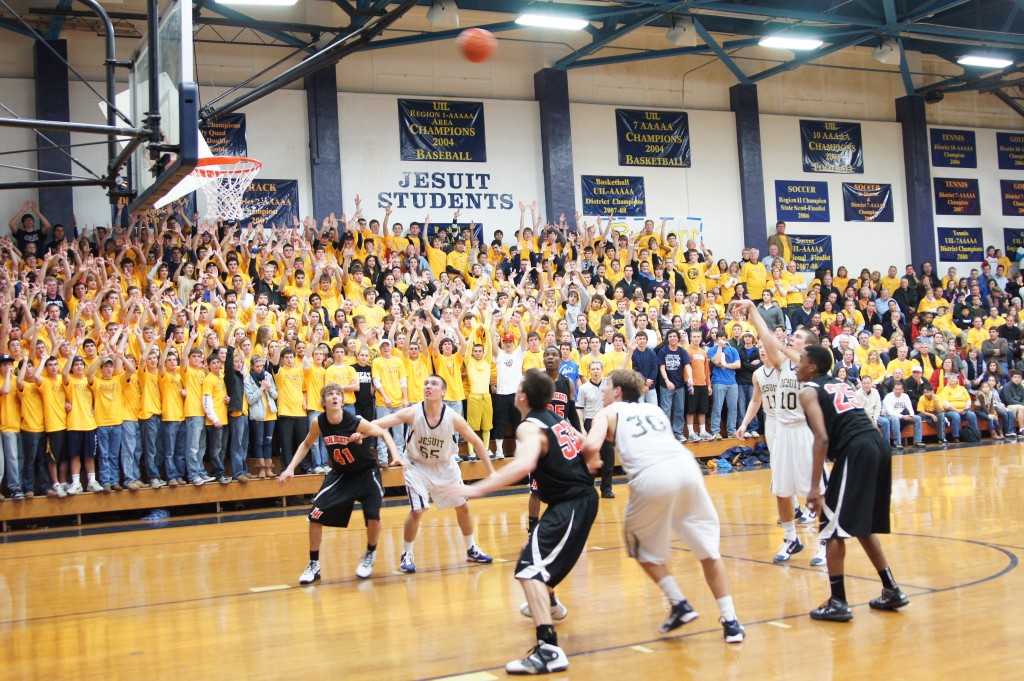 Monday, February 7th’s makeup was against Skyline, who barely escaped Jesuit the first round through district with a 46-49 win in Forester Field House. The Rangers were eager to show that Skyline would be no match for them this time around. It was a slow start for Jesuit as the Raiders hit 3 three-pointers on their way to a 14-point first quarter; the Rangers had just 8. The boys came back with a stronger second quarter though, outscoring the Raiders and going into halftime down just 22-19. The Rangers kept chipping away in the third quarter as sophomore Steven 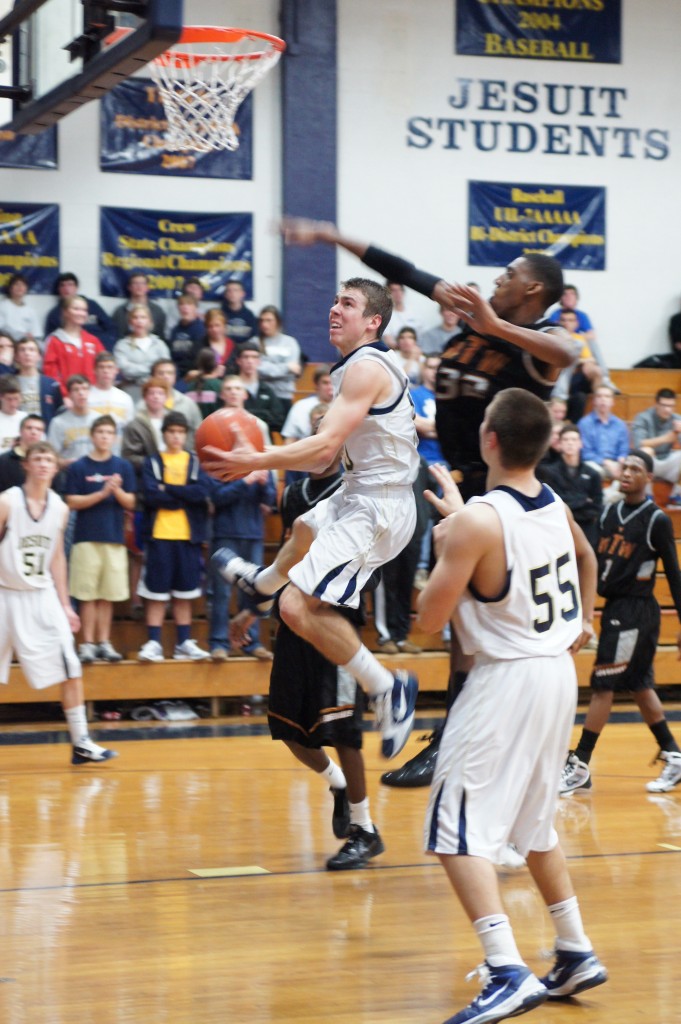 Spieth scored five more points to reach his game-high total of 14 points at the end of the third quarter. The fourth quarter began with the Rangers down two, but an explosion of buckets for the Rangers ensued. Scoring 24 points to the Raiders’ 10, Jesuit crushed Skyline in the fourth quarter and ended the game on fire, winning 53-43. Senior point guard Brian Wetzel had 8 of his 12 points in the fourth quarter, including five out of six clutch free throws to seal the game. Junior post David Lacey also had a breakout quarter scoring all 8 of his points in the fourth. Spieth ended the game with a double-double, adding 12 rebounds to his game-high 14 points. 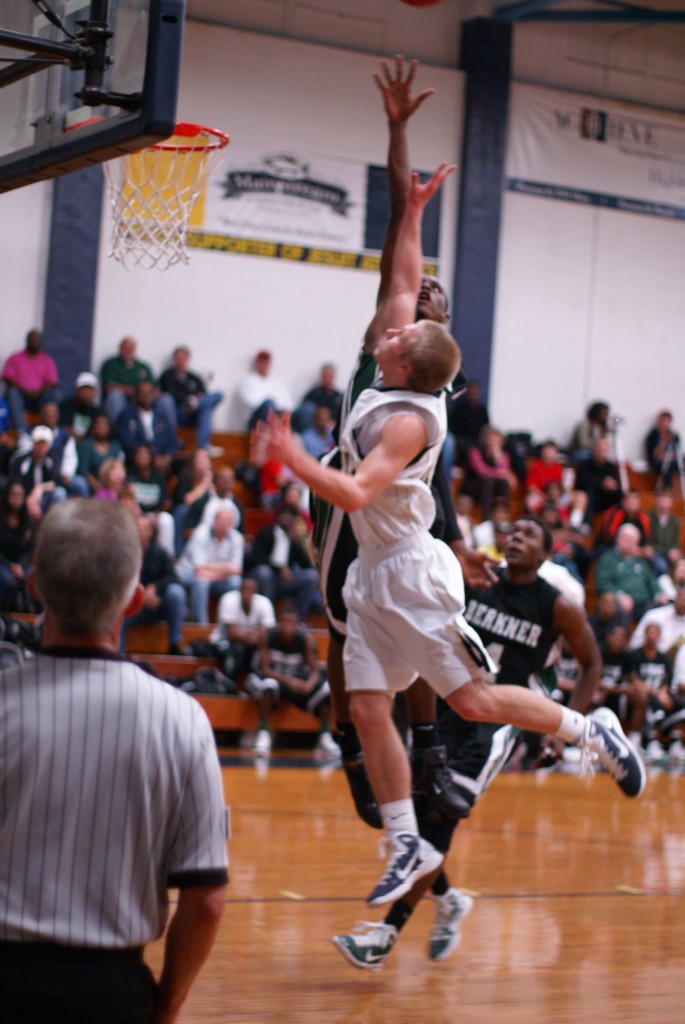 Tuesday’s game was the week’s normally scheduled game against Lake Highlands. The fans showed well at the Lake Highlands gym to see if the Rangers could grab the district sweep against the Wildcats. It was a close game that came down to the wire, but the Rangers started hot with a 14-3 first quarter in which five different players scored. Spieth started right where he left off the night before, scoring 5 of the team’s 14 points in the first. An explosive second quarter for Lake Highlands, though, found the Rangers tied at 23 going into the locker rooms at half. It was a fun third quarter to watch as both teams were firing on all cylinders, with 6 three-pointers combined from the two squads. But, Jesuit edged the Cats 22-20 with Lacey scoring 6, and Wetzel and Spieth both adding 5 of their own. 7 out of 8 clutch free throws from Lacey and Spieth combined sealed the deal for the Rangers as they outscored Lake Highlands, 16-14 in the fourth, making the final a 61-57 victory that would have tremendous impact on seeding at the end of district 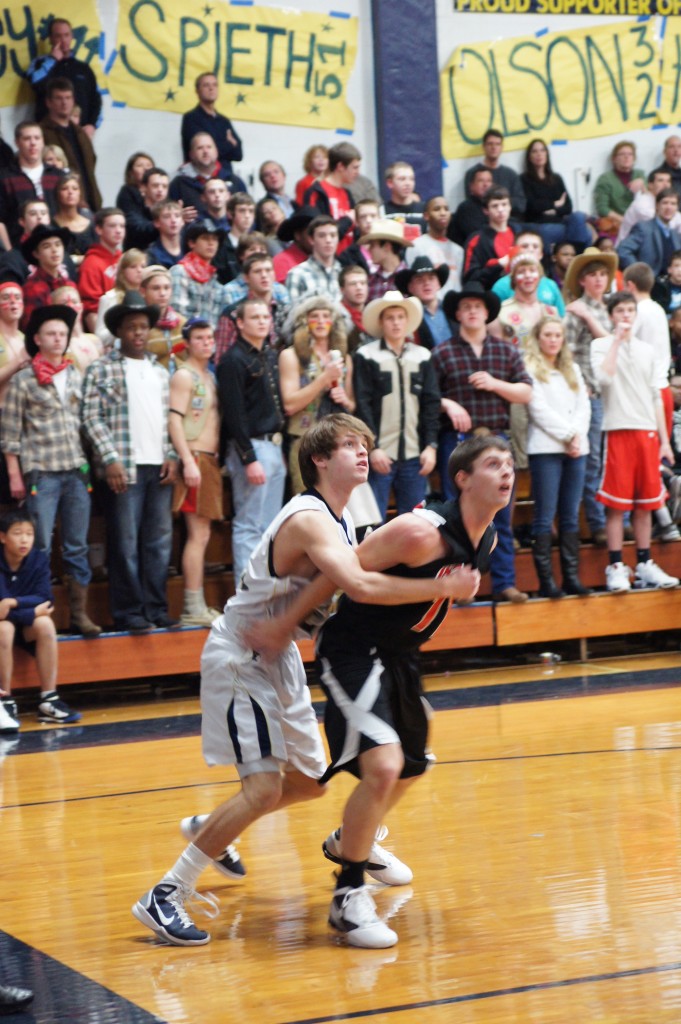 play. The Wildcats had two scorers with 24 and 14, but they proved no match for the spread out scoring for the Rangers. Spieth again led the way for Jesuit, scoring 17 and adding 5 rebounds and 3 steals to his stat line. Lacey chipped in a double-double, with 15 points and 10 boards of his own.

Wednesday’s schedule originally featured a make-up game against Richardson High School, but the fifth snow day in two weeks pushed that contest to Thursday night. The Eagles were coming off their biggest win of the season, beating Richardson Berkner who was undefeated in district until then. The Rangers were eager to prove that their win over Berkner was not a fluke and clinched another 2-0 district sweep. Even though it was the third game of the week, the Rangers found no lack for energy as they shot lights out for the entire game. It was a 21-6 first quarter in favor of Jesuit as senior leader Brian Wetzel scored 11 of his game-high 22 points in the first. The Eagles shot it better though 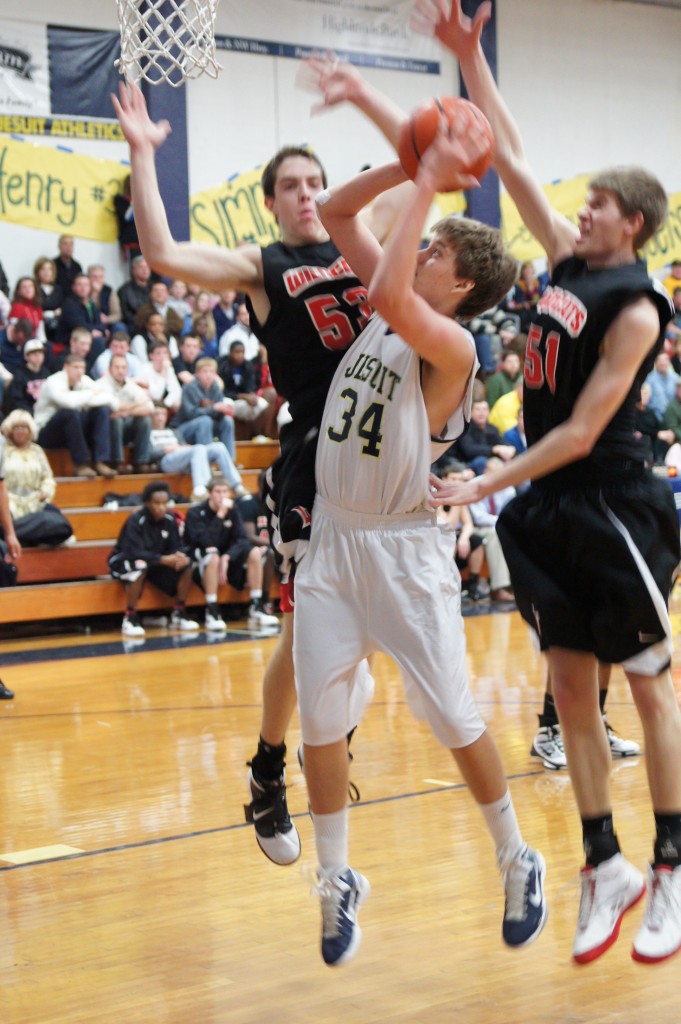 in the second quarter, outscoring the Rangers 21-19, even with four Jesuit three-pointers; however, the lead was still 40-27 for the Rangers at half. It was another high-scoring quarter in the third, with Jesuit clicking on all cylinders once again scoring 22 to the Eagles’ 19. The dynamic duo of Wetzel and senior guard Jeff Schoettmer combined for 16 points, almost as many as the entire Richardson squad.  Nothing slowed in the fourth as the Rangers kept a steady lead, scoring their highest point total in a quarter, 23. The final was a high-scoring 85-67 blowout in favor of the Rangers. Torrence Carr of the Eagles went for 19 points, hitting all 6 of his free throws, but it was no match for Brian Wetzel who had 22 points, including 2 three-pointers, to go along with 5 assists and just 1 turnover. Jesuit had four other scorers in double-digits, including junior Reid Leinbaugh, 14, Schoettmer, 13, Lacey 12, and Spieth, 10. Left to play only the two worst teams in the district, the Rangers seemed to be peaking at the absolute perfect time heading into the playoffs. 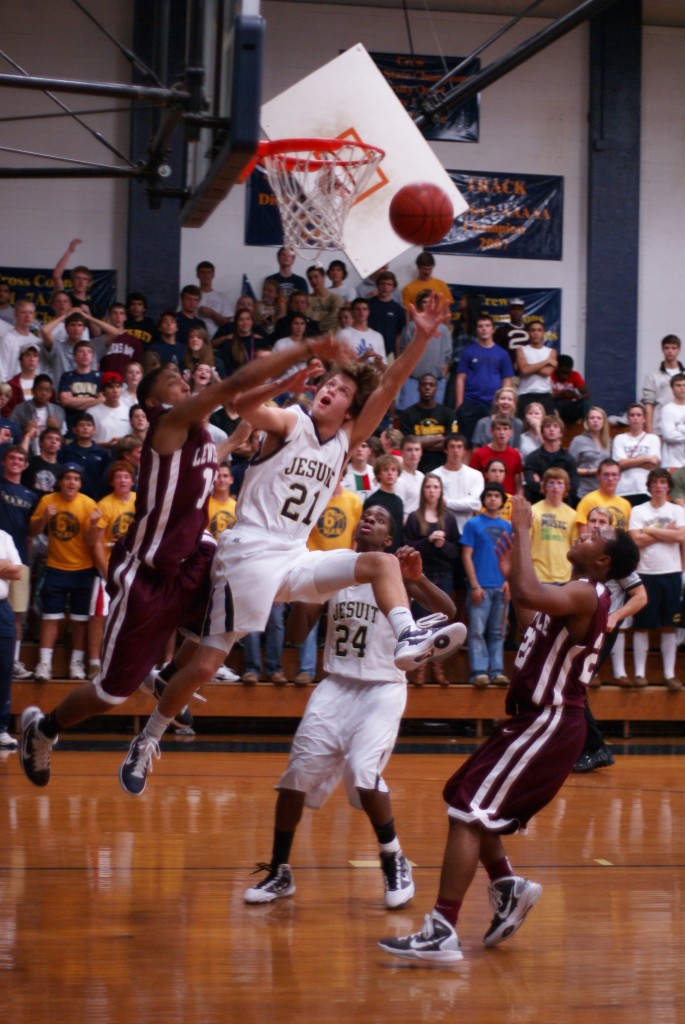 That next night, Friday, February 11th, was senior night as the Rangers hosted Samuell High School. A fun introduction of senior cheerleaders, managers, and players started off the game in the right way as the Rangers came out firing once again, hitting 4 three-pointers, including 2 from Jeff Schoettmer, and scoring 23 points to the Spartans’ 13. Schoettmer had 9 points of his 13 in the first, with senior post Connor Henry chipping in 6 first quarter points coming off an injury from earlier in the season. The rest of the game was no different as the Rangers had their way with Samuell, holding them to just 2 points in both the second and fourth quarters on their way to a 70-25 victory in front of the large crowd. Henry ended the game with 10 rebounds to add to his game-high total of 19 points, shooting 70% from the floor. It was an all-around impressive game for the Rangers who had every player score in the game.

The last game of district was the next Tuesday, February 15th, as the Rangers faced off against Sunset High School, looking to get its fifth district sweep. Like Samuell, the Bison were no match for the high-powered Rangers offense. Jesuit had a 20 point first quarter that featured 2 three-pointers from both Leinbaugh and Spieth. The Rangers still outscored the Bison in every quarter, despite decreasing in points each time. The final was an easy 58-26 victory over Sunset, in which no Ranger scored over 8 points. This was the end of the district season as the Rangers finished behind only Richardson Berkner, clinching the second seed and a good spot in the playoffs. 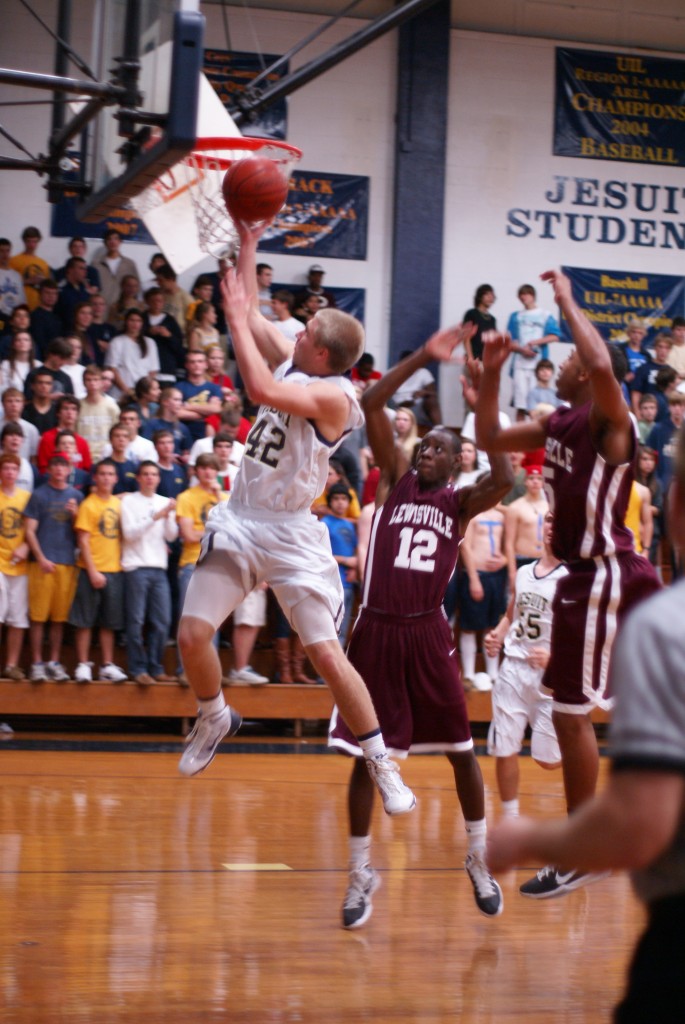 The first round of the playoffs began on Tuesday night, February 22nd, at Wylie High School. On the other end of the court was South Garland High School. The entire first half was low-scoring, defense oriented basketball that ended in a 19-19 tie as the teams headed into the locker rooms at halftime. Something quick for the Rangers during the break, however, as they broke out in the third quarter, scoring 22 and hold the Colonels to just 10 points. The scoring was led by none other than seniors Schoettmer and Wetzel, who had 6 and 4 points respectively, as much as the entire South Garland team in the quarter. The Colonels picked it up a bit in the fourth, but the Rangers didn’t slow down either as a 20-17 quarter in favor of Jesuit paved the way for a 61-46 victory. A stout defensive game and a 42-point second half had the Rangers cruising into the second round of the playoffs. Schoettmer led all scorers with 15 points and added 6 assists to lead the Rangers to their 15 point win. Lacey also added 13 points and 7 rebounds. The team had 4 blocks, including a monstrous swat from senior guard Blake Vierling, and 8 steals that contributed to many fast-break points as the Rangers marched to victory.

That Friday, the 25th, had the Harker Heights Knights from Killeen, Texas, on tap, ranked 14th in the state. The Rangers actually faced off once before with the Knights earlier in the season on December 12th in the Flower Mound Tournament. With Wetzel still nursing his ankle injury from football, the Knights walked away with a 44-38 win. This time the teams would meet in Waco, Texas, where Jesuit would hope to avenge its earlier loss and advance into the third round of the playoffs. A hot start for the Rangers pushed them to an early lead of 15-5 in the first, which ended 18-11 in Jesuit’s favor. The second quarter flipped the scoring for both teams as the Rangers slowed down and Harker Heights hit 3 three-pointers to end the half tied at 29. The next quarter could very well have been the best quarter of basketball that the Rangers had seen all season. The Knights came out shooting lights out as they hit four from beyond the arc on CONSECUTIVE POSSESIONS! The scoring rally put the Rangers in a hole that ended with the Knights up 56-40 at the end of the third. Jesuit gathered their confidence at the break, though, and came out aggressively to dig out of the hole. The deficit from the third, as well as the Knights sinking 18 out of 21 fourth quarter free throws, proved to be too much for the Rangers as they ended the season with an 86-67 loss to Harker Heights. Lacey led the scoring for the Rangers with 18 points. Seniors Wetzel and Schoettmer ended their Jesuit basketball careers in tremendous fashion with 17 and 14 points respectively. Vierling also added 7 points and 5 rebounds, while the bright future of this Jesuit team sophomore Steven Spieth ended his first varsity season with 7 points and 8 rebounds. It was a solemn bus ride home from Waco as the Rangers ended their season.

Jesuit finished with an overall record of 18-15, with an 11-3 record in district 9-5A. After starting the season 7-13, this team finally clicked, ending the season on an 11-2 run, including its loss to end the season against Harker Heights. There was nothing but love and support for this team as they made their way into school the next Monday. At the basketball banquet on Sunday, March 6, 2011, Head Coach Chris Hill had this to say to wrap up this season: “I know it was a rough start, but in my mind, this team overachieved greatly. I told you boys all year long that we were going to be really good, and by the end of the season we were playing some great basketball. I’m every bit as proud of this team as any team I’ve ever coached because of how hard you boys worked and how much you had to overcome.” The feeling was mutual all around as the players and coaches congratulated each other on a fun and exciting season. The seniors will be missed, but the future looks bright for Jesuit Ranger Varsity Basketball who will return 5 varsity members from this season and have a stock of JV players who went 22-6 on their season, including a 10-game winning streak to close it out. That’s it for this season. So long, and we’ll see you next fall.