More
JesuitRoundup.org is brought to you by:
Home Sports Lacrosse Jesuit Lacrosse Travels to North Carolina 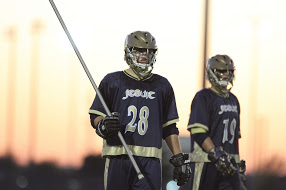 This past Spring Break, the Jesuit lacrosse team ventured to the state of North Carolina to compete in one of the most illustrious tournaments in the country, the Brine King of Spring Faceoff Classic. Taking on the traditional power of St. Ann’s Belfield from Virginia, Memphis University School, and Broughton High School from North Carolina, Jesuit sought to improve on executing offensively and come together as a cohesive unit in preparation for their campaign toward the State Championship.

The Jesuit varsity first faced off against St. Ann’s Belfield in what would become “one of the biggest wins in Jesuit lacrosse history.” The game began with the teams trading goals, St. Ann’s all future Division 1 attack versus Jesuit’s seasoned veterans. Jesuit fought hard to fend off the offense of St. Ann’s, but perhaps too hard, committing ten penalties.

Though the mistakes Jesuit committed were detrimental, the defense was well prepared to take on the task of defending a man down, not allowing a single goal during the penalties. “It was close the whole time. We basically traded goals until the fourth quarter where it was four to four,” said senior attackman Jason Myers.

Then, as the game entered its finals minutes, after a stoppage of play, John Michael Priddy ’16 took the ball, ran down the field, and immediately scored what would have been the go-ahead goal, “but they ended up reviewing the goal, which was pretty controversial; “I had never seen it done before,” said defenseman Hayden Clouse ’14. Eventually the referees decided to take the goal off the scoreboard, citing the fact that Priddy started before the referees blew the whistle to continue play. That prompted what would be a dramatic turn of events.

Coming out of the stoppage that took place while the referees reviewed the play, Jesuit set up to get one last shot off in the few seconds that remained. The plan was to get the ball to senior and Lehigh commit Lee Belland. After Belland gained possession, he attempted to dodge for an open shot, but St. Ann’s defense held the lines. The ball was then distributed to Myers at the left wing, who proceeded to make his way to the right center of the field. “I looked up at the clock and there was six seconds left. I knew I just had to go to the goal and make something happen, because I [knew] if I missed we would [have gone] into over time anyways,” Myers described.

Seeing the clock tick down, Myers stepped into a shot and placed the ball perfectly in the top corner of the goal. The goal was thrilling, but in the excitement, one of the referees believed he heard one of Jesuit defensemen lose their composure. The referee, who was standing on the offensive end of the field, claimed to have heard, during the celebration, a Jesuit defensemen use explicit language, and issued a penalty. Due to the penalty, with no face off, St. Ann’s Belfield started with the ball and Jesuit was a man down, yet again, with single digit seconds left in the game. But the Jesuit defense that had held off the St. Ann’s offense all game, pulled together for one final stand. St. Ann’s took the ball and began play, only to be checked by a Jesuit defender and the ball rolled along the ground as the clock finally hit zero. Jesuit had won.

Jesuit then took on Memphis University School. “After we won the first game in such a dramatic fashion with a game winning goal, the next game we were a little complacent and [did not] come out with same type of energy,” commented Myers. Jesuit came into the game sluggish, after coming down from the emotional high induced by their game against St. Ann’s Belfield. Just as they did in their previous game, Jesuit traded goals with their opponent, holding a 5 – 4 lead at one point, but they could never find their rhythm. Clouse commented that “you could tell that we were gassed … the defense gave up a bunch of stupid goals. There were multiple times when they spread us out and we didn’t communicate enough.” The tournament shed some light on what the team needed to improve on, according to Myers, such as effectively moving the ball: “We couldn’t move the ball around. We were not passing and catching. We just played a really bad game.” The game ended with the score of 6 – 7, with Jesuit losing, and left the team with a bitter taste in its mouth. “That is a game we want back,” said Clouse.

Then came the game against Broughton High School from North Carolina. Broughton maintains a quality lacrosse program in North Carolina, worthy of respect. Even so, due to the Jesuit varsity fiercely competing in two close games early on, being rich in lacrosse talent, and traveling with their second and third string teams, Head Coach Chris Surran chose to start the second team, that is until Broughton made a bold move mid-way through the second quarter. To hear Myers tell it, “Some of the kids who didn’t get to play too much the first two games started.

Then the other team called an equipment check on us, because they saw the fingers of [one of Jesuit’s players gloves] were cut out, [which is illegal]. But it is also not good lacrosse etiquette to call an equipment check in [a exhibition] game.” The move by their opponent irritated Coach Surran, causing him to call out “Ones all around!” After the first string entered the game, Jesuit scored 6 straight goals, and by the time they exited the game in the third quarter, the score shifted from 3 – 1 to 11 – 2. The game ended with The Rangers winning 16 – 4. The victory may appear to have little value to the team, but according to Myers the win was “a really good way to get back the confidence we had before” the loss, allowing Jesuit to go back to Dallas with the mojo they left with.

The trip to North Carolina seemed to consist of nothing but positives for the Jesuit Rangers, though it may not appear that way on the record sheet. The team bagged a monumental win for the program against St. Ann’s Belfield, were humbled and proven to be mortal by Memphis University School, and regained championship level poise they are known for, which are all pertinent in achieving their goals for the season.

One of the lacrosse team’s short term goals is to win all their district games, so they can be a first seed in the post season tournament and receive a bye and eventually reach their ultimate goal, winning state. “That’s been our goal the whole year, to win state. I think we can, but we just have to continue the momentum. In past years, we have peaked really early and been playing our best near the middle of the season and have gone downhill as the playoffs came. But this year, I think it is a little different, because we are definitely not playing our best right now, so we can only go up from where we are,” observed Myers.

It is hard to disagree with Myers. The team put on quite the show at the Brine King of Spring Faceoff Classic and is poised for a remarkable season.