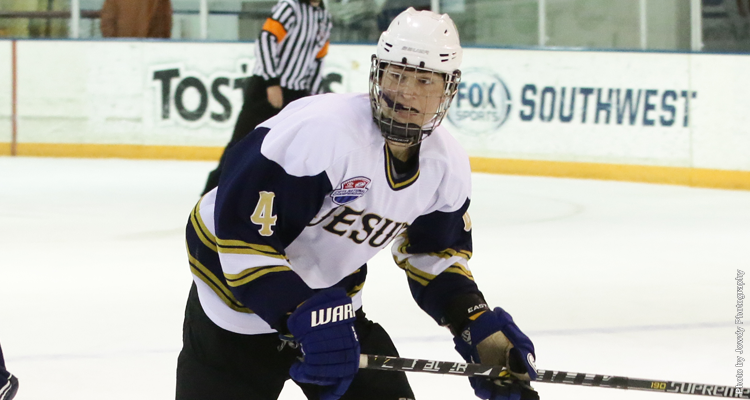 The puck drops, crashing against the ground, sending shards of ice flying through the frosty air.  The hockey player raises his stick, wielding it with strength and prowess.  He sends the small black puck sailing through the air right into the back of the net, exhilarated by the victory.  This feeling of triumph and glory flows through the air, as the team cheers for their accomplishment.

Over the months of January and February, the Jesuit Varsity Hockey team has been busy, playing 9 games and facing off against competitive teams such as Southlake Carroll, Allen, and Coppell.

In their first game back since playing Plano West, the Rangers took on Keller high school on January 5th and came up short in a high-paced offensive matchup, with a final score of 3-5.  Following a tough loss, the Varsity Hockey squad came back big on the 19th and walloped Southlake Carroll with a final score 5-2.  Though they were coming off a big win against the Dragons, Jesuit sadly lost a heartbreaker against a resilient Allen team on January 24th, the final score a very close 1-2.

The Rangers looked to strongly close out January against Denton County and Southlake Carroll, the two games just days apart.  First, they took on Denton County, a team that finished the season 8-10 but had been playing well coming into their matchup against the Rangers, winning 3 of 4 before the game.  Jesuit’s Varsity hockey squad fell to a red-hot Denton County team, losing the game 0-4.  Next, Jesuit hockey took on Southlake Carroll, a team the Rangers had dominated earlier in the season. However, the end result would not mirror that of their earlier matchup against the Dragons, as Southlake would go on to win 3-0. From the very beginning, Southlake came out with an unmatched intensity, scoring two of their three goals in the first period.

After 2 convincing wins by the Rangers to close out February, Jesuit desperately needed a win in the standings to keep their postseason aspirations alive.  On March 2nd, the Jesuit Varsity hockey battled against the Coppell Cowboys and used a comeback to force overtime. Unfortunately the Rangers fell in the shootout, 4-3.  Despite the loss, Jesuit clinched the final playoff spot in the AT&T Metroplex Hockey League City Championship Tournament.  Anthony Calabrese ‘18 thought that the Coppell game “was one of the best games we’ve had all season. We put up a great fight against one of the best teams in the state. I couldn’t be happier the way we closed out the season, acquiring a playoff spot. We definitely turned things around the last few games.”

The Rangers’ playoff game will be on Monday, March 20th, against Mckinney at 6:30 pm. The game will be played at the Dr. Pepper StarCenter in Farmers Branch.  Be sure to go out and support your Rangers!