More
JesuitRoundup.org is brought to you by:
Home Sports Jesuit Fencing on the Rise 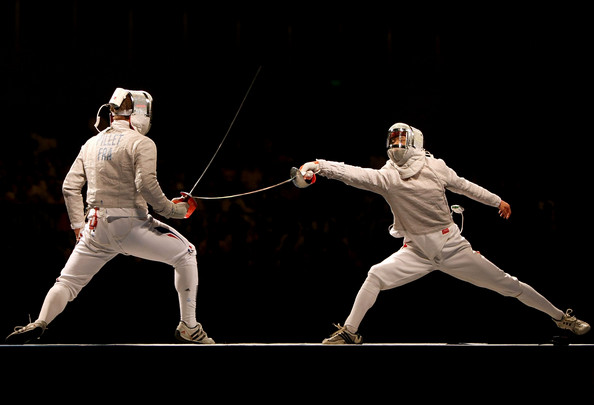 When people think of extracurricular activities, fencing is not the first thing that comes to mind and at most schools it is not even an option; however the Jesuit athletic program allows students the rare and unique opportunity to participate in school-organized fencing.

In response to the sport’s rising popularity, Jesuit founded the fencing team and hired the experienced coach Mohamed Elsakhawy in 2004.  Since then fencing has proven to be one of the most difficult sports at Jesuit, hosting practice four days per week- Mondays through Thursdays- from the end of school until five o’clock.

Separate from the UIL, the Jesuit fencing team competes through the United States Fencing Association (USFA), which matches them up with opponents from a variety of schools. In recent history, many Jesuit fencers have found success in their individual matches and advanced considerably in USFA tournaments.

Often times, the appearance of fencing equipment reinforces the misconception of physical danger simply because the saber resembles a sword used for combat. Yet, in reality this object poses no real threat on account of strictly enforced safety precautions. Each saber is equipped with a secure rubber stopper, and all fencing participants must wear a protective uniform made of Kevlar, the same material found in bulletproof vests.

Coach Elsakhawy reveals that, throughout his entire fencing career, he has “not seen any irregular injury, not a concussion, broken bone, or cut from the saber.”  Likewise, fencer Michael Artigues ‘13 mentioned that “you can get bruises, but nothing serious.” Fencing actually provides a safer environment than many of the leading contact sports.

While Jesuit fencing develops athletic coordination and provides physical exercise, it also stimulates mental activity in that it requires constant intellectual thought and logic. Coach Elsakhawy stresses that “fencing is a chess game because you have to be smart and athletic at the same time.”

As participants strive to improve their abilities in the sport, they greatly enhance their mental aptitude. Artigues supports the sport’s intellectual benefits, claiming that he has experienced “an increase in mental sharpness and faster reflexes.”

Each year, the fencing team generally receives an average of fifteen new participants, most of whom come from the freshman class. According to Coach Elsakhawy, the majority of newcomers “know nothing about fencing when they start” and lack even a basic level of experience. In Han Hong ‘14 related to this situation when he stated that, “as a freshman, fencing just seemed interesting so I decided to try it out,” even though he understood very little about the sport.  As a result of this unfamiliarity, about half of incoming athletes return the following year, wishing to progress in the sport and take full advantage of its benefits.

Although fencers compete in individual matches, the program promotes camaraderie and brotherhood and leads team members to support one another in all aspects of Jesuit life. Coach Elsakhawy classifies fencing as a team sport in that “you need to have others around you in order to fence and improve yourself.”  Through this constant push to excel, athletes continue to uphold the value of sportsmanship, strengthening the bond between teammates and contributing to the ideal of Jesuit brotherhood.