More
JesuitRoundup.org is brought to you by:
Home Sports Basketball Jesuit Ends Season Hot, but Loses in 1st Round 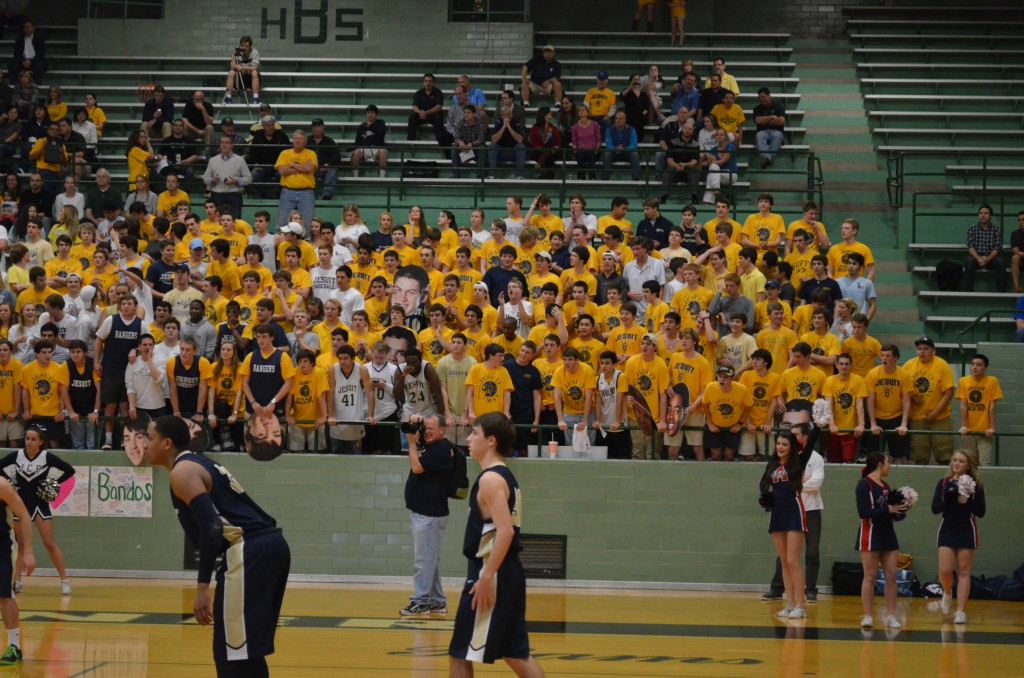 As Michael McReynolds ’15 dribbles the ball down the court, he looks around for his teammates, then decides to take the layup himself. He provides a clutch bucket to bring The Saddle back to Jesuit.

Despite the loss to Berkner, the Jesuit basketball team held strong by winning five straight games to enter the state playoffs as the district’s number two seed. In the playoffs, Jesuit played Allen and lost, ending any potential playoff run.

The first game following the loss was against neighboring rival W.T White. This was a key road test and the team needed to show mental toughness. In the beginning, it was an even game, with the teams shooting tick for tack. At the end of the first half, the Rangers were trailing, but they found some life in the third quarter and held on to win 58-51. The second half run was aided by the play of Junior Peter Lynch who had 10 points as well as Senior Brocke Stepteau who had 15. In the final minute, Junior Michael McReynolds had a game high of 16 points and hit two critical baskets in the dying minutes to seal the win.

In the second and third games, Jesuit played Lake Highlands at home and then JJ Pearce on the road. The Lake Highlands game was a very good game for Jesuit. They hit their shots and played very intense defense. They went on to win very easily 58-35. Then, they played JJ Pearce, a team fueled by its earlier loss at the buzzer. They were in high spirits looking to end Jesuit’s hot streak. However, they were unsuccessful and lost due to a final effort by Jesuit to close out the game 43- 36.

On Senior Night, before the game started, everyone in attendance honored Seniors Matthew Bender, Michael Bejarano, Brocke Stepteau, and Christian Koeijmans. The fans congratulated and honored them for their hard work and dedication throughout their four seasons playing Jesuit basketball. During the game, Jesuit started out well, but they really showed their skill in the third quarter. In this period, they went on a 19-0 run, closing out the last home game for the seniors 52-37.

In the final game of the season, and probably the most important, they played Richardson on the road to determine district seeding. One of the keys to the game was the ability to rebound against this very aggressive Richardson team. Matthew Bender set the tone by grabbing multiple rebounds, ending with an outstanding 14. Moreover, Michael McReynolds played one of his best games of the season, scoring 18 points, which included two big three pointers. Peter Lynch and Brocke Stepteau also stepped it up, contributing double digit point totals. All of the team members contributed in this key game, a 64-58 win. This victory and the ability to win 10 out of the last 11 games caused a three way tie in the district. This tie gave Jesuit (15-12) their first district title since 2009.

Jesuit, one of the hottest teams going into the playoffs, was paired with the athletic Allen Eagles. Going into this game, Coach Hill said that Allen “does a great job of exploiting mismatches,” and that Jesuit needs “to have great focus… every possession on both ends of the floor.” When asked about the X-Factor of the game, he spoke defiantly, saying that “rebounding well at both ends” will determine the end result.

With other game plans in mind, they went into the game with confidence, knowing that they had a decent chance to beat Allen. However, Jesuit started the game poorly, missing shots and making simple technical errors such as stepping out of bounds and not boxing out. They were down by double digits early and made a valiant effort to get back into the game. They dwindled the lead to 9 but could not make a big comeback run. They missed some open layups and did not rebound well at all.

After halftime, the score was Allen 36 and Jesuit 22. In the third quarter and beginning of the fourth, Allen turned up the heat, looking to finish out the game. Allen’s athleticism and post play proved too much for Jesuit to handle. Allen moved well in transition, dunking and tossing up alley-ops. Jesuit shifted to desperation mode by shooting a myriad of threes. Nevertheless, Jesuit could not complete a miraculous comeback unfortunately, losing in the first round 70-47.

The loss was devastating not only to the team, but also to the Jesuit fan. However, the beauty of any sport is that there is always a next year.