Photography and video by The Last Roundup and Silas Hartman ’20, Media Editor

Looking to pick up their first win of the season, the Rangers took on the DeSoto Eagles at home Friday night in a highly anticipated match up. Led by quarterback Rance Holman ’20, the Rangers struggled to find the end zone early on but finished out the first half strong, scoring a pair of touchdowns to end the 1st half. Despite some promising drives and a few costly turnovers, the Rangers fell to the Eagles at a score of 27-55.

Despite scoring just 3 points in the 1st quarter, the Rangers quickly rallied behind quarterback Rance Holman ’20 to finish off the half. Coming off a DeSoto touchdown to start the second quarter, the Rangers put together an impressive drive taking it 67 yards within just 4 plays. Receiver Kyle Heckel ’21 capped off the drive with a momentum-shifting 16-yard touchdown drive. Attempting to put the Rangers on the board, Linebacker Mitchell Campbell 20′ recorded the team’s longest field goal since 2015, kicking a 48-yard bomb from the center hash.

Some offensive standouts: Receiver Jonathan Paredes ’20 accounted for 7 receptions at 123 yards and a touchdown. Receiver Kyle Heckel ’21 also had himself a day, accounting for over 100 yards of total offense, with a pair of touchdowns, one on the ground and in the air.

Although the Rangers produced some timely stops early in the 1st, the Eagles’ offense quickly scored 4 touchdowns in the 2nd quarter, breaking them away from the Rangers. Looking to capitalize after the 1st half, the Ranger defense got a crucial turnover, as defensive back Cooper Manning ’21 got his 2nd interception of the season early in the 3rd quarter. Despite the momentum-shifting interception, the Eagles offense proved to be too much as they finished with a score of 55-27.

Some defensive standouts: Linebacker Tommy Roy ’20 put together an impressive 12 tackles, including 3 tackles for loss and a sack. Weakside linebacker Jack Barton ’20 had himself another excellent game, securing 9 stops. 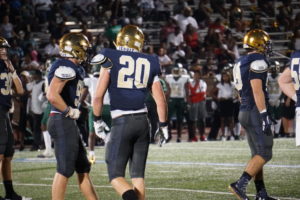 Linebacker Tommy Roy ’20 believes the Rangers “put together some impressive stops” that they can “build off of for the next game.”

Receiver Kyle Heckel ’21 thought the offense “showed signs of dominance,” but “there are still things [they] need to work on before [their] next match up.”

This Friday, the Rangers look to capture their first win of the season as they travel to Wylie ISD Stadium to take on the Wylie Pirates at 7 p.m.