More
JesuitRoundup.org is brought to you by:
Home News Clubs & Activities Jesuit Debate Starts Off Running 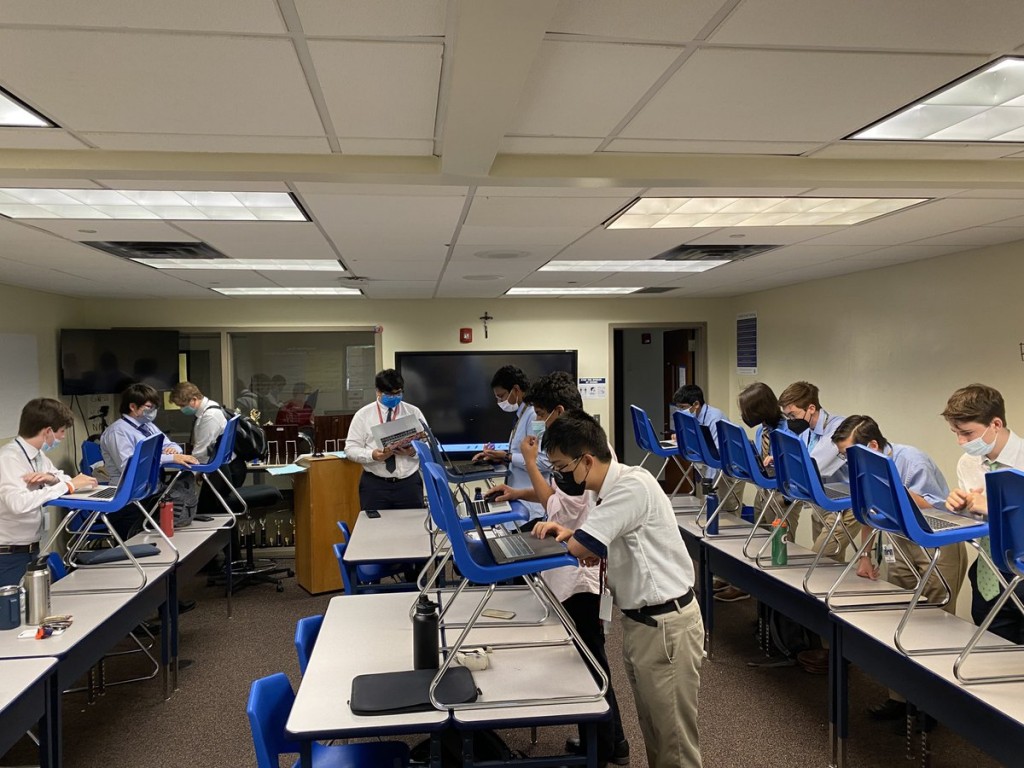 “Contention 1: Is the Status Quo.” A familiar phrase to every survivor of freshmen Rhetorics and Civics, but also the mark of the 1ac in the sport of policy debate.

The second week of September marked the first national tournament of the Debate season. Teams from over 12 states and two countries “travel” to compete at the Grapevine tournament for a weekend of competition and fun. Jesuit sent a total of 5 teams, 2 in the Varsity and 3 in the JV divisions.

Jesuit, reaching the elimination rounds in both divisions, shows great promise for the rest of the season.

The Senior-Junior duo of Aarin Jain ‘22 and Tejas Murugesh ‘23 definitely had a fun weekend. After going 3-2 in the pre-elimination rounds, Jesuit JAMUN broke to the Double Octofinals where they lost a tough 2-1 decision to Westside Highschool in Houston.

Tejas Murugesh commented, “Grapevine was an amazing first tournament. With the water topic for this year, the span of arguments I could run made it quite enjoyable,” a claim that his partner Aarin Jain can also agree with.

Additionally, after the tournament, he further says “I could definitely say it was an overall success because I was able to discuss with my partner about ways we can move forward. Plus, I am now able to prepare answers to rival schools! Grapevine was definitely an absolutely fantastic experience.”

The other Varsity team of Dominic Chacko ‘23 and Lawrence Jin ‘23 went 2-3 in the prelims. They lost a close debate to Niles West in Illinois keeping them from the elimination rounds. Still, both partners enjoyed the experience a lot and got the chance to shake any leftover rust from the summer.

Overall, both teams in the varsity division had a great run and look forward to gaining further success at their next tournament.

The sophomore duo Caden Cutchall ‘24 and Kyle Ma ‘24 went 4-1 in the preliminary rounds reaching the semi-finals of their division. This marks the furthest any Jesuit debater has reached in this division. Losing a tough 2-1 decision to Coppell, Jesuit CM was eliminated for an overall 3rd place finish.

Kyle Ma commented, “as Grapevine was the first tournament of the season, we did not know all of the arguments we would be up against and, it had been a while since we competed; so, while I was excited to kick off the season, I was also feeling pretty nervous. However, once the tournament started and everyone found their rhythm, the nerves went away. Everyone on the debate team is so helpful and insightful that if I ever had a question before or after a round I could ask it and get an invaluable answer.”

Another sophomore duo of Brandon Gibson ‘24 and Peter Loh ‘24 also broke after going 3-2 in the preliminary rounds. Unfortunately, they lost on a 3-0 to another Coppell team, creating a rival for the team. Nevertheless, Jesuit GL persisted to help Jesuit CM prepare for their debates, a testament to the teamwork on the debate team.

Kyle Ma shows a great attitude as he says “[he] can not wait to see where this season takes us, but I know that we all will do great,” a sentiment held by all the debaters on the team.

Stay tuned to The Roundup for more Debate updates!