More
JesuitRoundup.org is brought to you by:
Home Sports Cycling Jesuit Cycling Takes on Austin and College Station

“How many sports are there where a high school coach can race with his teammates and be competitive? I honestly can’t think of any sport other than this one…”
-Andrew Armstrong ‘01

Coaches usually surpass their athletes in skill, experience, strength, and every other way. The fact that Coach Armstrong’s cyclists have risen to his skill level doesn’t reveal weakness on his part, but immense strength and dedication on the parts of his athletes. From March 28th to May 1st, the Jesuit cycling team raced in Austin and College Station, competing against elite, high school, and collegiate racers alike, destroying the competition.

The race weekend kicked off in Austin, when the varsity cyclists raced at the PURE Driveway series on Thursday. There were three criterium races (category 4/5, 3/4, and P/1/2/3 races) and the Jesuit team had racers in each. The events began with the 3/4 race, where Jesuit had a small team of 4 riders: Dalton Walters ‘16, Joseph Duebner ‘16, Jake Wilson ‘16, and Thomas Whitaker ‘17. The 45 minute race followed the Driveway’s 1 mile long “speed loop.” Walters particularly liked this course because it enabled him to “relax” and prepare to unleash his renowned, “monstrous sprint,” as Coach Armstrong calls it. He certainly made his spectacular sprinting specialty evident when he came back from the 25th wheel on the final lap to overtake almost all of the field and score 2nd in the race! Coach Armstrong was “thrilled” to have a Jesuit racer on the podium down in Austin representing the blue and gold. Sharing similar sentiments, Whitaker noted, “I love seeing Dalton really lay down the watts in the sprint. He’s got massive legs and a phenomenal bike; I just love seeing him perform well.” After the 3/4 race, it was time for the 4/5 race, and Jesuit had three riders in the field: Walters, Duebner, Wilson, and an alumnus Bob Ingram ‘86.

After hardly any rest at all, the Jesuit racers performed admirably, with Walters shining particularly bright in his second back-to-back race. Walters managed to out-sprint the field for the second race in a row and earned 2nd yet again! Walters said that he was “really glad to succeed because now I can upgrade to category 3,” because before this, USA Cycling had rejected his upgrade application three times. Then it was time for the P/1/2/3 race which featured 5 Jesuit racers: Thomas Whitaker ‘17, Evan Bausbacher ‘17, Jake Ingram ‘17, Hugo Scala Jr. ‘16, and Coach Andrew Armstrong ‘01. Jesuit’s stacked varsity squad and their coach looked to make some noise in the foreign environment and earn greater recognition for not only Jesuit high school, but also high school cycling as an organization, because it is such a rarity to high schoolers race at such a high level. In the hour long race, the Jesuit racers took turns attacking the field and forcing the announcers to acknowledge their presence. At the end of the race, Bausbacher placed highest among his teammates, earning 12th out of the 117 rider field! Following an extraordinarily successful day of racing, the team took a day of rest on Friday and joined the sub-varsity riders in college station to tackle the next day of racing. 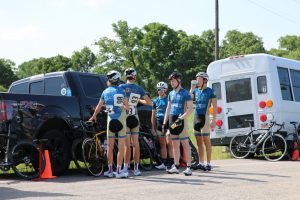 Following a sub-par meal at the Fazoli’s in College Station, the team tackled the circuit race on Saturday morning. Following delays due to the horrendous storm conditions at 7 am, the varsity racers combined with the men’s collegiate A racers (the best racers in college) and showed them their skills. With 6 riders (Whitaker, Scala, Bausbacher, Ingram, Walters, and Wilson), the team looked to shock the college kids with their surprising skills. After Whitaker fell behind the race due to a mechanical malfunction, Walters and Wilson dropped off the back and left a trio of Jesuit riders to fend for themselves. Of the trio, Bausbacher managed to win the field sprint in his pack, placing just outside the top ten, shortly followed by Scala, and then Ingram a ways back. Bausbacher stated that he utilized his secret “second kick” during the sprint, which allowed him to defeat some of the stiffest competition he’s ever faced. Then the JV and novice circuit races were scheduled to start after the varsity wrapped up, but due to a lack of prior proper planning on the Texas A&M event promoters, the sheriff’s department shut down the rest of the races on that course because the event wasn’t cleared by them. 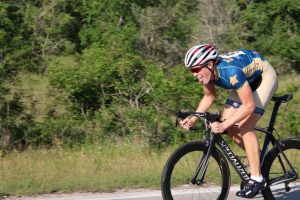 But luckily, there were individual and team time trials that afternoon on a different course, which was cleared with the sheriff. Jesuit entered one varsity and one sub-varsity team into the team category and the varsity team of Scala, Bausbacher, Whitaker, and Ingram earned second among all teams, defeating some of collegiate cycling’s best teams. After those who opted to do the individual time trial wrapped up, the team packed up the trailer, got on the bus, and headed back to their hotel for a well-deserved dinner at Olive Garden and a good night’s rest.

In the morning, the team woke up bright and early to race the criterium on Sunday. With an extra technical course, the whole team lined up for the event. 2 laps into the 30 minute crit, The Roundup’s very own Thomas Whitaker tragically crashed on the tricky double U-turn and slid across the tarmac. Luckily, his was the only crash of the day and all the other riders behind him stayed upright on their bikes. Halfway through the race, Coach Armstrong called out a “doughnut prime,” giving whichever rider crossed the line first a free chocolate doughnut with sprinkles. Walters laid down another sick sprint and won the prime, enjoying his doughnut after the race ended. The race’s finale ended in a similar fashion, with Walters laying down his sprint once again, but he was bested by junior Evan Bausbacher. The podium had Bausbacher on the top, then Walters in second, with Hugo Scala ‘16 coming in third.

After a long weekend of racing and a long season of training, the Jesuit team will now take a well deserved summer break before they start next year with the mountain biking season.

To stay up to date with coverage of the Jesuit cycling team, keep reading the Roundup, the voice of Jesuit since 1942.