More
JesuitRoundup.org is brought to you by:
Home Sports Crew Jesuit Crew’s Fall Season Comes to a Successful Finish

Racing shells barrel down the racecourse, one after another, propelled by crews of dedicated oarsmen. The fall head race for a crew team entails far more than a “beat the crew next to you” racing experience. It is a race against the clock, an all-out internal brawl with one collective objective: pass the crew ahead of you or be passed by the one behind you.

Jesuit Crew has spent the previous two months preparing for and participating in 4 of these head races, a grueling, physically-demanding process requiring serious diligence and effort from every rower.

Head of the Oklahoma

The season’s first regatta, Head of the Oklahoma, took place on October 3rd, where the Rangers lined up for a 4000-meter race against nine other crews. Hours after earning a silver medal in the Men’s Youth 8+ event, the Varsity 8+ rowed in the “Night Sprint,” a 500-meter all-out race. Despite the pouring rain, Jesuit pulled ahead of the other competitors and commanded the field, earning themselves a gold medal. Both the Lightweight 4+ and the Heavyweight 4+ took home a gold in their respective head races, dominating the racecourse for all 4000 meters. Interim Head Coach Mike Morschauser, a former Naval Academy oarsman, also raced in his single, representing the blue and gold well in the Master’s category. 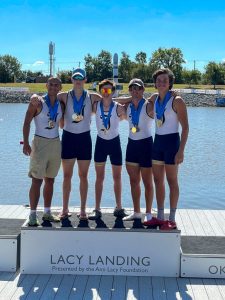 Following their dominant performance at Head of the Oklahoma, the Rangers flew to Boston for the World’s largest regatta, Head of the Charles. Showcasing their skills gained during summer and fall training, Jesuit’s Varsity 8+ placed 28th of 80 crews, well within the top 10 scholastic teams in their event. Jack DeGroote (‘22), Ian Smith (‘23), Landon Cowan (‘23), Rodrigo Aldrey (‘22), Garrett Brown (‘22), Mark Villalba (‘22), Truman Mininger (‘22), and Mason Nothaft (‘22) rowed in the boat coxed by Sebastian Esquivel (‘23). “I couldn’t be happier with the result,” says Head Coach Troy Howell, “that race was gritty and based on this performance, I have no doubts that we will find success in the Spring.” Howell also raced his single in the Men’s Grand Master event, placing an impressive 9th of 123 rowers. The Men’s Youth 4+ placed 75th, 3 seconds ahead of rival Dallas United Crew. John Henry Zolton (‘23), Andrew Putt (‘23), Alex Musico (‘24), and Will Drabik (‘24) raced the 4+ coxed by Pierce Rogers (‘24).

One week after Head of the Charles, the Jesuit oarsmen departed for Austin, Texas, where they raced down the Colorado River. Driven by their success at Head of the Charles, the Varsity 8+ took home a gold medal in the Men’s 8+ event, shattering their competition by nearly an entire minute. A few short hours later, the Varsity 4+ grabbed a gold in the Men’s 4+ event, followed closely by the Second Varsity 4+, who placed 3rd on the podium. 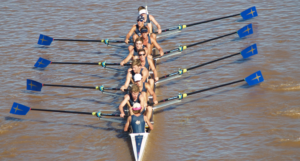 Head of the Hooch

A week later, in Chattanooga, Tennessee, the Rangers took on one last 4500-meter race to cap off their season. The Varsity 8+ found their stride again, placing 10th of 59 crews in the Men’s Youth 8+ event. Jesuit’s Lightweight 4+, manned by Mason Nothaft, Truman Mininger, Landon Cowan, and Will Drabik, also earned success in the Men’s Lightweight 4+ category, placing 2nd of 25 other crews. Coach Howell dominated the Masters 1x category, bringing home a gold medal and dusting the 2nd place finisher by nearly a minute.

To hear his thoughts about the Rangers’ successful fall season, we asked Assistant Coach Eduardo Calderon for his feelings about the team and their performance. “I’m always proud to see how these young men can get down to business at any regatta,” he says, “These guys play hard but work harder, which is something that amazes me about the Crew team. It’s always been filled with jokers, but when it comes down to it, they trust each other inside those boats and give everything they’ve got. I’m very proud when these boys put their all on the line for every race, and I couldn’t be more excited for their future.”

In the face of a turbulent start to their season, which began with the departure of previous Head Coach Randy Dam, the Rangers remained focused on their goals for the fall, and have set their sights high for the coming Spring.

Tune into The Roundup for more crew team updates!