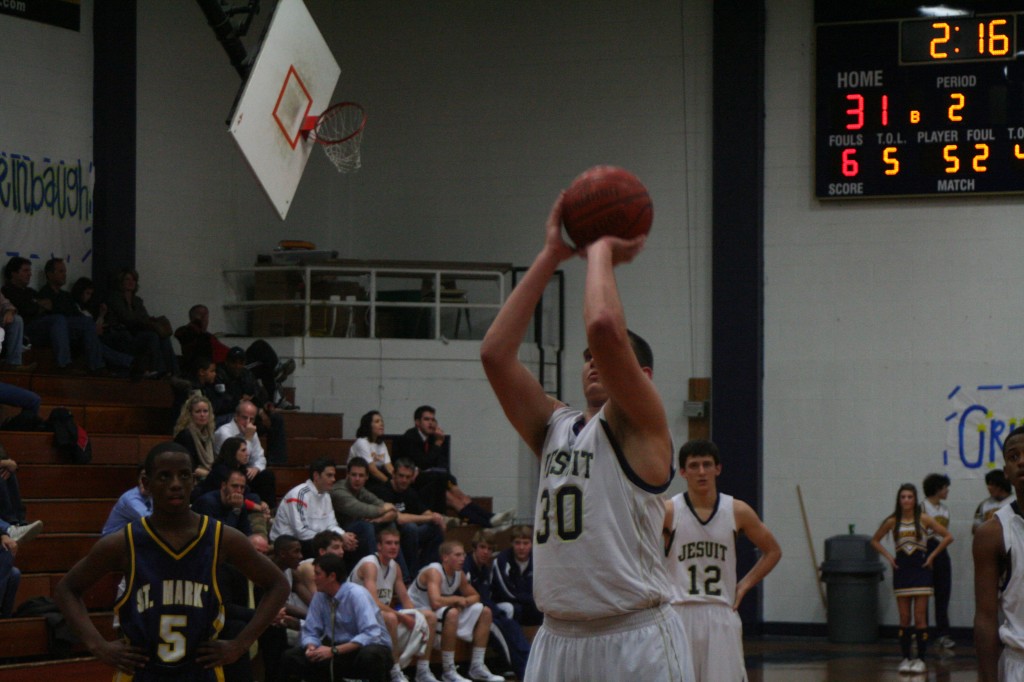 On December 9, 2014, Jesuit held the second annual Teddy Bear Toss in the Walsh Gym against Killeen Shoemaker. Jesuit, who won the Knights of Columbus Tournament just the weekend before, was looking to extend their win streak to 4 games. Unfortunately for Jesuit, the game did not go their way. Killeen shot their way to victory in a 56-49 win over The Rangers.

At the start of the 2nd quarter, the Wolves went on a 7-2 run, cutting Jesuit’s lead to just three. Killeen started to force a few Ranger turnovers which led to easy transition baskets for the Wolves throughout the second quarter. Although Killeen made some plays, the Rangers stayed ahead going into halftime with a 29-21 lead.

In the third quarter, Jesuit’s control over Killeen finally came to a halt. The Wolves started to get hot from beyond the arc and hit numerous threes. Joe Fimian ’16 said, “Killeen did a good job of breaking our press and because we pressed there were men open and they started making threes.”

At the start of the fourth quarter, Jesuit trailed the Wolves 42-35. Despite being down, the Rangers continued to compete as always. Jesuit forced a few turnovers down the stretch to stay in the game but they couldn’t quite keep up with the Wolves. At the end of four quarters, Killeen Shoemaker outlasted the Rangers winning 56-49.

Although Jesuit lost, guard Rusty Landon ’16 commented “we competed well and it was a game we easily could’ve won. We just had too many mistakes that cost us the game.”

Coach Hill described the game as “a rough one” and gave props to Killeen saying, “Shoemaker was one of the more athletic teams we have faced and they executed their press very well.” Coach Hill went on to say, “It was our first time facing pressure like that and I hope we were able to gain some valuable experience from it to get better for district.”

Even though Jesuit lost, the event itself was a success. The Teddy Bear Toss, started last year, donates all teddy bears brought in by fans to Children’s Hospital. After Jesuit’s first field goal, the fans threw all of their teddy bears onto the court to donate. The fans were able to fill up an impressive five large garbage bags full of teddy bears, which were delivered to Children’s Hospital Wednesday morning.

Come support Jesuit when they take on Cedar Hill in their next home game on December 20th, 2014.