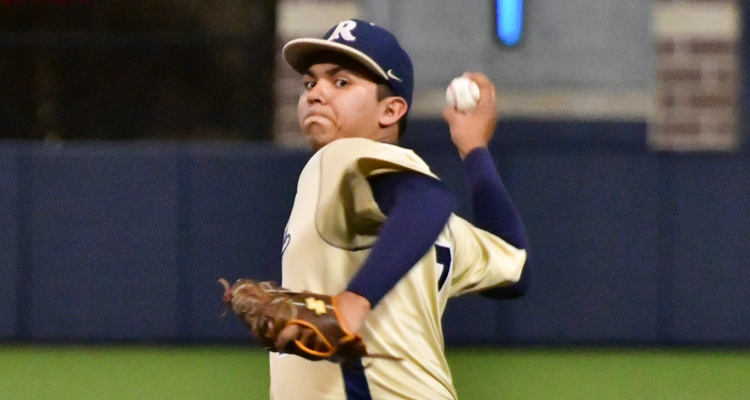 The Jesuit Ranger Baseball team participated in the Frisco Baseball Tournament, playing 6 games between March 9th through March 11th. The Rangers played against the likes of Frisco Liberty High School, Liberty Christian, Little Elm, Mckinney North, Lovejoy, and finally Plano. Jesuit went 3-3 during the tough 6 game stretch, putting them at 10-8 on the season up to that point.

In the Rangers’ first two games, they faced foes Frisco Liberty and Liberty Christian, going 1-1 on Thursday March 9th.  The Rangers dominated Frisco Liberty, winning by a plus 7 margin, with a final score of 8-1.  Star senior pitcher JJ Montenegro was on the mound for Jesuit, striking out 9 batters in his phenomenal outing.  The Rangers got stellar play from seniors Mark Ready and Will Guzman.  Following their terrific win over Frisco Liberty, the Rangers faced a tough opponent in Liberty Christian High school, losing the ball game 1-10. Peter Delkus ‘18 and Casey Snelson ‘17 shared time on the mound throughout the ballgame, each giving up 5 runs in the hard matchup.  Left fielder Bijan Kamalipour ‘18 played well for the Rangers despite the team coming up short.

On Friday, Jesuit took on Mckinney North and Little Elm, finishing 1-1 at the end of the day’s competition.  The Rangers’ first opponent, Little Elm, fought hard to eventually tie the game in the 5th inning, but the Rangers pulled out a gutsy win, winning 2-1.  The Rangers were led by junior pitcher Tyler Murrah, as well as John Guzman ‘17 and Jaden Woodson ‘19.  After pulling off a great win earlier in the day, the Rangers sadly couldn’t finish the day 2-0, losing 1-4 to a fantastic Mckinney North squad which currently holds a 13-1 record on the season.  While Jesuit senior pitcher Heath Vankirk had a terrific outing, striking out 7 batters and only walking 1 batter, the high powered Mckinney offense overwhelmed the Jesuit defense.

Finally, on Saturday March 11th, the Rangers split their games against Lovejoy and Plano High School, going 1-1 on the day.  The Rangers took down Lovejoy through the fantastic pitching of senior Miles Okamoto, winning 4-3.  Okamoto has continued his fabulous senior campaign, striking out 8 in the win, stifling the Lovejoy offense.  Jesuit also got stellar play from Mark Ready ‘17 and Will Guzman ‘17.  When asked about the team’s performance in the win, Okamoto thought that “the Lovejoy win showed how our hitting can put together good at bats and [we can] score a game winning run when we really need to.”

Looking to close out the Frisco Baseball Tournament strong, the Ranger took on Plano, but sadly came up short, losing by a score of 3-0. Senior Wyatt Hasson and junior Chris Irby took the mound during the loss, each striking out a pair of batters.  Despite the tough loss to close out the tournament, the Rangers finished 3-3 overall through the 6 game stretch, and they now see what areas they need to improve on. Okamoto later stressed the importance of their preparedness for each game, saying that “going into district, I think the most important thing is focusing on taking it one game at a time, and one batter at a time.”
The Rangers began District play on March 14th, taking on the likes of Coppell, Richardson, and Skyline.  Be sure to follow The Roundup for all of your baseball coverage!