More
JesuitRoundup.org is brought to you by:
Home Viewpoint Culture Hypocrites and False Prophets: Colin Kaepernick 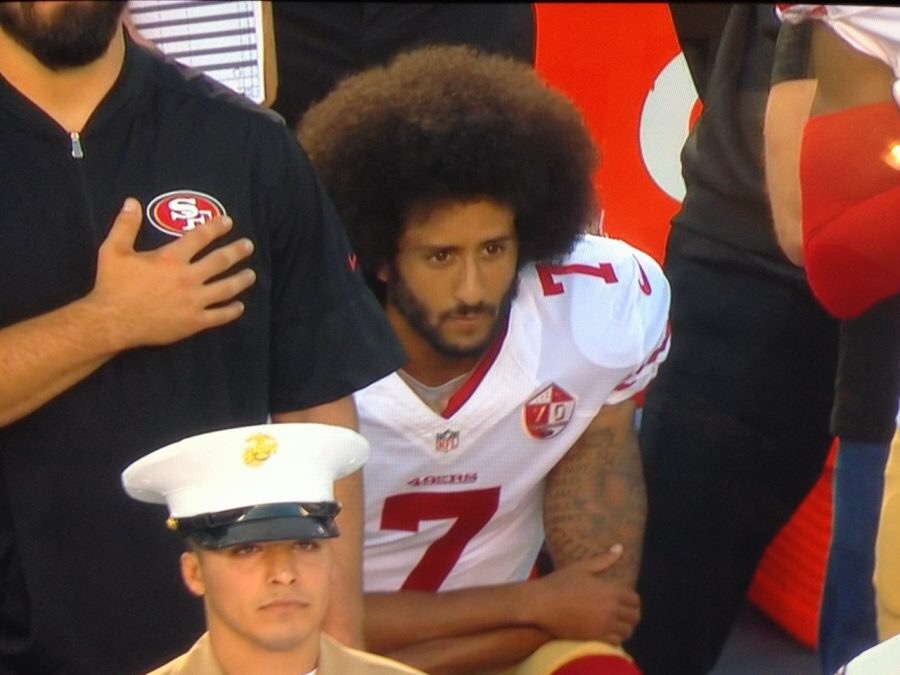 The Roundup invites and encourages all students to submit articles that reflect their personal perspectives regarding politics, culture, student life, sports, art, music, or hobbies.  The Roundup does not endorse any particular point of view.

Many storylines followed the NFL into Superbowl XLVII. The long rebuilding San Francisco 49ers had finally found their groove after the decades of ineptitude following their loss to the Atlanta Falcons in the 1999 NFL playoffs. Fans thought good times were here to stay, while the Baltimore Ravens made one last ride for the retiring Ray Lewis, who sought to go out like Mike, with the biggest prize in the sport.

Brother coached against brother, and a battle took place at the quarterback division, between the upstart Colin Kaepernick and the dependable Joe Flacco. Kaepernick was viewed as a revolutionary new type of quarterback, able to uplift the niners in a way injured quarterback Alex Smith had failed to, while Flacco was expected to put in a Dilfer-esque performance and be carried by his defense to a win. Flacco walked out with the MVP, and Colin Kaepernick walked out a loser, but regardless both walked out well-paid.

On another note, at the 1968 Summer Olympics in Mexico City, the summer after the assassination of Dr. King, controversy hung thick in the air. Already African protest had seen South Africa and Rhodesia kept out of the games for the racist, white-minority run states, but with their planned boycott falling through, John Carlos and Tommie Smith, world-class runners and classmates at San Jose State University, sought other ways to raise awareness for the racial discrimination in the United States in that summer.

So facing death threats, after Tommie won gold and John won bronze, they took the stand shoeless to raise awareness of their people’s poverty, hand raised in a fist against those who would call them lesser, beads against the lynching they would soon be threatened with, and OPHR (Olympic Project for Human Rights) badges on their jackets to project their message of human rights.

Likewise, Peter Norman, the white Australian silver medalist, wore the OPHR badge and refused the demands of the Australian conservatives to meet them with a white power salute, ruining a moment that’s lived on beyond him. All three men at the apex of their sport on the podium of victory, made a decision that their message was greater than the chance to repeat their accomplishment. Each returned to a hostile country, Smith and Carlos booted directly out of the games after their protest, to continue the fight for rights back home.

Meanwhile, from his peak at that Super Bowl, Kaepernick only fell.

The new Levi stadium that the team’s success had brought seemed to be cursed. Jim Harbaugh had been fired, and Kaepernick’s star had fallen, even as he sat behind the safety of a well-paying contract. Finally made a second stringer, Kaepernick decided it was time to take a stand, or rather the opposite, displaying the profound courage to sit during the National Anthem of a preseason game, with all eyes having forgotten he was there, until the act.

Having taken drastic action to say very little, other than a continuation of Black Lives Matter protests already spread throughout the United States, he created a conversation about how he hates the military and is ungrateful and hypocritical for not having done this sooner. He’s now swapped to a knee instead of sitting to be less offensive to veterans and to show how well thought through his entire plan was in the first place.

In the Olympians’ case, Smith and Carlos were acting against codified institutional racism present throughout the United States.

Kaepernick justified his protest with these words, “I am not going to stand up to show pride in a flag for a country that oppresses black people and people of color,” his statement as flawed as those who claim racism is dead simply because a black man was elected president.

“To me, this is bigger than football and it would be selfish on my part to look the other way,” so much so that he did until his career was dead. “There are bodies in the street and people getting paid leave and getting away with murder,” bodies Kaepernick forgets are of every race and color, as noted by the Guardian’s analysis of police shootings. [https://www.theguardian.com/us-news/ng-interactive/2015/jun/01/the-counted-police-killings-us-database].

Smith and Carlos protested at the apex of their careers as amateurs who risked poverty.

Kaepernick protested at the bottom of his as a multi-millionaire.

This is not meant to be a discussion of the issues facing black communities, or an advocacy of the wait for justice criticized in MLK’s Letter from a Birmingham Jail. Indeed, I would like to instead be writing an article praising Dwayne Wade, Demarcus Cousins, Lebron James, and the many other athletes who put their money where their mouth is; to not simply focus on police brutality, but focus on the issues of cyclical poverty and gun violence that plague many American cities, where too often these fatal shootings of unarmed black men occur; and to not make vague, unprovable accusations echoed by the extreme voices on both sides of our political discourse, but instead work for positive social change from a non-divisive perspective.

Even with the support of some heroes, Colin Kaepernick himself is not a hero; he cares more about creating conversations than creating change. Even as some bloggers praise starting conversations and raising awareness about the issues, talk remains cheap, and Kaepernick’s protest will inevitably result in nothing, even as more athletes begin to take the knee at half time, because it won’t be taking the knee that causes change. Instead, Kaepernick will continue to be at most a footnote in the history of civic protest, just as he will be in this NFL season.

That’s why, Colin Kaepernick is no hero, but just another hypocrite and false prophet.

Editor’s Note: This article is an updated version of what we previously published.  Changes in style and content were made to the final half of this piece to improve clarity and potential misconceptions of the writer’s views.