More
JesuitRoundup.org is brought to you by:
Home Featured Hockey Strings Together Three Straight Wins 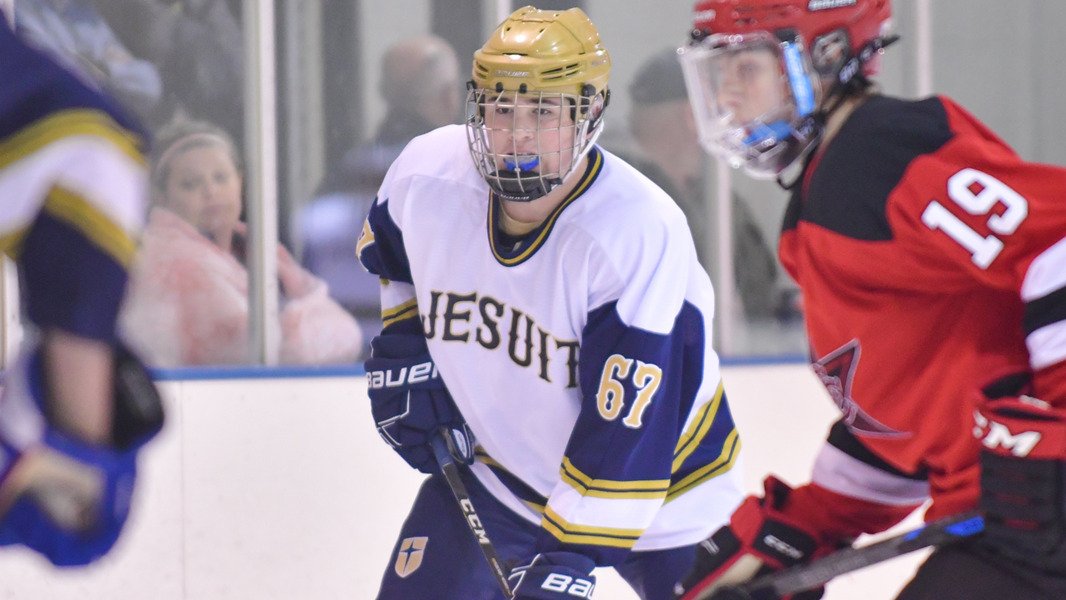 After a season-opening loss to Frisco, Jesuit hockey has surged, putting together three solid games to establish a three game win streak. During this time, Jesuit has beaten rival Highland Park, Allen, and Southlake Carroll. Here’s a quick recap of the games.

Initially, Highland Park jumped out to a 2-0, netting two goals in the first period. These two goals occurred at the beginning and end of the period, giving HP the momentum as the second period started. In the second, while Highland Park remained on the offensive and keeping constant pressure on the Jesuit defense, they couldn’t find the net again. Jesuit’s defense held firm and although they didn’t have many scoring chances, the Rangers gave themselves a chance going into the third period. And man did they capitalize. Starting with Seth Dragojevic, Jesuit popped off over a 8 minute span, pushing Jesuit to a 4-2 lead over Highland Park, a lead they never relinquished. Dragojevic led the Rangers with a total a three points, assisting two goals and scoring another. Other scorers include Nick Boss, Santiago Diaz, and James McCown, with McCown’s coming off a late, empty net goal as HP was looking to add extra offensive power by pulling their goalie. Luke Skaggs ‘20 said that he thought this win over HP was critical because “the week before we lost badly 8-3. With them being our rivals, I felt it really boosted our team’s focus and effort once we beat them.”

As most know, Allen remains a juggernaut in high school sports, as their large school population usually vaults them over the competition. However, Jesuit’s very own hockey team vanquished them on October 4th, winning 5-4 against the same team they defeated last year to win the state championship. Similar to the Highland Park game, Jesuit found itself in an early deficit, losing 3-1. However,  with the help of always reliable Dragojevic and senior Skaggs, the Rangers tied the game up, with Dragojevic scoring with 5:53 remaining and Skaggs following him with a score with 4:48 left in the second period.

However, with a little two minutes left in the 2nd period, Allen retook the lead, heading into the final period with a 4-3 lead. In the third, as Jesuit remained on the offensive for most of the period, Dragojevic competed his first hat trick of the season, tying the game up and giving Jesuit the surge of momentum needed. Junior Chase Neel ’21 capitalized on this as with only nine seconds remaining in the third, Neel netted the game winning goal, advancing Jesuit past the Allen Eagles. Bennet Croskey ‘20 commented and said that “beating Allen with nine seconds left in front of a noisy crowd” really helped rejuvenate the team, inspiring am even tighter bond that the team harnesses each and every game.

To cap off this phenomenon three game start, Jesuit finished with another solid win over Southlake Carroll, where they won 2-1. Once again, Dragojevic started the Rangers off, netting a goal in the first period to give Jesuit the advantage. The score was assisted by Santiago Diaz ’22 and Chase Phillips ’20. However, a little later in the first, Southlake tied the game up, taking a 1-1 tie to the end of the first period. It wasn’t until Diaz found the back of the net late in the 2nd before Jesuit regained the lead, a lead that never left their grasp again. Although Southlake ultimately out shot the Rangers, especially in the 3rd as they were looking to apply pressure for a quick goal, Jesuit goalie Will Carney remained a wall back there, garnering a .970 save percentage on the night, helping lead his team to victory.

Jay McCown ‘21 commented, “we are rolling, it been a good start to the season. We have really come together as a team early on, and that bind in the locker room has translated to the ice.”

Senior Chase Phillips echoed this message as he reaffirmed that the “connection held between all of us is a strength, allowing us to play together even in tough times.”

Stay tuned to The Roundup for more Jesuit hockey news!