More
JesuitRoundup.org is brought to you by:
Home Reviews Television & Film Harry Potter and the Deathly Hallows: Part 2 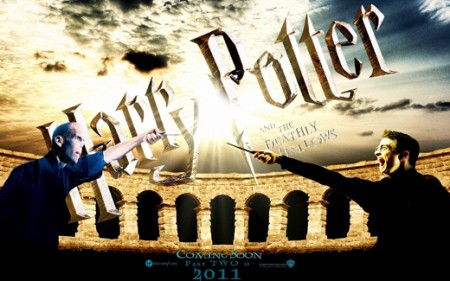 In spite of the hefty amount of pressure intrinsically involved in the concluding of an international phenomenon so vast in its appeal and so iconic in its cultural stature as J.K. Rowling’s Harry Potter series, the saga’s final installment, Harry Potter and the Deathly Hallows: Part 2, released this summer on July 15, 2011, had to be good.

It was, to borrow a phrase from Wall Street, too big to fail: Rowling’s book was too exciting, too movie-ready, too good to yield disappointment on the screen; the budget was too high; director David Yates was too tried, too familiar with the wants and needs of Potterheads; the cast members were too inextricably one with their respective fictional heroes and heroines. And the ending – oh, the ending – was just too good. Yes, since rumors surfaced years ago about a two-part Hallows, the finale was destined to awe.

And so it did.

From the solemn humanity of Dobby’s burial to the florescent culmination of the battle of Hogwarts to the warming closure of the three-way handhold atop Hogwarts’s ravaged stone bridge, Hallows: Part 2 moves perfectly, advancing with the swiftness and consistency of the dragon on which the protagonists take flight in the beginning of the movie, while stopping every once in a while to take economically from Rowling’s book its fleeting moments of poignancy.

It is, in its essence, an action movie of old tradition: it is full of life and death and love and good and evil, a quality which separates it from its decidedly narrow and forward- looking predecessors of the series. It does not concern itself with the nothing-scenes that plagued Hallows: Part 1, in which Harry would wander aimlessly in unexplained patches of snow, contemplating ad nauseam the temptation of the Hallows and the so-not-going-to-happen deterioration of his friendship with Ron.

No, the final installment takes its $250 million budget and has fun – all sorts of fun: statued, mammoth-like warriors come to life to march in thumping cadence and protect the castle’s entrance from equally mammoth-like ogres, no less; time stops in the neon glow of Voldemort’s Killing Curse as he meets his younger adversary in the Forbidden Forest; a vivid and imaginatively contrived dragon, mentioned above, crashes through the walls and chandeliers of the dignified halls of Gringotts, offering as it escapes an equally vivid landscape of a London submerged in fog below.

And, needless to say, Hallows: Part 2 benefits from the mature, skillful, and impactful acting that has graced the series for years. Alan Rickman’s portrayal of Snape stands out. While it is not unfair to consider the leading characters of the series static and unsophisticated, and thus their roles not terribly demanding, Snape, the unquestioned enigma of Rowling’s fictional personnel, presents a weightier challenge to his player.

Rickman’s performance as the Master of Gloom in the final installment at once chills and warms the audience, a contradiction so pertinent to the understanding of Snape’s role in the seven novels that it becomes his defining characteristic and, indeed, a manifestation of the series’ uniting theme: while grief and anger dominate his life, it his love, for Lily and for Harry, that reaches beneath both and provides him a compass and, ultimately, records him for posterity, the latter of which Harry reminds us as he speaks to his concerned son of the future in Rowling’s epilogue: “Albus Severus, you were named for two headmasters of Hogwarts. One of them was a Slytherin and he was probably the bravest man I ever knew.”

In these fashions does Hallows: Part 2 establish itself as a forceful and balanced film, one ripe with a proper glory that both empowers the viewer and inspires in him humility and reverence. It is an aesthetic achievement and an emotional hurricane. Approach with great hesitance, and perhaps disgust, its unfavorable critic; if he does not pledge allegiance to that inevitably present group of biblio-loyalists – literalists, more fittingly – eager to denounce any textual digression – a transgression it would be – of the movie, itself a relentlessly boring group with a stubbornly unintelligent message . . .  then he probably just has poor taste, or is not a human.