More
JesuitRoundup.org is brought to you by:
Home Clubs & Activities The Roundup Hail to the Chief: The Roundup Selects Blake DeLong to Lead 2015-16 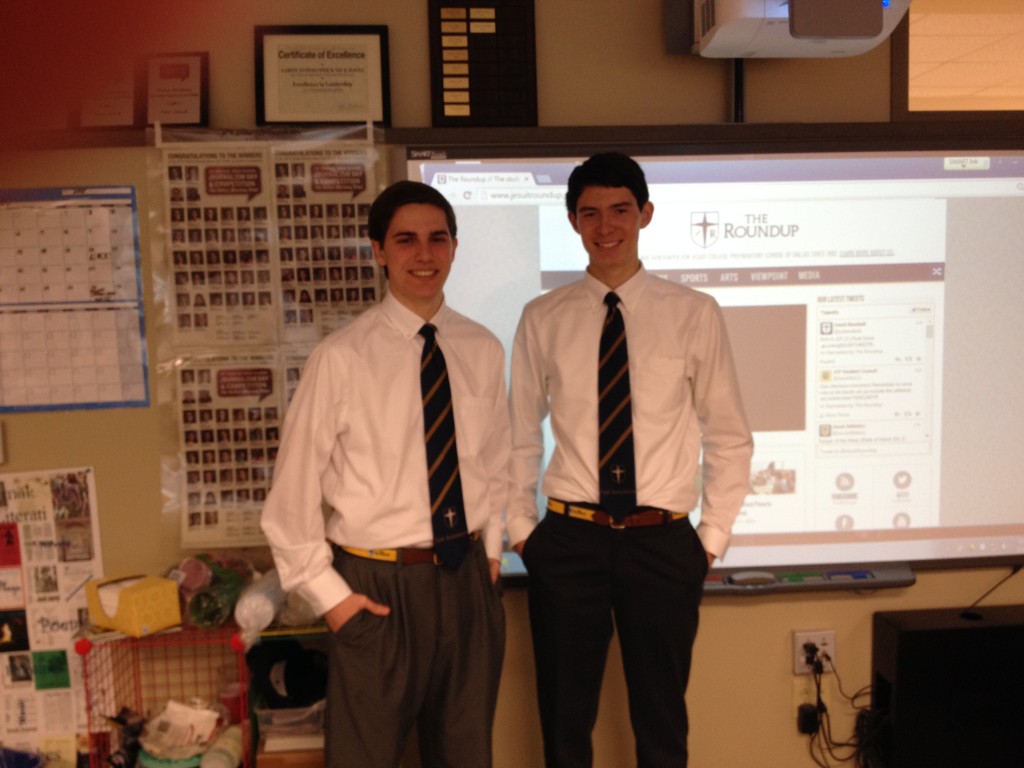 By the time you read this article, it will have undergone an incredible process.  By the time you glance at it quickly between classes, or take the time to complete it during a free period, it will have been written on my 2009 MacBook laptop, edited by two or more of the devoted Junior Editors, returned to me for revisions, and re-edited by the Junior Editors–all supervised by the editor-in-chief before final approval by Dr. Degen.

One might wonder who could possibly possess the dedication and passion necessary to oversee such a complex system.  At times I have asked myself the same question.  But year after year, the Editor-in-Chief never fails to provide astounding enthusiasm and leadership for The Roundup student newspaper.  Now, the Jesuit community welcomes the new Editor-in-Chief for the 2015-2016 school year, Blake DeLong ’16.

Dominic Iannelli ’15, current Editor-in-Chief for The Roundup, selected DeLong to be his successor after careful review of all the applicants.  In the end, Iannelli felt confident that DeLong could successfully carry on the mission of The Roundup throughout the upcoming year. Iannelli explained to me his reasoning for choosing DeLong, noting, “[DeLong] has already proven leadership.  As a junior, he was promoted from Junior Editor to Senior News Editor, the second junior ever to receive such a promotion.  In both positions, he exhibited strong work ethic and commitment to the newspaper.”

Similarly, Dr. Degen, faculty leader of The Roundup, expressed his faith in DeLong, describing him as a “dutiful, honorable, and committed young fellow.”

Before discussing his plans for the coming year, DeLong first voiced gratitude for Iannelli’s leadership as Editor-in-Chief, “[considering] [himself] very lucky to have Dom as a mentor in the process of honing [his] skills for next year.”  Additionally, DeLong thanked Iannelli for his help in the transition process, what would have been a “very daunting and probably impossible task if [he] did not have the guidance of Dom.”

DeLong brings an impressive set of goals and ideas to The Roundup.  First of all, DeLong is “going to work on organizing the way things are done in order to streamline the process of assigning, writing, and publishing articles.”  DeLong appreciates Iannelli’s work this year as Editor-in-Chief, especially his focus on “student voice in articles and encouraging writers to go out into the community to get diverse and interesting opinions,” and plans to continue Iannelli’s mission next year.

Throughout the 2014-2015 school year, Iannelli has attempted to “strengthen the camaraderie of the newspaper and make it more of a community” through such events as the Expository Bowl, a flag-football game against the Varsity Football team that some have said rivals even the Super Bowl in excitement.  Additionally, one of Iannelli’s biggest goals was to “make [The Roundup meetings] weekly events that the staff would look forward to.”  Iannelli believes DeLong has all the skills and drive necessary to continue building The Roundup community, believing that DeLong “has strong potential to do some big things in The Roundup next year…Blake has talked with [him] about finding more ways to improve writer-editor communication, as well as creating some new positions to help with organization.” Iannelli is “really looking forward to seeing him apply all his ideas next year.”

Let us all wish Blake good luck as he takes on a significant leadership role in the Jesuit community and continues to help shape the Jesuit narrative in The Roundup.

Hail to the Chief.