More
JesuitRoundup.org is brought to you by:
Home Viewpoint Politics Hold the Cheer: Reflection on Osama bin Laden 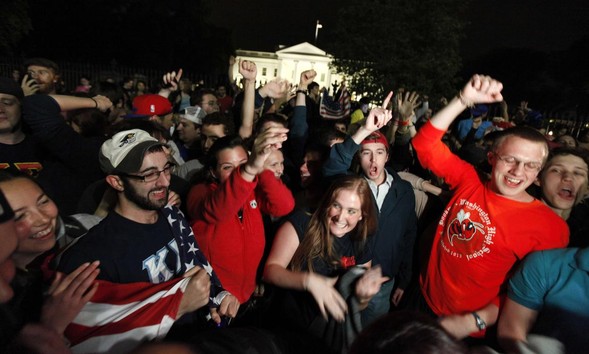 The stories of Americans who gathered in jubilation after the death of Osama bin Laden Sunday night initially struck me as glorious, inspiring, and empowering, to list just a few adjectives. I watched the Phillies vs. Mets game in Philadelphia, which was interrupted for more than 10 minutes in the ninth inning by “USA!” chants around the stadium; the thousands who converged upon Lafayette Park, young and old, democrat and conservative, to shout cheers for their great country; and of course, all those who did the same at the Ground Zero memorial in Manhattan that night.

Some underlying piece of the American ethos, visible to most anyone in possession of a left and right eye, invariably convinces our citizens of the need to suck in; stick their chests out; garb themselves in as much red, white, and blue clothing as humanly possible and rejoice in the name of all that is democratic and virtuous after tragic events.

Such reactions are natural and, from the perspectives of many, help make America the bastion of forward-thinking, more importantly forward-moving, progress that it is today. After all, isn’t this the country which responded so powerfully ten years ago to the greatest act of terror ever to cross its shores? Was it not America that avoided falling prey to national depression and sulking in the face of such adversity, but instead united as it hadn’t in years to seek justice?

It is that very same America. To fail to recognize this quintessential element of our society would be to misunderstand the American mindset on a most fundamental level.

But one group, it seems, at least in my short lifetime, continually excludes itself from this mold, the group of those directly affected by the tragedy at hand.

To my eye, it is not, nor has it ever been, they–the ones mourning the loss of a child, husband, wife, relative, or friend–who come out strong immediately with their American flags and megaphones, poised to start “USA!” chants of their own. Instead, these people seem quieter, more subdued.

Could it be that death has such an impact on people that it removes from them that natural American tendency to rally and rise up as a whole? I think so.

There has been no better example of this since 2001 than the death of Osama bin Laden this Sunday.

In what I now wholeheartedly consider the best radio interview I have ever listened to, National Public Radio’s All Things Considered program delved into this matter Monday when host Melissa Block interviewed two Americans whose family members were killed in al-Qaida attacks.

The first, Susan Hirsch, a professor of Anthropology at George Mason University, lost her husband in a 1998 al-Qaida bombing of the U.S. embassy in Tanzania. When asked her initial, emotional reaction to the news of bin Laden’s death, she does not respond with confidence, nor is there any form of satisfaction in her tone. Instead, she speaks with vulnerability and fear, present in the heartbreaking tremble of her voice she keeps throughout the interview, nearly cracking a few times into tears: “I felt an intense rush of emotion and probably confusion and maybe some fear.”

Regarding the cheering crowds in Washington and New York, she says, “It’s sort of complicated feelings about it. I completely understand the high emotions that we all feel at this news. But I’ve heard it described as celebrating his death, and that I can’t do. I can celebrate that the administration, the Obama administration was really committed to making sure bin Laden couldn’t hurt anybody else. But to celebrate his death is just – it’s not an emotion that I have.”

The second, John Vigiano, Sr., a retired New York City firefighter, lost his two sons, one a police officer and one a firefighter, at the World Trade Center on September 11, 2001. Vigiano, like Hirsch, speaks to Block, the interviewer, in an exhausted and damaged, hauntingly beautiful voice, complete with his unmistakable New York Italian accent.

He says to Block in regards to the death: “I was not elated. I wasn’t jumping for joy as if the Dodgers won the series or the Giants won the Super Bowl. It was very subdued because I saw too many people over the last eight years who were injured, maimed, whose families have been destroyed because of this evil being.”

So, perhaps it is more than mindless complaining, more than just an attempt by the left or right –the left, let’s be real– to find one more aspect of American culture worthy of criticism. Perhaps understanding the death of someone of bin Laden’s stature is worthy of more contemplation than that which it has been given, be it a practical contemplation–the death’s implications on our war in Afghanistan– or an emotional one–a reverence for the lives lost at the hands of the al-Qaida leader, as well as those directly affected by his actions.

In this way, it is my sincere hope that we as a community and nation abandon, or at least learn to mitigate, our national tendencies and follow the statement released by the Vatican Monday following the death: “Faced with the death of a man, a Christian never rejoices, but reflects on the serious responsibility of everyone before God and man, and hopes and pledges that every event is not an opportunity for a further growth of hatred, but of peace.”

Poignant is an adjective too commonly used for such an uncommon interview.