More
JesuitRoundup.org is brought to you by:
Home Sports Basketball Gold Out Game Winner 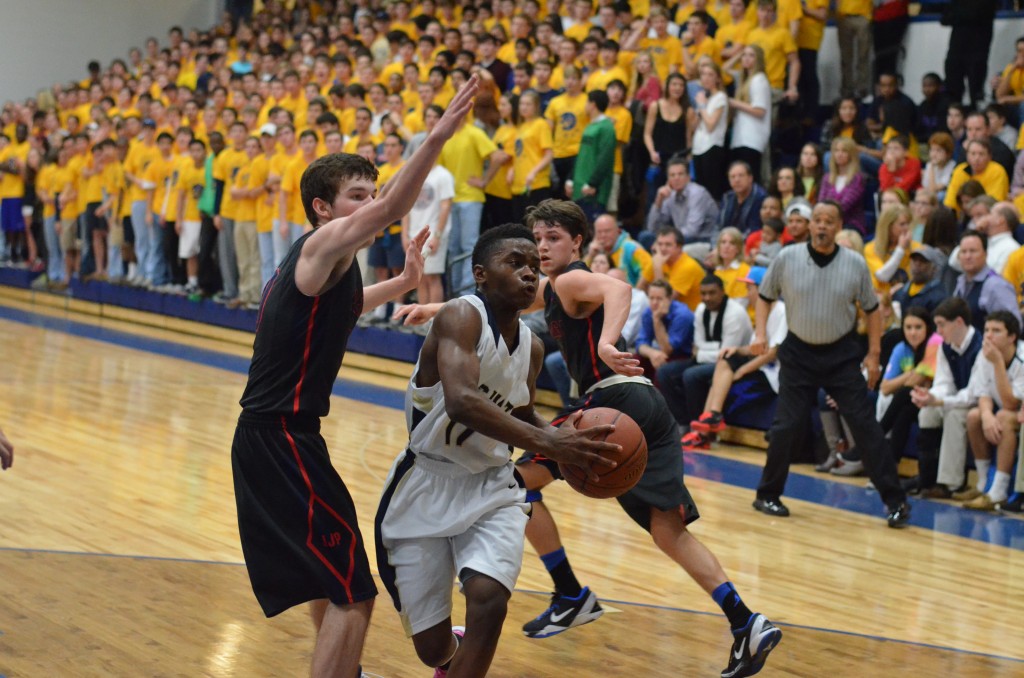 As Chris Koeijmans ‘14 shoots the free throw, chaos ensues. The Rangers and the Mustang players scrap for control of the ball. Jesuit forward Michael McReynolds ’15 seizes the ball and puts up a crazy fadeaway, which misses; however, with three seconds left, Matthew Bender ‘14 tips the rebound in for the put-back buzzer beater to win the game.

Jesuit, coming into the game with a total record of 6-11, and 2-2 in district play, needed a big district win at home in front of the Gold Out crowd. After a disappointing first half, Jesuit pulled out the victory at the last second, winning with a score of 36-35. 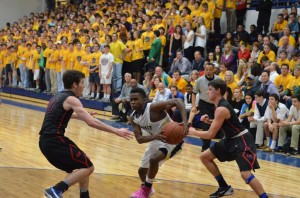 Coach Hill emphasized that “We are in playoff contention, and we need to gain some confidence in order to get there.”

The game began with heavy cheering, but Jesuit started off the game shooting the ball poorly. On the other hand, JJ Pearce started off strongly with some easy baskets and threes.  Before long, Jesuit was down and had to play from behind.

From then on, the Mustangs controlled the tempo of the game by playing their usually half court style of play, contrasting with Jesuit’s style, transition. At certain points in the game, JJ Pearce held the ball for about 40 seconds before shooting a shot.

This strategy drained the clock and nearly gave them the win. Going into half time, Jesuit was trailing 22-10 in a very low scoring game compared to the other games they had played. Returning for the second half, Jesuit looked strong, and seemed as if they had the confidence to come back and win.

During those 8 minutes, Jesuit started off well but forced a couple of shots. JJ Pearce was still holding the tempo, entering into the last quarter with a 25-18 lead. Then, everything changed.

Jesuit started to control the tempo, and the crowd was getting more vocal. To start off the last quarter, the student section cheered the “I believe that we will 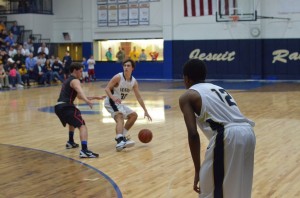 win” chant to get the team into comeback mode. Jesuit went on a good run, decreasing the lead by three, but the team could not get a single three-pointer to fall.

After a few missed shots from Jesuit shooters, JJ Pearce shifted the momentum and went on a run after hitting a couple of threes. With the Mustangs in front 35-28, they made an uncalled turnover when Michael Bejarano ‘14 got a steal and made an easy layup, accounting for 2 of his game-high 12 points, including 8 points in the final quarter. Also during the last minutes, Michael McReynolds and Brock Stepteau ’14 hit some clutch shots to bring the deficit down to 2 with 1 minute to go. 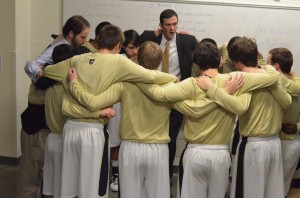 In line with typical basketball strategy, Jesuit started to intentionally foul the opponent. JJ Pearce missed some free throws in the final minute, allowing Jesuit the chance to tie or take the lead with six seconds left when JJ Pearce fouled Chris Koeijmans. He made the first, but missed the second free throw.  Jesuit then rebounded the basketball and Michael McReynolds took a contested shot to win, but missed. In the dying seconds, Senior Center Matthew Bender tipped it in to win the game. The student section went crazy and rushed the court in awe and celebration.

Now, there is controversy surrounding this last second shot. There is a video that shows both the clock at zero and Matthew’s hands still touching the ball over the rim. The referees called it a basket, but some people say that it should not have counted. Regardless, the officials could not overturn the call, and Jesuit won 36-35, scoring 18 in the final frame.

Looking to continue their confidence and momentum into their next few games, Jesuit plays Sunset Tuesday night and Richardson on Friday night in the Walsh Gym. Go Jesuit!