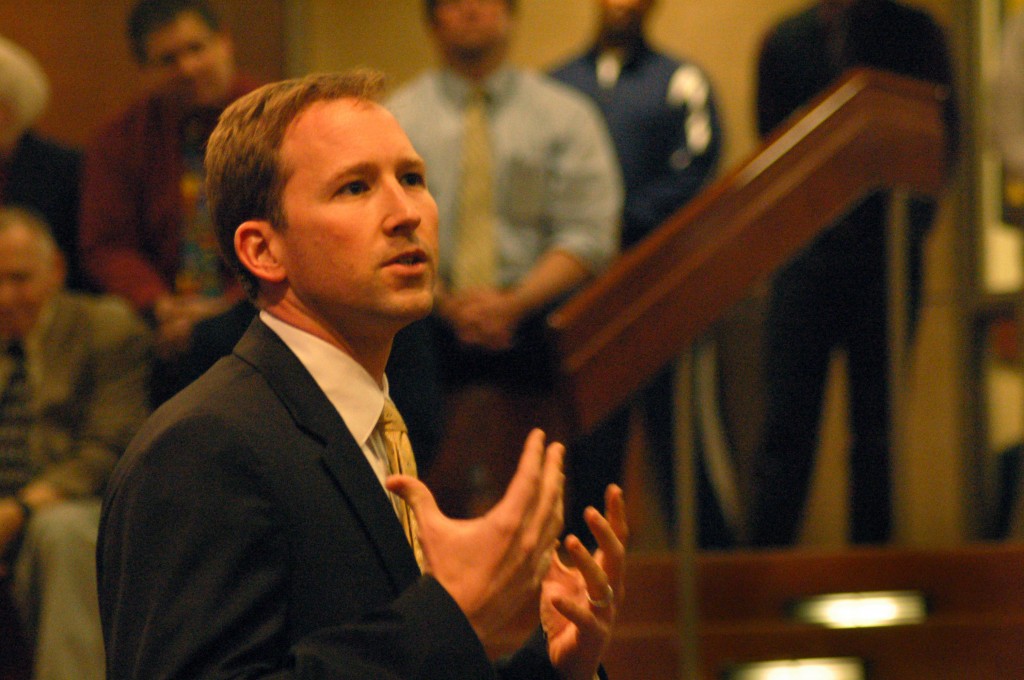 In The Roundup’s first press conference with Principal Mr. Garrison this year, a wide array of topics were covered, from the theater program to iPads and National Signing Day. In the 30-minute interview, Garrison reflected on his second year as principal and gave his take on the state of the school and various questions from The Roundup staff. Below are a few selected excerpts from the press conference.

Michael Lanham ’15: (After showing Mr. Garrison the hottest game on campus, Llama or Duck? and letting him play several rounds.) How do you feel about games like this?

Garrison: If you saw me, my attention was easily distracted toward the game and I worry about you guys in that regard. I think this stuff is here to stay, and I don’t think the answer is to hide it from you guys. Some people do think that’s the answer, but then we’re just delaying the inevitable because at some point you will get those electronics in your hands, during college or your career.

I think a good goal for you all is self-regulation, self-monitoring, self-management. My personal thing, which is kind of silly, is that I have a timer on my desk that I set for 20 minutes whenever I have something I absolutely have to get done. I start that timer and my rule is I won’t do anything other than that task. Sometimes I’m able to keep going, but sometimes I need a break. I would love to see more of that with you guys– I mean, I need my breaks. I like to play The Most Addicting Game and Frisbee Forever, but I have to do my work first, and I think there are some guys here that don’t do that. My concern is that some guys are just not self-regulating.

Andrew Frank ’13: In your second year as principal, what have been the highlights?

Community is very supportive of this place. Whenever I go some place, I hear kind things about you guys or the school. I love hearing about that stuff. It’s not because I made it this way, but I’m lucky that I get to be one of the people others tell it to. A question, though, that was asked of me earlier this year, in all seriousness, is what’s the secret? And I have really enjoyed playing with that question and trying to figure out the answer, and there are obviously lots of answers. I think one answer is the students. It’s just a building without students.

Parents, also. Parents buy into what we’re doing here and they’re very supportive. Faculty is top-notch, second to none. All these things together add up to really something unique. But one of the things I keep going back to to answer that question is that I think the extra-curriculars that our teachers commit themselves to– athletics, the newspaper, the yearbook, debate, theater– I think the enjoyment the faculty get out of that and the time that they give to you guys rubs off on you.

If you have something that you’re looking for or if you’re looking for something interesting or engaging and there’s a faculty member involved in that as well, I think that opens up a lot of possibilities for you and I do think there are some schools where that’s not as prevalent. That’s one of the things I keep going back to. I was at the school last night and there were guys still here at 9 (laughs). There is always something happening here.

Payton Maher ’13: How close to finished is the admissions process?

Garrison: Just starting. What’s happened is that everyone who’s going to apply has applied. Most of them have taken an isee test by now. Just about everybody who’s going to be interviewed has been interviewed. And then, next week, we will start going through everybody’s files for two days a week each week until Spring Break.

Maher: So you won’t know much about the students until you read their files?

Garrison: Mr. Host told me today that they all looked excellent (laughs). So that’s all I know. He talks to the principals from the schools where a lot of the students come from, and there is a feeling there is a really nice group here.

Frank: Do you think the iPad has had any adverse effect on the brotherhood at Jesuit?

Garrison:I only get concerned when I see guys sitting alone. And I don’t even mean that too much because I value alone time, too. I see a lot of guys sitting side by side showing each other their screens, which actually looks like a nice ice-breaker to me. I imagine an incoming freshmen class where you’re all from different schools– at least we have this game in common.

Maybe it makes things easier at first. I’m not as concerned about that as I used to be. I know you guys are given lots of writing assignments in your classes, so I’m not as concerned about the writing thing. The text culture of communicating is disturbing as someone who taught English. I know you guys are still being given assignments that challenges the skill of writing, which is good. I worry about the same thing.

Garrison:We are close to announcing that seniors can purchase their iPads at the end of the year for a fair price. When I say fair price, I mean basically what we can sell them for. So if you’ve taken good care of your iPad its going to be a great deal. Or you can give it back to us and we can sell it, because we obviously need new ones for our freshmen. We’ve decided to do new ones for our freshmen. We’re still working out the details, but we’ll probably have a two-year rotation cycle. So

a freshmen would probably get a new one as a junior

Hayden Vines ’15: How was National Signing Day at Jesuit?

Garrison:It was cool (laughs)– very cool. I don’t ever remember seeing that many cameras on campus. I was in the back but I saw at least three or four video cameras and people taking notes. I don’t know that we’ve had that much buzz in a long time. It felt like a very good vibe to me. The guys are going to good programs. We’re a competitive school now. When we first went into the UIL about 10 or 11 years ago people were unsure, but now I think we can be proud of anything we compete in.

Aidan Johnston ’13: What have been your favorite moments in Jesuit sports this year?

Garrison:I was on the Dublin trip, and I enjoyed that. The game was fun; I enjoyed the game. My favorite part about that as traveling on the buses with the students. Someone who’s in education asked me how that could be fun, don’t you worry about the kids doing something stupid. That never crossed my mind; everyone was well-behaved and I think represented the school very well. I never felt like I needed to hide myself from that group on the trip, if that makes sense.

For me personally, last year, I snuck out of here for a day and went down to the state swimming meet. I didn’t tell anyone I was going. I just went there and watched for about half a day, and then I drove back up to Waco and caught part of one of the basketball games. I was able to catch the second half of that game– I just love that. It’s so much fun to see our students in their element, doing their thing at a high level. It’s stuff like that I really enjoy.

Johnston: Do you think Jesuit athletics is at its peak?

Garrison:Try telling that to the class of ’92 and you get an argument. I think every year that graduates from here is the best year. I say that kind of tongue and cheek, but I have a picture in my office of my four closest friends, and to this day they can tell you third down, fourth quarter, and it was raining– c’mon, guys, let it go. But, yes, this is the best year…except for the other best years.

Frank: I think the theater program has been really rising recently with their last shows selling out. How do you see their influence on campus changing?

Well, a couple of things. Back to my earlier answer of faculty involvement– I think Mr. Myers has good balance and good perspective. One thing that I admire about him is that he seems to be able to bring lots of people in who might not have been interested in theater for some reason or another. The number of people who get in their heads that that’s something I can do seems to be rising. Personally, for me, I never acted in high school, but I had a friend in college who convinced me I could do it.

And I did every play I could get in to,  from then on. Mr. Myers seems to be doing that with you guys, which is wonderful, so that’s good. The addition of a technical theater class has been very good. Some students who might don’t get into acting, still get some joy out of those classes. Mr. Myers has gone out and found girls from other schools who are interested, and I think that’s good. He’s widened the net we cast too bring in actresses, which is a good thing. And then, because he’s been doing this for a few years, we have more seniors to do the one acts, so they’re bringing in more people. It’s just been growing steadily. There are other faculty involved too.

I know Mr. Von Schleinereid is helping out with music this year. I think Ms. Watson helped last year, although she’s busy this year with some things. Mr. Howard in development I know helps some. Again, that’s faculty involved who are giving their time to students who want to be there.