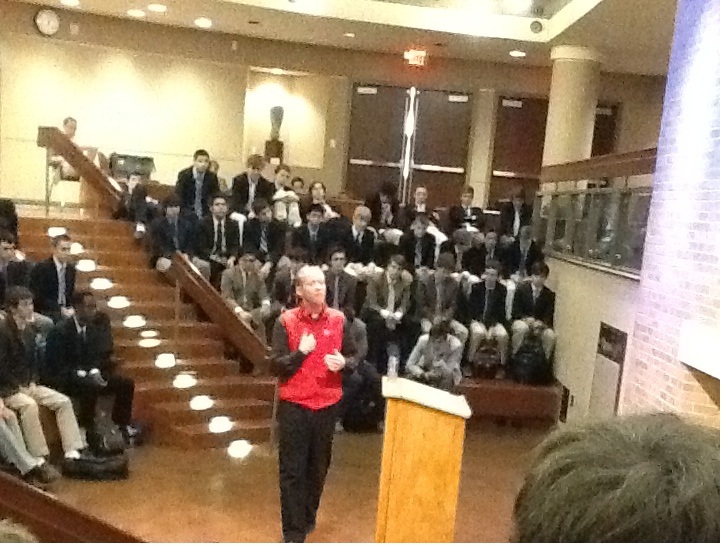 Who was that red-headed man who celebrated mass on Friday?  Fr. Drew Kirschman, S.J. is the vocation coordinator in Jesuit’s Missouri Province, but he currently resides in Denver, Colorado, where he teaches at Arrupe Jesuit High School. And chances are, if you had a theology class on Thursday, January 16th, you heard him speak about answering God’s call to a vocation in your everyday life.

Fr. Drew got in touch with Jesuit Dallas through separate connections with Mr. Jonathan Segal, Mr. Austin Emerson, and Mr. Matt Duross.  He came to Dallas for other vocational talks and alerted the Jesuit theology department about his availability on which they immediately jumped.  “We decided that it would be a great opportunity for Fr. Drew to engage our students in a dialogue on vocation, and luckily, he did not mind speaking for basically the entire day” explained Segal.

“A vocation is not only about becoming a priest” Kirschman stressed over and over throughout his talk.  He made the point that too often ordinary people hear the word ‘vocation’ and immediately groan about being called to the priesthood.  However this perception is not correct.  Vocations can be jobs, duties, obligations, or anything else that God calls people to do.

A talented public speaker, Fr. Drew opened the floor to any examples of Bible figures who were called by God to do some special task.  Immediately hands shot into the air, and students presented the examples of Samuel who was called in the night to be a man of God, Jonah who was called to bring the word of God into Nineveh, and Noah who was called to build an arc and save all life from a coming flood.  All of these men had one common thread – God chose them to perform a specific task or service to their fellow man.

In addition, Fr. Drew then brought up the story of Jesus’ baptism, again engaging the audience for help.  His favorite quote came when God burst out through the clouds, “This is my son with whom I am pleased,” which, again, Kirschman applied to the lives of all of humanity.  He continued to stress this point that no matter how seemingly insignificant we may be, God still has a plan for us.  His plan might not turn out exactly as we imagine, though.  “There is more to life than how much money you make or what titles you attain,” he put it.

Now how exactly CAN we take on this challenge of discovering God’s plans for us?  Kirschman simply stated, “We need to talk and listen to God.”  Whether it be finding that quiet place in your home, that special athletic activity, or even that certain state of mind, it is important to create time in order for God to speak to us. He spoke of the importance of removing oneself from the constant stream of information through our various devices and set some time aside for God.

Experience can also drive God’s call within us.  Kirschman spoke of his own experiences and how he met some Jesuits while in college at Saint Louis University. From there, he went on to work different jobs as a waiter, high school coach, and volunteer at a children’s home.  After feeling incomplete, he opened up to God and felt the urge to reconnect with those Jesuit friends from college, and he eventually entered the Jesuit order in 2000.  He urged the class of 2014: “explore different experiences in college to see where God is taking you.”

To close his presentation, Kirschman raised three points to consider: every day think deeply about what God is calling you to be, approach three faculty members at Jesuit and ask how they knew what to do with their lives, and pray for one another and take advantage of the Jesuit network.  Fr. Drew summarized his message in one sentence: “God has great things in store for each and every one of us and we need to seek out what that is and ultimately fulfill our greatest purpose.”