More
JesuitRoundup.org is brought to you by:
Home Sports Football Four Great Men 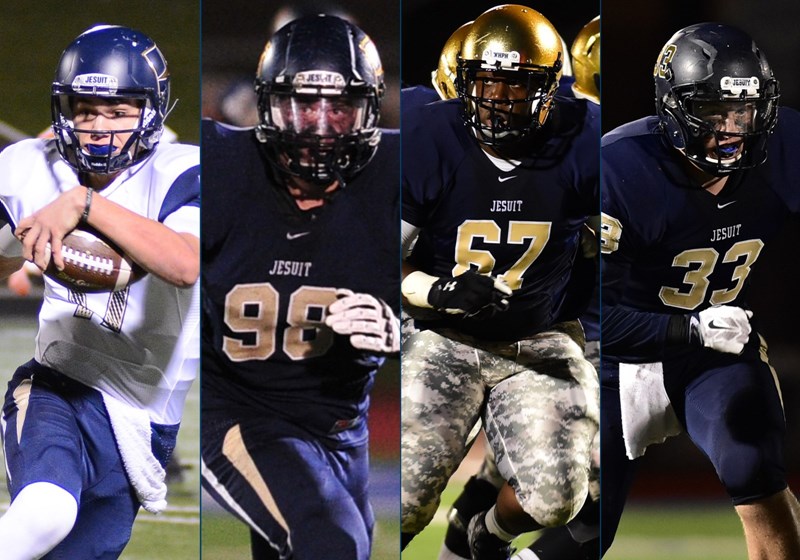 6:30 AM to 8:30 AM, Monday through Thursday, for 6 weeks in the summer, the Jesuit football team conditioned and worked out in the weight room, waiting for the upcoming football season to begin. While the players prepared themselves physically for the ups and downs of their formidable schedule, they also elected captains to function as leaders of the team both on and off the field.

Before the 2016-2017 season started, each player on the football team voted for four players to be captains. The four players with the most votes were seniors Dalton Allen, Jacob Palisch, Jordan Rice, and Jack Metz.

Starting at left guard, Dalton Allen cherishes the opportunity to “be a role model on and off the field, as well as a vocal leader [who] gets the team ready to go” whenever needed, whether that be “before or during a game or practice.” As a captain, Allen will represent the team at the coin toss before every game alongside his fellow captains, “which is a real adrenaline rush” for him. Additionally, Dalton looks forward to “expressing his feelings in a speech” at the football banquet at the end of the season.

Looking at the team, Allen believes they are “better than ever. Our team chemistry is solid and we are physically and mentally tough in order to take on any opponent on our schedule”. Allen also considers his fellow captains “excellent leaders” and “has full confidence in [himself] and [his] fellow captain that [they] will take this team far.”

Defensive End Jordan Rice mentions “everyone looks up to the captains as leaders meaning we have to lead by example for everyone else to follow.” Saying this, the captains (Rice included) are obligated to do the right thing and set the tone for the rest of the team. Rice also adds that the captains “make sure the team sticks together during the ups and downs during games and throughout the season.”  Rice states the captains are responsible for “making sure the team stays focused and that there is high energy” anytime on the field.

Quarterback Jacob Palisch is honored to be one of the great leaders of the football team. Palisch vocalized that “the main perk is just that we get to go out at the beginning of game to center field for the coin toss.” The main responsibility the captains face are “people looking to you and you have to lead by example, holding them accountable but also having them hold you accountable.” Palisch makes sure that his teammates are held accountable by “making sure everyone is focused and has energy, every day with no days off.” Palisch commented on his fellow captains: “I don’t think we could’ve asked for a better group of guys, both captains, and team.”

The nose guard Jack Metz said that he was “extremely excited to lead the team this year.” Metz also went in to add that he feels “very confident in [their] playmaking abilities, so [they] will definitely be a team to watch out for this year.” In addition, Metz communicated that “there isn’t anything better than being able to lead my brothers and my school in the fine sport of football.”

Excited by the captains and the potential for a great season, Head Coach Brandon Hickman looks “forward to them leading [the team] all the way throughout the season and into the playoffs. Concluding, “How the captains go is how we go,” so hopefully the captains will step up and be leaders both on and off the field.