More
JesuitRoundup.org is brought to you by:
Home Featured Forever Red, Harvest Hill We Dread 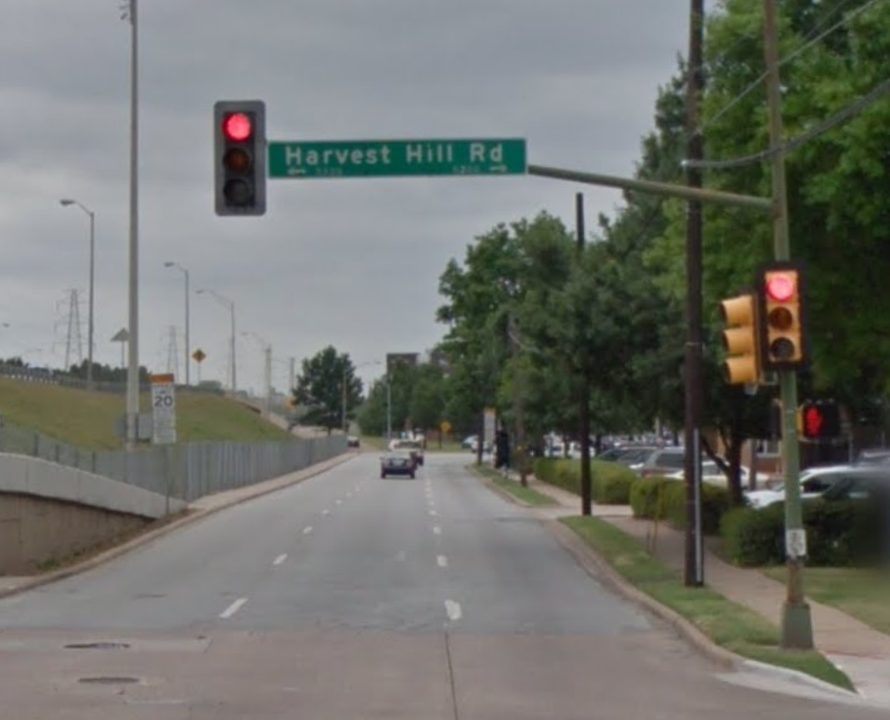 It’s three minutes before the 8:50 a.m. bell rings for the first class – or just three minutes away from when your extra-curricular instructor kindly requested you show up. Maybe you’re a senior and you had a long lunch after service and are racing back to make that mandatory(?) class meeting at 1:20 p.m. Or you’re just one of those impatient drivers that just doesn’t like to wait more than ten seconds at a traffic light.

You blow past the freshly green light of LBJ Freeway going south on Inwood Road ignoring the alternating, flashing yellow strobes of the St. Rita School zone in the morning. You trust that St. Rita is educating their youth to be aware of the dangers of the road. Or, perhaps, you’re going fifty miles per hour in a forty zone any other time of the day, you believe that maybe God will be on your side and you might just get to school on time. Mmmm…. No. Methinks not. Absolutely not. 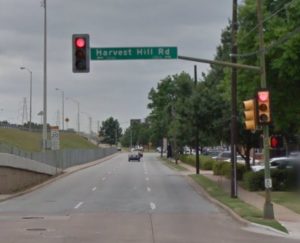 Chapter 1: Not So Legitimate Excuses

Wide is the gate of the destruction that arises when you are late:

Forever forgiving, God probably won’t bring eternal destruction to you. However, He wants to teach you a lesson so you don’t continue doing things that may lead to your eternal destruction. Those who want to seek God must prepare in this life. That’s what the stoplight on Harvest Hill Rd. and Inwood is for. It is yet another rigorous test of preparedness in this world. If you commute from the north side of Interstate Highway 635, you know exactly what I’m talking about. No $5.00 TEX-Press trip or 90mph race against the clock will save you from this.

That blasted light that will take those three spare minutes, give it the bird, then throw it into the dark abyss of wasted time. A true tragedy.

Many people in the Jesuit community share my frustration. Here’s what a few of them had to say:

“The Harvest Hill light is the bane of my existence. There is only one thing I hate more than it: our gas prices. If, on the last day of school, I get stuck at that light, I will speed through it. I will not have the last day of my Jesuit career ruined by a municipal light pole. Oftentimes, when I get stuck at the light (I say often because I get stuck there often), I contemplate downloading a movie to watch while I, or whoever else is in my truck, waits for the light to turn green on the timer that only Satan himself can keep. I have thought about watching Disney’s new Turning Red, but realize, that like the movie title insists, I am currently turning red while nothing happens. And, just like the movie, the whole situation sucks.”

Yes Thomas, maybe some entertainment would be nice for such a long, pointless halt. Heck, I’m sure you could even shave your whole face waiting for the light’s eternal red beacon to turn a triumphant green. Guys who commute from the north, you no longer have any excuse for coming to school with your chin and sideburns looking like the boroughs of the Amazon Rainforest. After all, in the Jesuit Handbook, it clearly states all Jesuit students are expected to be well groomed. Maybe I need new glasses, but that’s certainly not what I see on a day to day basis.

incandescently expressed his thoughts about the light as well, saying: “Harvest Hill is more like harvest hell. There have been so many times that I’ve passed over the tollway with the green light in my field of vision, only for it to turn red moments before I arrive. While this might sound like any other traffic light intersection, the fact that this stupid light stays red for four minutes while Jesuit taunts you in the corner of your eye is dehumanizing. Take the most horrible awful thing you can think of and multiply it by [Censored]. That is this traffic light.” After some other complaints that I cannot mention here, Max ultimately concluded, “This light is not a small problem, it is a crime.”

Blaming the light for his sporadic tardiness to band, Junior John Garza ‘23

shares a similar experience to me. We both play saxophone in band, and we’re the top two alto sax players in the band at the moment, and we’re both rolling in 15 minutes late. Without us, the band sounds like something is missing. This is his excuse:

“Think of this, you’re going to get to school just with enough time to walk in and not be tardy. But, you come off the ramp from DNT and the light at Harvest Hill is red. You think it won’t be long, but as the clock ticks by you think, should I just run it? Three minutes tick by before it’s finally green, but guess what? Now you’re late.” Our band teachers I think just automatically mark us as tardy unless we prove them wrong. Way to go TxDot.

Life is all about patterns. So we must study the light. I stood out on the intersection and timed the lights, and figured out the schedule of the light, so you may never be vexed by this atrocious, singular waste of city tax dollars again. This involved me looking like a fool on the corner of the underpass of the Dallas North Tollway. I observed the intervals of time each light cycle. Then just as most of you do in science class, I observed with a stopwatch and plotted the data. Sometimes you have to put aside your dignity to help your community. I came up with a function f(x) that reveals the schedule to the Harvest Hill/Inwood Light.

Feel free to use it. Dr. Gruninger, I want a 4.0 in my data analysis standard. You’re welcome:

Based on this equation, plug in “x” which is the amount of seconds after midnight.

If your “x” value is anywhere in this range:

Then the light’s gonna be red.

Chapter 5: Do Traffic Lights Have Sentence?

So what’s my proposition to fixing all of this? Well you could just wake up on time and deal with it. But who wants to do that? Next, and no offense to myself, but I doubt ANY of you will use that handy light function f(x) I cooked up. If we have a power outage, this whole schedule will become obsolete because the cycle will be offset from the droning, flashing, blinking yellow light that piles up traffic even more. Not to mention that the light could be equipped with technology so advanced, yet so stupid at the same time to monitor traffic patterns. If this is the case, it is undeniably warranted that it is choosing to discriminate against Jesuit students for some unknown beef.

As a community we must apologize to all three of the traffic lights, their control boxes and poles, because obviously someone pissed them off. Aside from that, if you do, however, commit yourself to using the schedule, you have won my respect and will be treated to a single hash brown or waffle fry (not measuring more than four inches on either length or width) from Chick-Fil-A with your choice of dipping sauce and complimentary Chick-Fil-A breath mint. Not all is lost.

Chapter 6: Being Open to Growth

Returning to Matthew 7:14 “few will find it [the path]” is a striking passage. How might we find this path? How can we find a better path for the commuters traveling South from North Inwood Rd? Like Jesus teaches, maybe the path is in front of us all along. Maybe we just need to see a different point of view. Maybe we must be open to trying new things. Jesuit teaches us to be open to growth, to open our minds and spirits so we might seek truth, and be formed into a brotherhood that will survive the many obstacles and prevail beyond the apocalypse. When the angels come down with their mighty brass trumpets and signal the end of the world, and conquer the wide path of destruction once and for all, they will know Jesuit students did it right! Brothers and sisters,

Amen, Amen I say to you, in order to find the path, we must be willing to try new things that no one else has done before. We  can be prepared all we want, but we must be adaptable to the wrenches life will throw at us.

Maybe the light isn’t solely about proper planning, but being open to exploring your life, seeking understanding of why things are the way they are, challenging rules that may bar a virtuous and servant lifestyle, a true Jesuit philosophy! 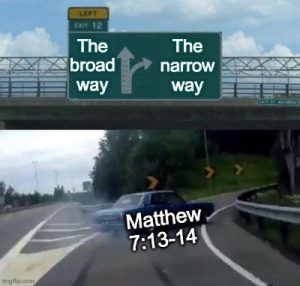 After all, Dr. Martin Luther King shrewdly states in his Letter from a Birmingham Jail, “The answer lies in the fact that there are two types of laws: just and unjust. I would be the first to advocate obeying just laws. One has not only a legal but a moral responsibility to obey just laws. Conversely, one has a moral responsibility to disobey unjust laws. I would agree with St. Augustine that “an unjust law is no law at all.”

If this stoplight is compromising your ability to do good in this world by stopping you from being on time to Jesuit to receive an education that fosters a downward mobility and service, then running that light is only a moral responsibility. Sure you’re breaking the law, but as long as you can justify you being a good, moral Jesuit student and citizen for America, I don’t see the problem.

When the traffic guard or a Dallas Police Department Officer asks you why you did it, seek the opportunity; roll down your window and simply ask: “why?”

Disclaimer: I am not a lawyer and this article is not intended to give, suggest, or compliment legal advice. The Roundup, and its staff are not responsible for any civil or criminal case that may occur at any intersection. As of May 17, 2022, the day this article was written, this article is not a defense in the following states: