More
JesuitRoundup.org is brought to you by:
Home Sports Football Lucido’s Bold First Half Football Predictions 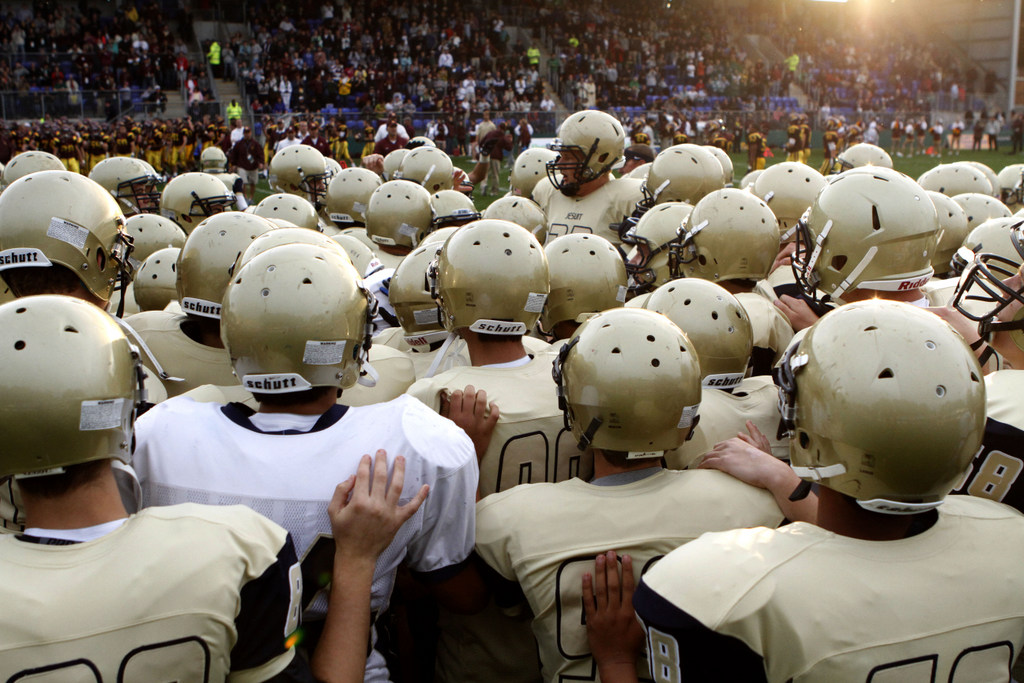 Rifling through the closet, pulling out the backpack you haven’t seen since last May, accompanying your mom to the tax-free sale at the local JC Penny’s to get your new school uniform: all these images signal one thing, the beginning of a new school year. With the rolling of eyes, the wild screams of desperation, and sighs of realization that come with embracing the homework of a new year also comes that sunshine in a storm, that candle in a window on a cold winters night, football season. Personally football season has always been that one thing that pushes me through the dog days of fall, high school football on Fridays, college football on Saturdays and the professional version on Sundays, football omnipresent through my weekends.

Here at The Roundup, we like to focus on those Friday night games, more specifically on the 2013 Jesuit College Prep Football Rangers. Last year, for those of you whose memory has been lost during the bright days of summer, the Rangers had arguably one of the best years in program history, posting a regular season record of 8-2, with huge a huge win over Loyola In Ireland. In post season action, the Rangers took on McKinney Boyd in the first round demolishing the Broncos 45-10 and earning themselves a bi-district championship trophy and a second round date with the Leopards of Longview High School. While the Rangers were overmatched by the Leopards team speed and quickness and lost the game, eliminating them from the 2012 season, they had a fantastic season to look back on.

The 2013 team will have the burden of following such a successful campaign, will a successful season of their own. Gone are offensive super stars Jack Brezette, Jake Oliver, and Will Brown and the anchor of the offensive line J.J. Gustafson. In for the Rangers is the new QB1, Bo Schneider ’15 and sidekicks running back Garret Amy ’15 and wide receiver Kellen McAlone ’14, guarded by an offensive line led by Jack Summers ’14 and Trey Elliot ’14. On the defensive side of the coin, the Rangers lose all starters except one, DT Taylor Stine ’15, but counter with varsity senior returners Kyle Shannon, and Justin Rotich on the D-Line, Hayden Clouse at linebacker and Tyler Kromkoski, Parker Rice and J.J. Boles manning the defensive backfield. Another key player to note is perhaps the Rangers most talented athlete, Orion Salters ’14, who earlier this summer committed to Iowa State. However Salters tore a muscle in his shoulder putting him out of football until at least late September.

With this in mind, what follows here is my, John Michael Lucido’s, personal first half game by game prediction of the Rangers upcoming 2013 season.

The first game of the season features Jesuit facing off against fellow Jesuit school St. Joseph’s Prep hailing from Philadelphia, Pennsylvania. St. Joseph’s enters the game as the top ranked private school in Pennsylvania, featuring RB/DB junior John Reid, the 98th ranked recruit in the entire country for the class of 2015, who has received offers from the likes of Penn State, Michigan State and Miami. After the pre-game festivities in which the stadium receives its new name of Postell Stadium, the game begins with the Rangers winning the toss and electing to receive. Early game jitters prove no match for quarterback Schneider.   His quick 5-15 yards, coupled with a big run from Amy, drive the Rangers quickly down the field,  finally reaching pay dirt when Schneider connects with WR James Smith ’14 on a 5 yard back shoulder fade. As the extra point is tacked on, it is clear that the Rangers spread offense and conditioning outmatch St. Joe’s. However Reid leads the Hawks back down the field as they score to tie the game at 7. Both teams score another touchdown and tack on a field goal as they enter the half knotted at 17-17. In halftime both teams coaching staff preach defensive intensity, the Hawks seem the more attentive of the two, as they march down the field with the first possession of the second half, scoring on senior quarterback Chris Martin 2 run scamper. They then tack on another 7 on a Garret Amy fumble, returning it for a touchdown but miss the extra point leaving the score at 32-17. As the game winds down the Rangers trim the deficit to 6 with another score but can’t get any closer. They drop the first game of the season.

The Rangers take on Keller Fossil Ridge in the third straight match-up with the Panthers. After a huge week of practice, in which Coach Brandon Hickman preached mental toughness, the Rangers offense seems to be completely different on this first Friday of September. Bo Schneider gains confidence early on and never loses it, spraying the ball around to his receivers all night, almost at will as his offensive line gives him a beautiful pocket in which to operate. He throws for over 400 yards, 172 of those going to McAlone, and spots the Rangers 52 points. The Rangers D over-matched by the Fossil Ridge all night comes up with a big pick by Tyler Kromkowski with 12 seconds left to preserve the victory.

The Rangers receive a visit from friendly foe Strake Jesuit from Houston. The Rangers give Crusaders a big welcome by scoring 24 unanswered points in the first half. The defense plays solidly as well, as Justin Rotich has a coming out party with 2 sacks and a forced fumble. The Rangers beat the Crusaders so soundly that the backups get to play the entire 4th quarter.

Having two weeks to prepare for possibly the biggest game of the season vs. Skyline, Coach Hickman and his staff create an idea to motivate the team. He calls a mandatory practice on Saturday night before the game at midnight. The team arrives sluggish, tired and angry at why they need to be at school at such an ungodly hour. They board a school bus and drive to an abandoned cow field in a small town called Forney, Texas, where suddenly it begins to rain heavily. He has the team get out of the bus and run up to the nearby hill and back down in the pouring rain, 36 times, one for every player on the roster. This moment really solidifies the family atmosphere of the team and they begin to chant, “Clear Eyes, Full Heart, Can’t lose.” With this memory fresh in their mind, the Rangers take the field against the Raiders with passion in their eyes. They come hot early, and only trail by 3 points against the heavily favored opponent entering half time. However the second half proved to be a different story, as the Raiders pulled away and proved victorious.

Defense proves to be the name of the game. A gridlocked affair finally breaks when Garret Amy returns a punt 69 yards for the first touchdown of the game. This play energizes the Ranger defense as John Wheeler ’14 picks off the Rams quarterbacks pass and takes it back to the house to add 7 more points. After doing the Terio “Ooo Kill ‘Em” touchdown dance he returns to the sideline where he is mobbed by teammates.

The game isn’t close from the beginning as fresh off the DL Orion Salters, returns the opening kickoff 106 yards for a touchdown. From that point it’s all Rangers, as they “saw them horns off” besting the Longhorns by a score of 42-0. The WT White Fans are disappointed, and try to start a post game fight after someone laughs at their co-district baseball champions t-shirts.

Hopefully if my predictions prove true, as I think they will, the Rangers should stand at 4-2 at the midpoint of their season. I will revisit this predication at the half way point of the season and provide my second half and post season prediction. To keep your mind off the crazy anticipation of my next article, go out and support your Rangers football team this Friday night at 7:30. Go Rangers!!