More
JesuitRoundup.org is brought to you by:
Home Profiles Alumni Five Years of Alumni Service Corps 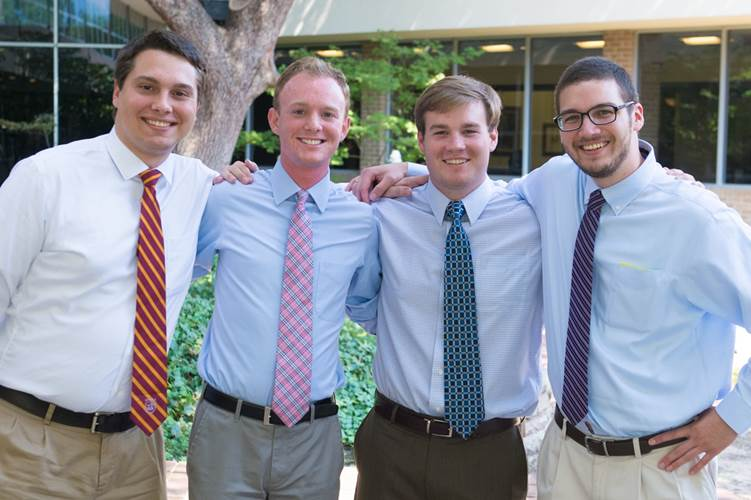 This semester marks the fifth year of the ASC program at Jesuit, bringing back previous graduates to serve, enjoy, and lead in the Jesuit community. So far, there have been 18 members, present and previous, involved in the ASC program. “Five of eighteen have stayed to become full-time teachers,” says Mr. Fitzsimmons ’76, senior guidance counselor and leader of the ASC program.

When selecting who will teach what, the decision is made “based on the needs of the school,” continues Mr. Fitzsimmons, adding that they “don’t always teach academic classes. This year, for example, the guys are teaching two sections of the senior social justice and public policy course.” It is common for the ASC guys to help with this course, considering they took it only five years ago as seniors and are probably more familiar with it than any other class. 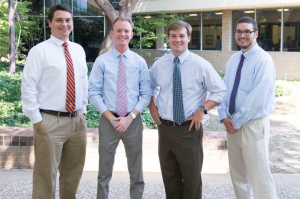 Mr. Myles Kelley, who graduated Jesuit in 2010, was involved in yearbook, Community Service Leadership Core, and Kairos Retreat as a retreat leader. Before returning to Jesuit, Mr. Kelley went to Boston College to study business and graduated from the Carroll School of Management. “I decided pretty late,” says Mr. Kelley, “I really wanted to focus on what I love and that is being at Jesuit. I love Jesuit. I also wanted to help with the formation because I was formed in such a cool way and I wanted to help [the students].” Mr. Kelley was also a senior during the first year of the ASC program and an ASC member taught him in one of his courses. Coincidentally, he was chosen most likely to become an ASC member, even though he thought he would “stay in Boston.”

Mr. Pete Hudson graduated Jesuit in 2009 and was involved in Interscholastic Community Service Core, Campus Ministry, Jesuit Musicians Union, Lone Rangers, and retreats like Kairos. He attended St. Edwards University and studied psychology with the plan of coming back to Jesuit. Mr. Hudson said that, “I always knew I wanted to come back to Jesuit… and when I heard about the ASC program I thought it was a nice transition from college into the working world and a good taste of being a teacher.” Mr. Hudson’s job in the testing center is to “make sure everything is organized” and on the day the students sign up, “to make sure all the tests are there and [keep] track of who is there and not there.”

Mr. Hudson is also involved in stage and film, where he will be helping with the tech team. Mr. Kelley, on the other hand, will be an advisor for The Last Roundup where he will be working in the newly added labs.

Graduating Jesuit in 2009, Mr. James Luisi was involved in theater, Beatles Club, and Jesuit Musicians Union where he sang; however, he said that theater really took up a majority of his time. He attended Loyola University in Chicago. He initially gained interest in ASC when he “received the letter inviting [him] back,” because he realized he could “give back to the school.” Mr. Luisi is helping out with the Social Justice Drama Troop to “help give the students a positive message but also to connect with the students and give them a positive role model,” he said. He will be helping them put their show together. Mr. Luisi said that he is “really lucky to be [at Jesuit].”

Mr. Pete O’Brien graduated Jesuit in 2010, and in his time here he played football all four years and then wrestled for two. After Jesuit, he attended Santa Clara University in California. Mr. O’Brien said that he first looked into the ASC program “when [his] brother Jake was doing it,” but he didn’t really come back to it “until [his] senior year in college, when [he] was looking at options.” He still wasn’t fully on board after sending in his resume but he “talked to Mr. Fitzsimmons more and more and more and it seemed like something [he] really wanted to do.” He said that ASC is a “one time opportunity and you can’t really come back,” adding that he made his final decision in May. Mr. O’Brien is coaching freshman football, helping with campus ministry and community service, and attempting to join another team after football season ends. The service sites that Mr. O’Brien helps with are Vanguard, the Isaac School, and Mosaic. He said he also takes a “special interest in Notre Dame School, because that was [his] senior service site and [his] brother Luke O’Brien went there.”

All of the guys teach Social Justice and Public Policy to seniors with the possibility of helping out with other classes next semester. They also all help out with the newly reformed testing center. All of Jesuit is looking forward to this year’s ASC program and is welcoming the new members with open arms.