More
JesuitRoundup.org is brought to you by:
Clubs & Activities Debate Jesuit Debate Annihilates the Competition at the State Tournament
Facebook
Twitter
Email
Print 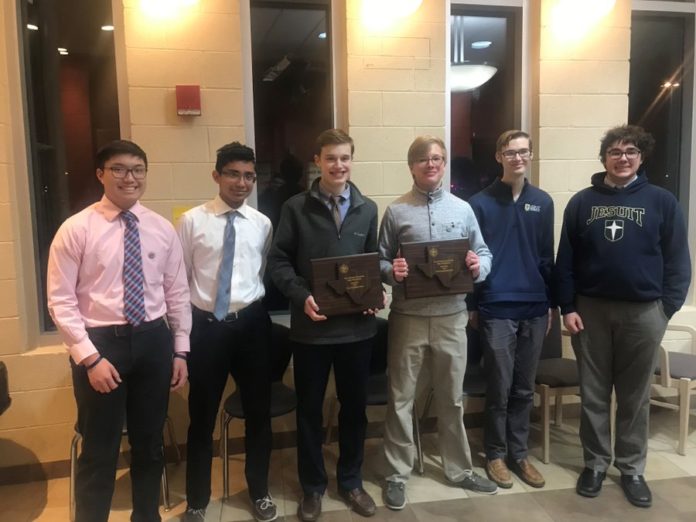 During the first week of March, Jesuit Debate competed at the Texas Forensics Association state tournament, sending three teams to El Paso battle. The state tournament marks a significant turning point in the Jesuit debate calendar, as it is the first, and this year only, post-season tournament that Jesuit competes at in the spring. It is also significant because the TFA State Tournament is considered to be one of the most competitive tournaments in the country. To qualify for the tournament, teams must earn points by successfully clearing qualifying tournaments throughout the regular season.  Additionally, unlike UIL, TFA combines public and private schools – regardless of population – in a co-ed competition. This is the 26th year that Jesuit Debate, coached by Mr. Lingel and Dr. McFarland, have qualified teams to TFA State. The tradition of TFA State tournament success is part of the reason alums Bennett Harrison ’15 and Jack Moore ’19 came back to coach alongside Lingel, McFarland and Mr. Pointer.

Day of the Tournament

On March 5th, Jesuit debate with senior team Adam Hall ’20 and Garrett Nagorzanski ’20 and junior teams Jack Martin ’21 and Joshua Ramos ’21 along with Gabriel Skariah ’21 and Justin Burns ’21 debated the first three rounds. They faced teams around the state such as Reagan High School (San Antonio), Westwood High School (Austin), and Winston Churchill High School from San Antonio. After the first three rounds, Hall and Nagorzanski ended the day with a 3-0 record, while juniors Martin and Ramos ended with a 2-1 and Burns and Skariah ended with a 1-2.

On the next day, the Jesuit debate team once again faced 3 important rounds, as they all would determine whether they competed in elimination rounds and, if so, what the seedings for the elimination rounds. After 3 arduous rounds, Hall and Nagorzanski scorthed the competitors with a 5-1 record while Martin and Ramos ended with a 4-2 recorded with Burns and Skariah losing a tough 5th round, ending the day with a close 3-3 record.

These preliminary round records helped Hall and Nagorzanski as well as Martin and Ramos to continue Jesuit’s 21 year streak of clearing teams to the elimination rounds at TFA, an active streak unmatched by any other school in the state.

For junior Justin Burns the experience of the state tournament was a growth experience. Burns said, “I’m pretty disappointed that Gabe and I didn’t do better, but it helped me recognize some areas to improve on, so I can do better next season.”

Unbeknownst to Hall and Nagorzanski, and their coaches, TFA State would be the last tournament of Hall and Nagozanski’s high school career.

When asked about their performance at the state tournament, Nagorzanski responded, “We were disappointed to lose in semifinals, but I think that speaks to the high expectations and results we pursued all season. Even though we didn’t come out on top, the preparation we put in for the team we ended up losing to helped us throughout the tournament in several debates. I think it was a nice conclusion to a very successful and consistent season.”

Hall also responded, “It’s always tough to go down so close to the finals. And at the time, I wasn’t aware it would be my last high school debate round. Regardless, I am incredibly proud and honored to have gotten as far as we did, and am satisfied with a long, successful career.”

Unfortunately, due to COVID-19, many of the other post season national tournaments were cancelled, making this tournament the last Jesuit debate tournament for this year.  Hall and Nagorzanski has qualified for the National Debate Coaches Championships, scheduled to be held at the University of Indiana April 3-5. Dr. McFarland, reflecting on Hall and Nagorzanski’s tournament and careers, had this to say:

“Both Adam and Garrett represent the reasons why I still coach.  I have had the pleasure of watching them grow as debaters, both personally and intellectually for four years.  The work and effort that they invested this year directly correlated to their success in the state and nationally. The fact they will end the regular season in the top 10 of the National Debate Coaches Poll demonstrates the respect they earned from coaches across the country.  I am lucky to have had the opportunity to work with them, and to be challenged as a coach to match their intensity and work throughout the season. I didn’t know going into the semis of state that would be the last time I had the privilege to coach them, but I am grateful that they are, and will continue to be a part of the Jesuit Debate family.”

Tune into The Roundup for more Jesuit debate news!