More
JesuitRoundup.org is brought to you by:
The Ashmore Family
Service Mission/Immersion China Immersion Trip 2016: The Trip of a Lifetime
Facebook
Twitter
Email
Print 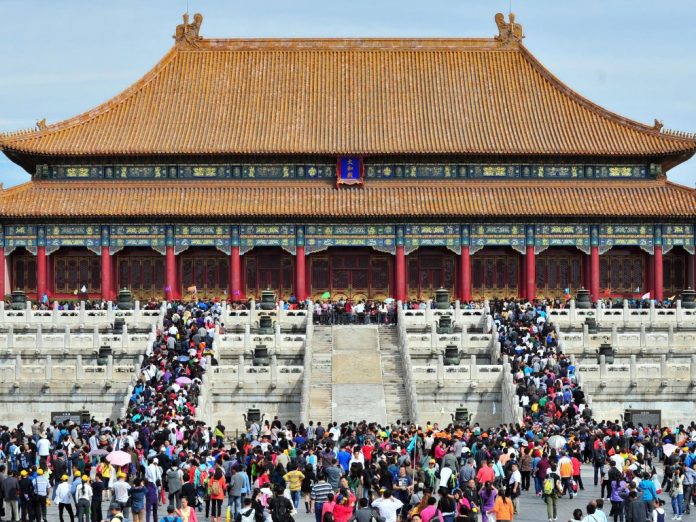 The crisp morning air swirled past the Jesuit student’s face. He gazed out over the lush green forest sprawled out beneath him, his jaw hanging open in amazement at the world he saw before him. He turned his head, glancing at the endless miles of fortress cutting through the canopy. This was the scene before Jesuit students and teachers at the Great Wall of China.

This past summer from July 18th to July 28th, Mr. Joe Wood ’08 and Ms. Margaret Rodriguez accompanied fourteen Jesuit students on a ten day immersion trip of a lifetime. The group journeyed across the globe to China! This was the first year for the China immersion program at Jesuit, and rising sophomores, juniors, and seniors were eligible to venture with the chaperones. Faculty members Mr. Wood and Ms. Rodriguez anticipate this trip to become an annual occurrence here at Jesuit.

The Jesuit students first flew into the capital, Beijing, where they stayed for around two thirds of the voyage. The group then took a train down to Shanghai and stayed there for three days, experiencing the history, culture, and beauty of the ancient city.

As soon as the Jesuit students landed in Beijing, they participated in an intro talk of what would happen on the trip. Mr. Wood commented that they then “hiked around the middle of Beijing and through the neighborhood we stayed in.” Mr. Wood also described the man-made imperial lakes they toured in Beijing and the Temple of Heaven as truly immaculate. The students also participated in a history walk of the city, and they were able to visit the astonishing Forbidden City.

One of the more intriguing and breathtaking activities this group of students did was an overnight campout at the Great Wall of China. Mr. Wood in a word described it as “awesome.” He then continued, “We had a Chinese barbecue, with grilled food and a bonfire, and then we camped out next to the Great Wall.”

However, the experience at the Great Wall did not captivate some students as much as other experiences. Nick Wilson ‘18 decided one of his favorite parts of the trip was “eating at a certain restaurant after we went to the Forbidden City. It was like a hot pot restaurant where [the chef] would give you raw meat and then you would put the meat into a boiling pot of water and cook the meat yourself.” 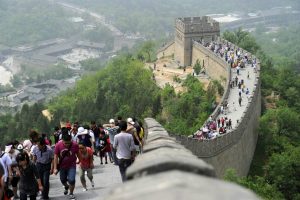 After the Great Wall endeavor, Mr. Wood told The Roundup, “We visited a Jesuit Study Abroad Center in Beijing, and we listened to a talk from a Jesuit who works at the Beijing Center.” A plethora of old relics and artifacts in the Beijing Center fascinated the Jesuit students from the moment they walked through the door.

Then the group took the bullet train down to Shanghai and immediately started an urban hike through older neighborhoods in the city.

The guys then went to a CCP propaganda museum to check out older propaganda in China’s history, and the group listened to a talk on the evolution of propaganda over the decades. Junior Nick Wilson was also captivated by this museum, thinking it was “pretty interesting. We saw a lot about the founding of the Party and its history.” The group then toured the main river in Shanghai, the Bund, and took a ferry to see the sights along the river.

Finally, the group traveled back to Beijing and ate lovely dinners with homestay families in modest neighborhoods. This was Mr. Wood’s favorite part of this trip, saying, “It was the best activity we did…. I felt like the guys were being taken out of their safe zone and put into someone else’s environment. The guys really had to adapt completely.” Mr. Wood thought the guys acted great during this part of the trip and they reacted well to the environment. Wood, continuing his praise of the students, noted, “It was probably the most ‘out there’ thing for them, but it was interesting for me to observe them trying to adjust to an environment that they had no idea what it was going to be like.”

All in all, the China immersion trip 2016 was a trip of a lifetime. China is such an amazing place because it is a country with multiple faces. It’s a country of extremes and it’s a country of oxymorons, as there crazy expensive cars all over the streets of Beijing, but at the same time you might find a donkey pulling a cart. If you are considering going on a summer immersion trip, the 2017 China Immersion trip is definitely one to consider.