More
JesuitRoundup.org is brought to you by:
Home Profiles Faculty & Staff Father Postell Returns to Jesuit 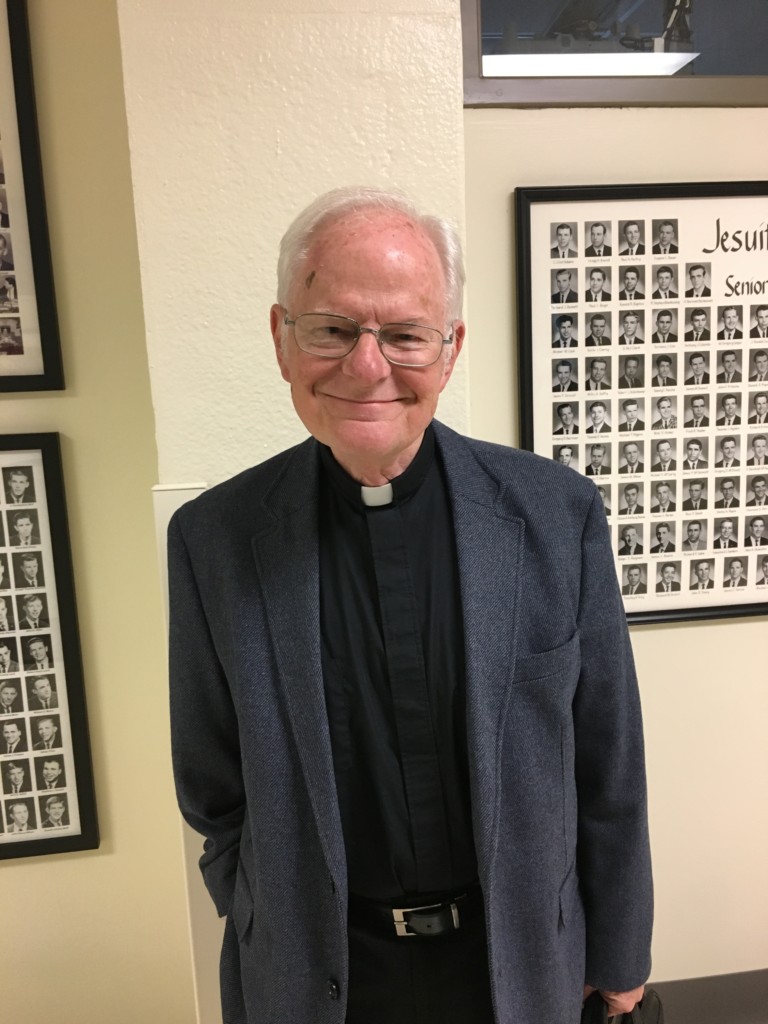 “I think Jesus would be at home in the school if he would return. I used to hear a lot of things about building community and I still think that’s a priority.”

Returning from his sojourn at Brophy College Preparatory School, an all-boys Jesuit high school in Phoenix, Arizona, Father Phil Postell S.J. returned to Jesuit Dallas as Chaplain at the start of this year, additionally assisting with fundraising.

I sat down with Father Postell and heard his thoughts on the state of Jesuit and the Jesuit experience.

Already in the swing of things, he noted his experience with the classes so far. “I attended the Community Days for the seniors and that seemed to go very, very well. I was just delighted with hearing them and seeing their reactions.”

He noted the differences he saw between Jesuit from when he left to now, explaining how “the spirit of the place seems to be very positive and remains unchanged, maybe it’s even gotten better (as) the kids are very friendly and courteous.”

He additionally remarked on the new changes to the facilities, especially to the cafeteria, noting how the change in lunch has caused the community to grow stronger.  “[The students] seem to be visiting one another– maybe that’s a fact of the new cafeteria; faculty is engaging as ever, hyperactive, and interested in their students. I don’t know how I would measure it but that really has resulted in a positive impact on morale.”

He additionally talked about the new facilities that were added while he was gone. “I came here and found that the gym had been refurbished–which is to say, new bleachers, a new floor and new access routes to the second floor of the athletic tower. The baseball stadium wasn’t finished when I left so that’s a complete renovation. It is staggering, and probably surpasses any other high school stadium I ever saw in Arizona.”

He also discussed the future plans Jesuit has involving facilities. “From the standpoint of buildings well, I found out that the school is in the midst of a capital campaign. [T]he building plans include the building of a new Chapel.”

Fr. Postell continued with his own plans for Jesuit, stating how he would like to “raise more money for the endowment so kids could afford to go here.”

I then asked him what his favorite part of Jesuit was, and he responded with a sensible message of modesty:

“I think sometimes in American education we get distracted about facilities. And I would like us to stay focused on the student–student morale, student spiritual formation, academic strengths, even aggressiveness. I don’t want to buy into the great American myth that great facilities make us better, and I’m not so sure I agree with that. So long as we take into consideration student formation priorities focusing on extracurricular growth, along with academic excellence and spiritual formation. I guess that would sum it up, it would fall under growth.”

He went on to point out the difference in educational styles between Jesuit schools and public schools, “I noticed, as opposed to many public schools, Jesuit has a high rate of the student body in extracurricular activities, and I think a lot of formation takes place out of the classroom, as well in the classroom, provided that they are encouraged to participate.”

He ended on a positive note, stating that Jesuit has maintained its spirit over time, in that “it continues to be as welcoming as I remembered it.”

The effect of Father Postell is felt in more than just the buildings and the prayer services. His dedication to the school has affected many members, as senior counselor Mr. Jack Fitzsimmons and head football coach Brandon Hickman can attest.

He then went on to describe his first meeting with the priest.

“My first year teaching at Jesuit was 1980, and I was coaching football at the time. Father was the assistant to the provincial for high schools and so he was visiting Dallas Jesuit and he was coming to the football banquet and he sat with me and another young coach and our girlfriends–(Mrs. Fitzsimmons before we were married, and we’ve been married 36 years so this was even before that).  He sat with us along with some other coaches and their wives and we had a great time. He always likes to bring up that he got to know me before I was even married to Mrs. Fitz. Our relationship kind of started from there and continues to this day.”

“After that, he was appointed the president of Jesuit in 1992 and I was gone from Jesuit; I’d gone to law school and was practicing law in the area, but I had done some committee work here at the school so we were able to keep in touch. I came back to Jesuit in 1994 when Father had been president for a couple years, and since he was president until 2011. I’m really glad that after 7 years he has returned to our community,” Mr. Fitzsimmons reflected.

He followed up by noting some of Father Postell’s most admirable qualities:

“He is student-centered–he really likes the students. Even when he was president, he didn’t try to be the type of guy that was just out there working with the adults. He’d really try to have a personal relationship with so many people, and he helped us get into the UIL. Even though people thought that was almost impossible, he was able to work hard with a lot of people and I’ll always remember that.”

“When I came back to Jesuit in 2010, I went into Father Postell’s office in August and asked him how to become Catholic.  I grew up Baptist, my wife grew up Catholic, and we got married in a Methodist church. I wanted to learn more about Catholicism and wanted to establish a church for my family to attend and grow more spiritually.  He gave me advice and explained the steps I needed to take. He also told me we had to get married into the Catholic church. That caught me by surprise, and told him I had been married for over 14 years, so that there must be a simpler or easier way. He said I needed to attend RCIA classes every weeknight after practice from August through April until Easter.”

“I called my wife and asked her if she wanted to get married again–which kind of threw her for a loop, but then I explained what Father had told me. After we discussed it more, we ended up convalidating our marriage in the Catholic church with Father Postell as the celebrant. It was a very small and intimate wedding but meant a lot to our family.  Our kids were the ring bearers and were very young at the time. So Father has changed my life and my family’s life from a spiritual standpoint, which we needed.”

“One thing about Father is I’ve always felt I could go to him if I needed some advice or help. He has that sense of humor that makes you smile and he loves Jesuit. If you have a stadium named after you, you’ve done some great things in the community and for our kids at Jesuit which he’s done for many years.”

“Father did our Mass [a few weeks ago] with our football team and the memories started flooding back into my mind when I was a younger coach at Jesuit.  I’m happy he’s back where he belongs at Jesuit Dallas where he spent so much of his time impacting many kids and families lives. I know he’s impacted my family.”

Truly, an institution has returned. Welcome back, Father Postell!