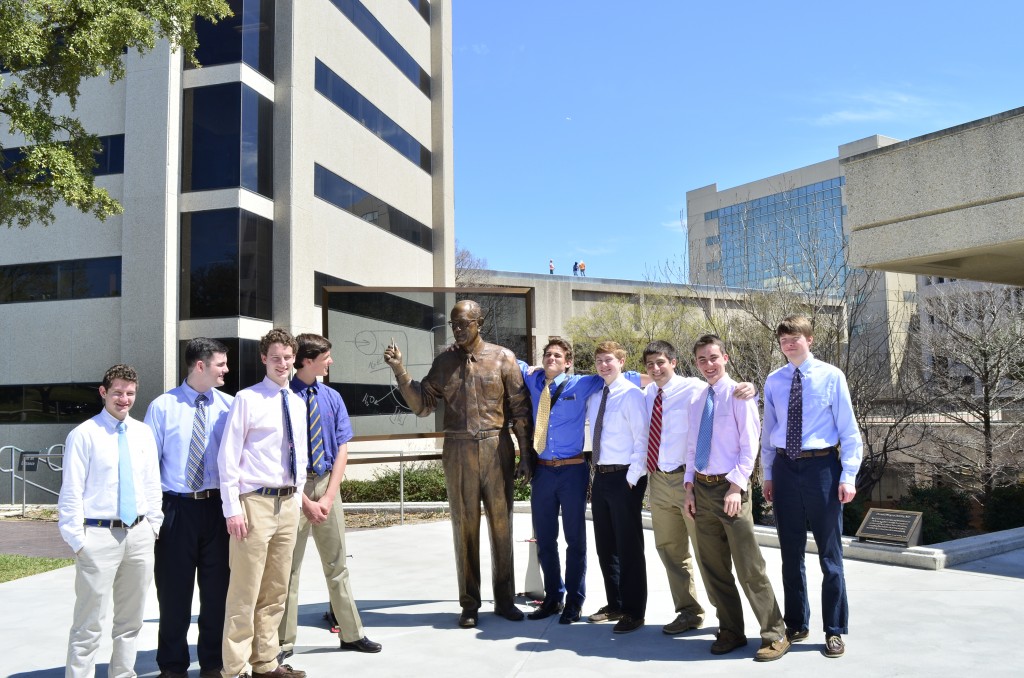 On Wednesday, March 25th, members of the Jesuit Engineering Society ventured over to the UT Southwestern Medical School as part of a field trip sponsored by the STARS, or Student Teacher Access to Resources at Southwestern, program. Students were granted the opportunity to listen to two guest lectures, both presenters working as postdoctoral fellows at the medical school, and were able to visit one of the research labs.

Ms. Julie Carver, the club moderator, organized the field trip last year, the first year of the club’s existence, saying that the medical school “had an advertisement,” and that “they were doing outreach to the community.” Since then, the club has visited the campus about twice a year. Each visit brings with it fresh content and different guest lecturers, allowing the same students to go on multiple trips.

After arriving, the students first listened to a postdoc describe her route to UT Southwestern. She recounted her childhood in Russia, her fascination with literature, and then her eventual career shift to become a researcher. She then informed the students of the grueling path that is necessary to finally become the head of a research lab, a goal that not even she had achieved after over ten years of schooling.

Next, the students listened to her describe her current project, which included developing a cure for autism by working with mice. Her time was spent isolating a gene that she hypothesized led to autism and testing the effects of altering this gene by performing various social tests on the mice.

After that, the students toured a research lab and gained more insight from some current researchers. The students were informed of the current project there, which included analyzing epileptic mice in order to determine the cause of seizures and how they can be prevented.

While there, the students were able to hold baby mice, view different stem cells under a microscope, and view the brain activity of a mouse before, during, and after its seizure. The researchers also explained the lengthy process of publishing research.

After a lunch break, the students returned to the site of the first presentation to hear from another postdoc, who shared his background story and current research project. Similar to the first presenter’s experience, this presenter had not anticipated entering the research field at the start of college, but he had found his way there after attending Villanova University and later UT-Austin.

His current work involved repairing the membrane of a cell. After developing a hypothesis, he began testing this theory on mice. In order to do this, the mice’s nerves in their legs were severed and treated with a glue-like substance. The treatment was mostly successful, and weeks later, most of the mice were able to walk again.

Ms. Carver shared her thoughts on the trip, saying, “It was kind of neat [that] it seemed like all three [presentations] were related.” However, her favorite part of the trip was “how they take the soft sciences and make it into something they can move forward with… interpreting the mouse’s anxiety, or how it’s feeling, or if it’s confused, based on how it’s swimming around in a tank… and then [moving] forward with treatments and developments.”

Similarly, Clay Phillips ’16 found the most interesting part of the trip to be the lab tour. “It was really interesting to see just exactly what researchers who are finding the answers to seemingly unanswerable questions, like ‘what causes epilepsy?’ are doing behind closed doors in their labs,” he said.

Ms. Carver also noted the importance of learning outside the classroom, saying the point of the field trip was “so [the students] can see what happens when you continue with these kinds of sciences… because some of the basic material can be pretty dry.”

She also shared some information about future field trips planned for the club, which hopefully includes returning trips to the Spindletop Oil Well in Denton, Texas. Finally, she noted the key aspect of the Jesuit Engineering Society: “how we’re always looking for new challenges and opportunities.”

If you are interested in participating in the Jesuit Engineering Society, please come to room A214 after school on Thursdays and assist in one of the three current projects: the wind turbine, the scale model of Jesuit, or the pedal car.