More
JesuitRoundup.org is brought to you by:
Home Viewpoint Politics Death of the Internet 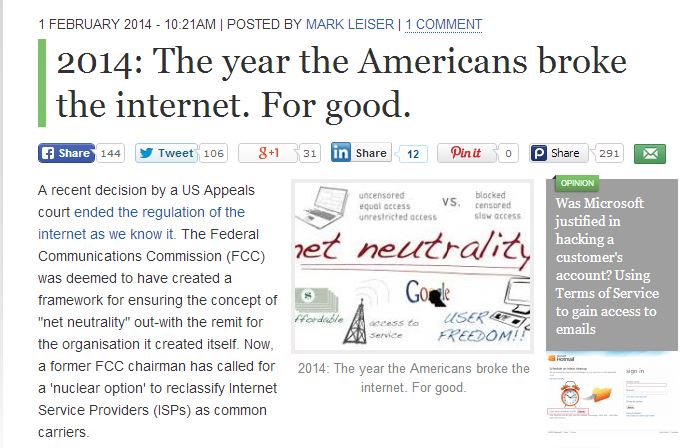 Do you ever watch Netflix? Browse Reddit? Stream games on Twitch? Do you hate buffering and slow connections? Well, that’s too bad because the FCC just put an end to net neutrality.

Now, you might be asking yourself, “what’s net neutrality?” Basically, net neutrality is what made all websites equal. With net neutrality, a service provider such as Verizon, AT&T, or Comcast cannot divide the internet into fast and slow lanes, lanes in which certain websites would have faster connections than others. However, now that the FCC can begin dividing individual website into these fast and slow lanes, only websites in the fast lanes will be able to provide high quality content such as video, computer animation, and other content that requires a particularly large amount of bandwidth.

In order to be placed in the fast lanes, a company will have to pay service providers. This is an issue because ISPs (Internet Service Providers) will now begin charging companies for the same connection that they previously had.

Big deals and buyouts are already taking place right now due to these changes. Twitch is allegedly being purchased by Google for a nice sum of $1 billion. Do you remember what happened when Google bought Youtube? They attempted to integrate it with Google+, practically ruining the comment sections.

Many ISPs such as Comcast and AT&T also provide television service, and they want to eliminate their competition. What’s the biggest threat to current television providers? Hulu, Netflix, and even Amazon. It doesn’t just end there. Many companies such as HBO, Comedy Central, Funimation, etc. will experience a large hit in speed unless they begin to pay more, and if they pay more, so do their customers.

Netflix has been one of the biggest victims of the tyranny of ISPs. Already, they have been forced to raise their prices and have been forced to go to court multiple times due to throttling (when an ISP cuts the speed of a customer’s connection to a particular website because they know that that individual website uses a large amount of bandwidth). And yes, throttling is already legal.

This is a ruling that should have never been made. In fact, the only reason this happened in the first place is due to corruption within the FCC. Current FCC Chairman Tom Wheeler proposed the new broadband rules, and it wasn’t too long ago that Wheeler was a cable lobbyist employed by Comcast.

This is an issue because it leads to an elimination of competition. Without competition, service providers will be able to capitalize on their monopoly and drive prices up while still offering sub-par service.