More
JesuitRoundup.org is brought to you by:
Home Sports Cycling Cycling Dominates the Competition 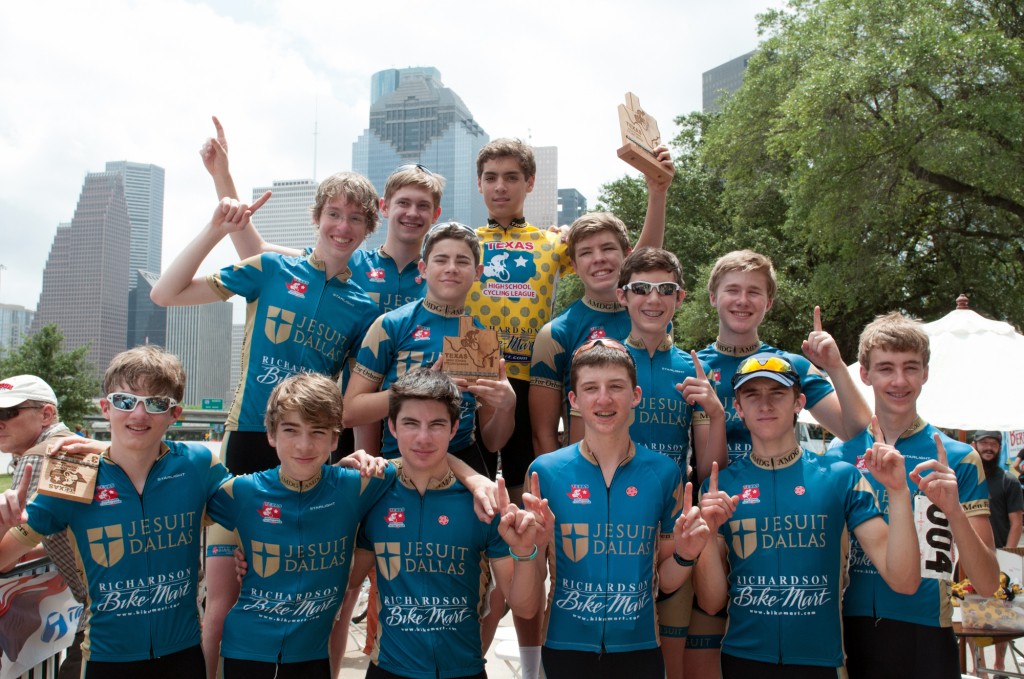 Their breathing is heavy. The Jesuit cyclists keep telling themselves to just keep pedaling. As the hot Texas sun beats down on them, the remaining cyclists see the end in sight. A few of them attempt to break away from the pack, but it is far too early. Then, all of a sudden, the final leg of the race begins. The cyclists give it their all, and in the end, it’s Jesuit who dominates the podium, with more than twice the amount of raw points than the second and third place teams combined.

On the weekend of May 10-11, the Jesuit cycling team competed at the Texas High School Cycling League state road championships and series finale. The team excelled, taking home first place in the season-long Boy’s Team Overall Championship. Not only did Jesuit place 1st overall, but it also placed first in all three of the different boys categories, JV, Varsity, and novice. In fact, the team did so well that it also brought home the Coed Combined Team Overall Championship.

In order to determine the best all-around team, the points earned by each cyclist in the Novice, JV, and Varsity throughout the season were combined into a total. Jesuit’s scores added up to a whopping 7,535 points in the Boys Raw Points category. To give a little perspective, the second place team, Williams Academy, only had 1,640 points.

In addition to the team’s overall success, many of the individual competitors also saw astounding results.

In the State Championship Road Race, the Varsity cyclists had to bike for 50 miles, while the JV cyclists biked for 45 and the novices for 30. The road race took place on a very hilly course, and the competition was fierce! Bishkin described the race saying “for the first lap or so of this race, it was pretty rough race. It was really fast and really hard… very competitive.”

In the State Championship Crit, the cyclists raced on a track comprised of a long, skinny course with a u-turn at each end, similar to a Formula 1 track. According to Bishkin, the difficulty of this race came from the u-turns “because those really split up the pack because people would sprint out of corners,” which lead to a much wider gap between competitors than in the road race.

In the Season-Long Overall Series Results, which was a total of four race weekends and nine individual races, Scala placed 1st and Thomas Baert ’14 placed 2nd in the Varsity. Meanwhile, Dalton Walters ’16 and Alejandro Joglar ’15 placed 1st and 3rd respectively, and then in the novice, Sam Olden ’17 placed 1st while Jake Ingram place 3rd.

“It was a very successful year,” commented Head Coach and Theology teacher Andrew Armstrong ’01.  Looking forward, Coach Armstrong went on to mention that “[cycling] is looking really good for next year,” noting that 15 out of the 18 cyclists will be returning next year and that he believes the varsity squad next year will most likely grow from three to six or more guys, depending on how hard the guys work and train.

“The races were, in general, really fun,” commented novice cyclist Jake Wilson ’17. Looking back at this very successful year, Jake found joy in the races, calling them “really enjoyable.” Jake went on to mention that he is “very excited to do it more next year!”

Coach Armstrong was particularly pleased with the effort that the team has put in, and he complimented them saying, “We’ve had more strong guys than we’ve ever had before.”

The team has big plans for next year, and they are hoping to add more, new stuff such as a non-scholastic tournament to see how they would fare. The guys on the team train relentlessly to see the results that they’ve achieved, and that hasn’t stopped. Many of the cyclists are still training, putting in time every single day, already preparing for next year. In fact, many of the guys ride upwards of 150-200 miles every weekend. That is true dedication as the guys have to give both their maximum effort and a huge portion of time.

Overall, the Jesuit cycling team performed phenomenally and established themselves as the best cyclists in the state by far. Considering so few of these cyclists were seniors, Jesuit’s cycling team is guaranteed to only improve.

Make sure to congratulate the team, and don’t forget to wish them good luck next year!